Dictator of the marine life in "the Tank" (formerly)

Spreading propaganda.
Ruling the Tank's marine life with an iron fist (formerly).
Coming up with evil schemes to conquer the reef village.

Remain as ruler of the Tank and keep anyone from escaping (both failed).
Conquer the reef village to regain his status as the "leader" and get his revenge on Sammy (currently).

Bibou "Big Boss" (formerly known as Big D in A Turtle's Tale 2: Sammy's Escape from Paradise) is the main antagonist of Sammy & Co and one of its prequel films A Turtle's Tale 2: Sammy's Escape from Paradise. He is a tyrannical seahorse who bends on trying to conquer the reef village in order to regain his status as a "leader" and get his revenge on Sammy after he was previously the tyrannical leader of all the sealife in "the Tank", the largest aquarium in the world.

He is originally voiced by Carlos Alazraqui in the film who also voices Denzel Quincy Crocker from The Fairly OddParents, while he is voiced by Matthew Géczy in the Sammy & Co series who also voiced his mother Lucille.

Sammy and Ray are taken to an aquarium with Lulu, a lobster with dissociative identity disorder and Jimbo a bug-eyed blobfish. Escape plans are run and tried by the leading seahorse Big D, one of then "escape plan" involving two small manta rays going into a dolphin's mouth so they can escape. It almost works until the two are devoured by two barracudas. Ella and Ricky set out with Annabel and Margaret, the pink octopus mother and daughter in order to rescue their grandfathers from D's oppresive reign. getting chased by the barracudas when they get there. After much communication trouble, Ella and Ricky interpret from Sammy that in order to escape the aquarium several squids have yo expel ink into the ventilation system, while all the aquarium inhabitants play dead. Before initiating the escape plan, Sammy and Ray get the tyrannical Big D into a fishbowl. The reluctant aquarium manager opens the emergency doors allowing all sea creatures out to freedom.

Around seven years after the events of the film, Sammy, Ray and their clan have set up home at a coral reef village in a few miles away from Dubai since there're dangers and predators everywhere in the big ocean and they found the village to be a safe place to live. Also around that time, Big Boss somehow escape from his fishbowl and he reunites with Marco, Philippe, and Jax. Together, the four found themselves a home at an abandon shipwreck that is located on the outskirts of the reef village. Throughout the series, Big Boss have been seeking his revenge on Sammy by trying to conquer the reef and "dethrone" him as the leader of the village. Many episodes would have him come up with various schemes to take over the village and he would sometimes successfully did, though he and his henchmen would always get defeated by Ricky, Ella, Pipo, and Annabel all outsmarting them. Also during the events of the series, Big Boss and his associates are allied with the Rockfish, a gang of three school bullies that consists of Glitz, Crudd, and Babbles whom they all admire Big Boss and they would often give him ideas to help him conquer the reef village.

Big D is cold, cunning, determined, megalomaniac, pretentious, and above all tyrannical. He is a selfish tyrant who rules the Tank with an iron fist with propaganda about himself attempting to rescue the other marine life from the Tank through his so-called "escape plan". In fact, he holds no regard for other lives and has no honor in him, as shown when he is doing one of his demonstrations of his "escape plan" involving two small manta rays going into a dolphin's mouth so they can escape. It almost works until the two are devoured by two barracudas, which Big D shows no remorse and makes an excuse that they got out of the Tank, thus proving himself as the monster he truly is.

He also loses his anger easily, as shown when things don't go his way, he subjects other to extreme punishments. This is shown when he trapped his cousin, Tremaine, in an ice cube for a petty excuse about the latter talking about him being no better in the past than he is in the present, instead of feeling remorse for his actions. Much of the sealife in the Tank is afraid of him, even his moray eel henchmen, Marco and Philippe.

Big D also has a habit of keeping all the sealife in the Tank under his control, whether being a despot or an anarchist. If one doesn't work, he will try the other. This is shown as during the majority of the movie, he ruled over all of the marine life by keeping them under his orders, but during the climax, he claimed, "Let it be chaos!" This shows that Big D will use either law or chaos to keep everyone under his tyranny.

It is later revealed that he doesn't truly want to leave the Tank, which shows that he enjoys being an evil tyrant who does horrific things, which also makes him a sadist. After he is shunned by the other marine life so they can escape the Tank with Sammy's help, two hogfish (Manuel and Consuelo) decide to keep living in the Tank as they actually enjoy it, showing that if not for Big D's tyranny, the Tank would be a safe haven for marine life to live. In the end of the movie, he is later trapped in a fishbowl, thus getting what he deserves. If this hadn't happened to him, he would probably have become a tyrant in the Tank once again for new years of sealife in the Tank to come.

Seven years after the event of the film, Big Boss's current goal is to conquer the reef village and overthrow Sammy to regain his status as a "leader" as well as getting his revenge on the sea turtle after the latter freed all the inhabitants from "the Tank" who have all now live in the reef village with Sammy. Despite his small stature, he is greatly feared by the villagers because of his tyrannical nature as well as his actions when they all used to live with him in the Tank.

However because of his selfishness, he has a very sensitive ego when someone offends his pride. This is seen in the episode "Big Boss the Hero" when, after he had a nightmare of being unable to take over the reef village, he loses faith in his strength and he nearly gives up wanting to achieve his goal. 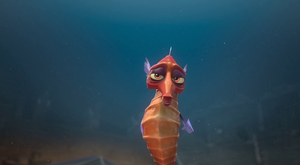 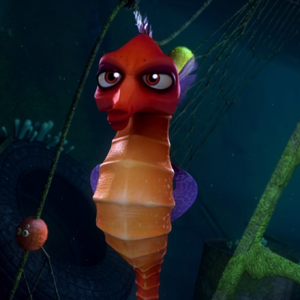