Tiny Toon Adventures: How I Spend My Vacation

to have Buster B. Rabbit be married to his daughters (failed).

To catch Buster and Babs Bunny and eat them (failed).

Big Daddy Boo was a minor villain in the Warner Bros. cartoon movie Tiny Toon Adventures: How I Spend My Vacation. He is an obese alligator who wanted Buster Bunny that he ought to marry his three daughters against his will, to which Buster however had declined.

When Buster and Babs Bunny went to a house, Buster started talking about romance before he saw the three residents, three alligator women called Big Boo, Sissy Boo and Little Boo, who tied him to a chair. Buster tried to escape, only to run right into Big Daddy Boo, who was told by his daughters that Buster would court them. Buster replied that he wouldn't, to which Big Daddy agreed as now would be the time for the wedding. When he asked his daughters which of them hadn't been married for a while, they all started to fight about Buster until Big Daddy replied that they would all marry him. Buster told him that he couldn't as this was bigamy, only for Big Daddy to reply: "No, that's big ol' ME!". When the wedding was held at the garden, with Buster being grabbed by all gatoresses who were wearing wedding dresses, Big Daddy functioned as a priest (although he skipped many passages from the bible). Just they were about to marry, Babs, who dressed up as a businessman, interfered, claiming to be selling fireworks. The gatoresses cheered at this, but Big Daddy wasn't sure. However, Babs claimed to have been authorized and started to hand out fireworks to everyone and then asked the Gators to walk onto a bungalow and then grabbed Buster before fireworks started, sending the Boos into the sky.

Later, Buster and Babs were performing on a ship as singers, only to realize that their audience consisted of predators, including the Boos as well a possum family they've encountered earlier. Realizing that the predators wanted to eat them (although it's not known if the Boos also wanted to eat them or just marry Buster to the gatoresses again), they ran, only to be chased and cornered by the predators, including the Boos. At this moment, Byron started to fly down and save them just as the predators were about to strike. Big Daddy Boo, his daughters, and the rest of the audience followed them in boats and chased them across the land until the two were stopped by Mr. Hitcher. They climbed up on a tree where they encountered Banjo Possum, apparently the only friendly member of his family who offered his help. Together, they jumped off the tree and into a mine cart as Mr. Hitcher used his chainsaw to cut it down, with all the predators waiting beneath it. The falling tree knocked out the predators, but Mr. Hitcher followed Babs and Buster in another cart.

Big Daddy Boo was very enthusiastic about his daughters being married, completely ignoring the fact Buster didn't want to be his son-in-law, most notable when he dismissed Buster's complaint about being married to all of his daughters with his "Big ol' ME!"-pun. He was also more skeptical than his daughters when Babs handed them fireworks. He still fell for her trick, in the end, being sent into the sky along with his daughters when the fireworks exploded. When he was later revealed to be part of the audience at the ship, Big Daddy is seen with his maw watering and he was also one of the predators to exclaim: "Food!" when getting in their way, implying that he now wanted to eat Buster (as well as Babs) instead of having him as a son-in-law, possibly as revenge for being tricked by Buster and Babs. Like the rest of the audience, he's also extremely determined to catch them as he participates in a long chase after them. 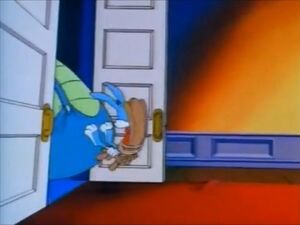 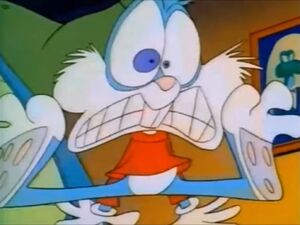 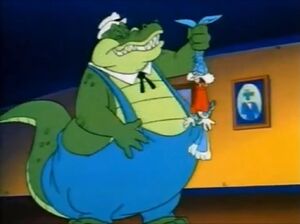 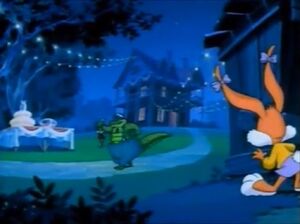 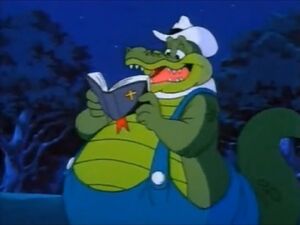 Big Daddy Boo as the priest during his daughters' wedding 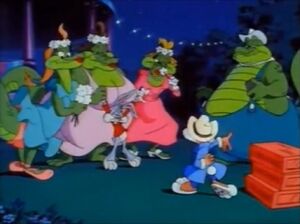 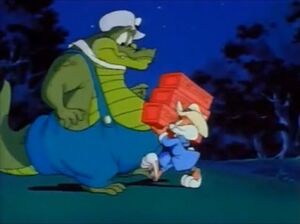 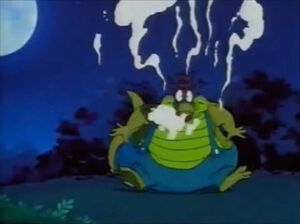 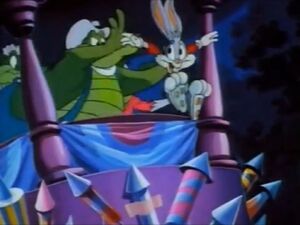 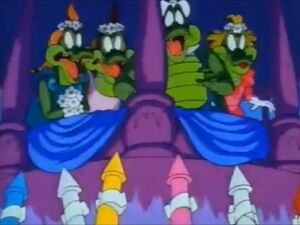 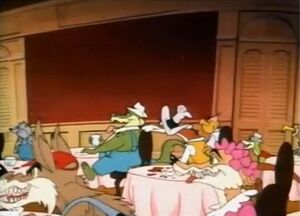 Big Daddy among the predators on the ship 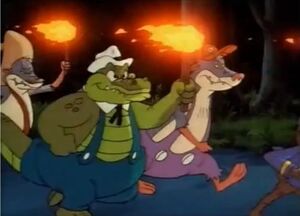