Leader of the Fish Legions

Ordering his Legions to do his Bidding.

Destroying planets.
Sucking the energy out of stars.

Be the absolute ruler of the Universe.

Annihilate the Galaxy of Ratboy Genius and Co.
Destroy all non-Fish in the entire galaxy (implied through his biggest attack name, the "Final Charge").

Big Fish Boss is the main antagonist of the entire Ratboy Genius YouTube cartoon show. He is an unrelenting dictator who wishes to become powerful enough to become the leader of the Galaxy, using the threat of absolute destruction.

He was voiced by Ryan Dorin, the composer and creator, however with a heavy filter added.

While all other Ratboy Genius characters have proven to be sympathetic - even the villains, with misguided motives and a way of redemption, the Big Fish Boss is a merciless and terrible warlord who only has one goal in mind: Complete control of the galaxy. He has absolutely no remorse for anyone else, and is perfectly willing to suck the energy out of stars (hereby killing entire solar systems) to further his own needs. To top that off, he also destroys random planets as a display of power.

He is a great speaker, as shown when he successfully manipulated the entire species of the noble Fish into becoming his mindless soldiers. He is referred to a being that only wishes to spread mayhem and destruction, and it is established that he is willing to sacrifice any and all of his soldiers, showing that he doesn't even have compassion for his own kind.

While the channel is known for its calm and quiet voice acting, Big Fish Boss constantly screams his dialogue, making sure the galaxy can hear his cry. His aggressive nature is a stark contrast to the rest of the cast.

While Big Fish Boss initially seemed to be a demonic, power-hungry creature appearing out of nowhere, it is in a later episode revealed by Ratboy Genius that a previous Fish Boss had attacked Mars, killing all life on the planet and creating what is now known as Valles Marineris. This implies that Big Fish Boss might come from an extremist family of the vague "Fish Boss" line, offering some explanation as to why he is so hellbent on accomplishing his goal.

While Big Fish Boss does not at all appear in the series, he is implicitly the unseen Bigger Bad; his Cosmic Thunderbolt attack, which would've destroyed Ratboy Genius and co., could only be averted in such a way that the creation of Little King John 's world was a consequence. Therefore, the world that Ratboy Genius explores only really exists because of the Big Fish Bos, something Ratboy Genius is not yet aware of.

The third episode of the series seems to focus on the notorious Fish Eater, who sings about his casual fish eating. The Fish panic and apprise Big Fish Boss about the Fish Eater, and Big Fish Boss becomes the real threat, as he reveals they have a plan to take over the Galaxy.

The furious leader orders his soldiers to tear Fish Eater apart. After this, the Big Fish Boss exclaims the Galaxy is for fish and leaves, not to be seen again for years.

Big Fish Boss is the unseen overarching antagonist of this series, as it focuses on Little King John unveiling the truth about his world, and being reluctantly recruited by Ratboy Genius to join in the final battle with Big Fish Boss, to ensure the survival of the galaxy, and that his world was even brought into being in the first place.

In the second episode of the series, Big Fish Boss makes a surprise return, now presented as the main antagonist of the Ratboy Genius universe. Without hesitation, he orders his Legions to destroy an entire planet by repeatedly crying "KILL THE PLANET!" The planet is reduced to dust, and Big Fish Boss, satisfied, stresses that the Galaxy is for Fish.

More of Big Fish Boss' cunning plan is revealed in the third episode. The Professor explains that Big Fish Boss, using his Legions, weaves cosmic webs between stars, sucking out their energy to charge up fatal electric bolts which he uses to destroy planets with ease. Eventually, he will have enough power to annihilate the whole of the Galaxy. Armed with this, he plans to become the Leader of everything.

Throughout the episodes, while the Big Fish Boss continues to be a distant force, more is revealed about him, such as his main form of attack, the Cosmic Thunderbolt, and that he manipulates the peaceful Fish into blindly following his orders, causing them to forget they are "noble and free".

He appears in the seventh episode, sporting a new 3D appearance, roaring triumphantly into the sky.

In the tenth episode, while Ratboy Genius is undercover in the Fish quarters, Big Fish Boss appears and holds a mad speech where he promises they will soon take over the Galaxy as his elusive master plan is brought into action. Disgusted, Ratboy Genius leaves along with Summer Solstice Baby.

In the Grand Opera of the series, as everyone readies their battle stations, Big Fish Boss can be seen holding what is assumed to be his last speech. With a content smile on his face, he claims his Master Plan is complete, and their demands will never be met; insinuating his Legions have no choice but to follow his lead and bestrew the Galaxy in death and chaos. The Fish Legions cheer him blindly, huddling together to form a Tesla coil. After asserting for the last time that the Galaxy is indeed for Fish (all the while growing to a terrible, twisted size and form), Big Fish Boss is caught unawares by the Galactic Superhero George who had been intensely studying about the Thunderbolt up until now and lands a devastating punch on the behemoth of a warlord. Crying out to the tune of the song, Big Fish Boss quivers in momentary fear and frustration.

In the thirteenth and fourteenth episodes (constituting the climax and the epilogue of the series), the final struggle breaks out, and George is seen fighting up, close and personal with the Big Fish Boss, while the latter's armies are vanquished by Ratboy Genius' troop (including Little King John) and the Fish Eaters. In the heat of the battle, Fred and Sue call for George to return to the ship, as he is their navigator, but he refuses to listen, returning only too late to the ship as it's crashing on the proximate Red Planet. Big Fish Boss, meanwhile, is finally caught in the titanic nets belonging to Old Fingerhead/Young Mouthbottom.

In the last shot of Starship Genius, it is revealed that Big Fish Boss tore off George's arms with his own needly teeth, and he rigidly stares out from the net, with the limbs protruding from his maw. 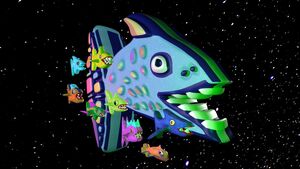 Big Fish Boss with his Legions. 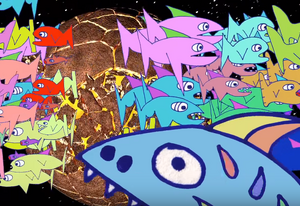 Big Fish Boss leaving a planet after destroying all life on it. 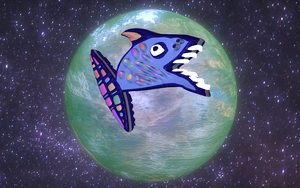 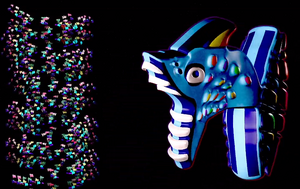 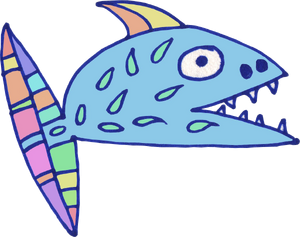 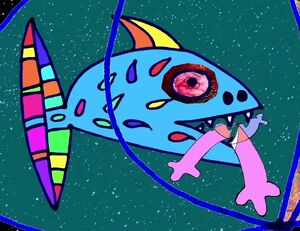 Big Fish Boss having bitten off George's arms.
Add a photo to this gallery

Retrieved from "https://villains.fandom.com/wiki/Big_Fish_Boss?oldid=4275275"
Community content is available under CC-BY-SA unless otherwise noted.