Is a professional mob boss.
Uses the Enforcers as his muscle (Frederick Foswell).
Marksmanship.
Adept at disguise.

Big Man is a supervillain in the Marvel Comics universe and is an enemy of Spider-Man. A couple of individuals have used the Big Man persona. The first and original Big Man was Frederick Foswell, the second was his daughter, Janice Foswell, the third was Hank Pym Jr. (MC2 Universe), and the fourth was Godwulf.

Frederick Foswell was a reporter for the Daily Bugle and secretly led a criminal life as the crime boss Big Man. He also employed the Enforcers as his muscle. He was eventually caught and had his crime spree put to a halt after having been defeated by Spider-Man, but after serving some time he seemingly reformed and got his job back at the Bugle.

During his second stint at the Bugle he assumed another secret identity, Patch, as an underworld informant. In this guise he secretly followed Peter Parker to see how he got exclusive photos of Spider-Man. He almost found out the secret identity of Spider-Man but was put off the trail when Spider-Man as Parker set up a Spider-Man dummy to swing away while Patch was watching. Although it seemed as if he had reformed, he secretly wanted to take over the criminal underworld from the Kingpin. He became the Kingpin's second lieutenant, but when J. Jonah Jameson's life was threatened he took a bullet and died saving Jameson's life.

More than a decade later, the Jackal brought him and numerous other Spider-Man villains back to life. Big Man later died from clone degeneration.

Janice Foswell is daughter of Fredrick Foswell and sought to follow in her father's footsteps to gain control of the New York underworld. She was soon joined by a new Crime Master and Sandman.

She and her Enforcers were defeated by Spider-Man, the Human Torch and the Sons of the Tiger. Over a dispute about eliminating Spider-Man and the Sons, Janice was killed by the Crime Master who turned out to be her fiancé and son of the original Crime-Master, Nick Lewis Jr. (both had separately pursued vengeance against Spider-Man without knowledge of each other's identity).

Other Versions of Big Man

Henry Pym Jr. is the son of Hank Pym and Janet van Dyne in the MC2 universe. He inherits his father's size changing powers and takes the Big Man name. He is briefly a member of the Revengers, before going straight and joining a government-sponsored team.

On Earth-7484, Big Man is the name of Godwulf's Redeemers. He was big and strong, but had eyes of a child that were quite open and warm.

In the Ultimate Marvel universe, Frederick Fosswell appears as an underboss for the Kingpin, working under the moniker of Mr. Big.

Big Man In Other Media

The Big Man codename is depicted as an alias in The Spectacular Spider-Man for a mysterious crime lord of a criminal empire from behind the scenes. Tombstone is the initial version until eventually being overthrown by Green Goblin as the new Big Man in crime.

A variation of Henry Pym Jr. appears in the animated direct-to-video film Next Avengers: Heroes of Tomorrow, voiced by Aidan Drummond.

Janice Foswell is alluded in Spider-Man: Shattered Dimensions. In the Noir universe, she is mentioned by a henchman to be Hammerhead's girlfriend. When Fancy Dan was flirting with her, Hammerhead had Crime Master kill and dump Fancy Dan in a garbage can. Snake Marston has also attempted to seduce her.

Big Man and the Enforcers

Frederick Foswell talking back against Kingpin 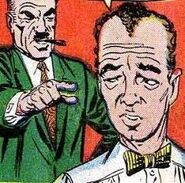 Frederick Foswell with his Patch mask 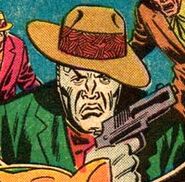 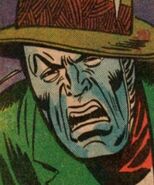 Godwulf uses the Big Man name
Add a photo to this gallery
Retrieved from "https://villains.fandom.com/wiki/Big_Man?oldid=3326937"
Community content is available under CC-BY-SA unless otherwise noted.