Kill off the entire population of Japan.

Leader
Big Shadow is the primary antagonist of Kikaider 01, the sequel to the Tokusatsu series Android Kikaider. He is the leader of a sinister criminal organization called SHADOW which seeks to kill off 1/10 of Japan's entire population so they can swoop in and take over.

At first, Big Shadow communicated to his underlings through audio, with his appearance unknown beyond a silhouette. However, after Jiro disguised himself as Hakaider he was able to discover Big Shadow's location and his true appearance.

He was voiced by Minoru Midorikawa from his initial appearance up until his true form was revealed in episode 20, after which he was portrayed by Nobuo Yana.

Big Shadow sent his second-in-command Shadow Knight to capture Akira, seeking to use the blueprints on his back to construct the Giant Devil robot and use it to take over the world. This draws him into conflict with not only Kikaider 01, but also the Hakaider Squad, who were also seeking to build Giant Devil and use it for their own ends. Big Shadow attempted to persuade Hakaider to join SHADOW, but Hakaider refused, not wanting to team up with anyone.

After the Hakaider Squad is defeated and Hakaider is seemingly destroyed, Big Shadow has him rebuilt and forces him to join SHADOW. After discovering that a second child, Akira's older brother Hiroshi, had the other half of the blueprints on his back, Big Shadow directed his forces to look for him as well. SHADOW was eventually able to capture Hiroshi and his caretaker Misao and copy the blueprints off Hiroshi's back. With no more need for either, Big Shadow ordered that they both be executed, but the two were saved by 01 and Kikaider.

With the blueprints off of Hiroshi's back, SHADOW was able to complete the body of Giant Devil, but they still needed Akira's blueprints to complete Giant Devil's core and put the finishing touches on the robot. After testing out Giant Devil's power by having wreak destruction on a city, Big Shadow sent his men out to capture Akira so they could complete Giant Devil. After Akira was captured, along with his caretaker Rieko, SHADOW obtained the other half of the blueprints and was able to complete the Giant Devil robot. However, 01 and Kikaider then showed up and saved the two before SHADOW could finish them off before storming the base to destroy Giant Devil. Big Shadow activated the Giant Devil and ordered it to destroy the two Kikaiders, but the heroic androids were able to combine their power and destroy the colossal robot.

With Giant Devil destroyed and the blueprints they had copied off Akira and Hiroshi's backs lost in the destruction of their base, Big Shadow began to seek out alternate means to exterminate Japan's population. He would also show his true form after Jiro and Hakaider discovered his location and promoted Hakaider to second-in-command alongside Shadow Knight. After the continued failures of both of them however, Big Shadow would have a new android named Zadam built in SHADOW's moon base and call him to Earth to serve as SHADOW's new second-in-command.

Zadam devised a plan to defeat Kikaider by building an android named Mari who had the power to transform into Bijinder and sending her to gain Ichiro's trust so she could lure him into a trap. To make Ichiro like Mari, Zadam programmed her to protect children from SHADOW's robots. Unbeknownst to Mari, Zadam and Big Shadow had implanted a miniature H-bomb inside her body that was set to detonate if the third button on her blouse was ever undone. After Mari gained Ichiro's trust, Big Shadow used the pain circuit he had installed in Mari to torture her so Ichiro would remove her blouse to tend to her wounds. However, before Ichiro could undo the third button, Mari got up and walked away to keep Ichiro from triggering the bomb.

As punishment for defying SHADOW, Big Shadow had Hakaider and Zadam beat her before sending her out to redeem herself by destroying Kikaider 01. However, Mari continued to feel conflicted about her mission to destroy Ichiro and later a partially-incomplete conscience circuit installed inside her by Ichiro. Upon learning of this, Big Shadow had his forces capture Bijinder and ordered the conscience circuit removed so she would return to being loyal to SHADOW, but Bijinder was able to break free and fight off SHADOW's forces before escaping.

Eventually, with 01's continued interference in their plans, Big Shadow hired the robot samurai mercenary Waruder and gave him the task of eliminating 01. As Waruder was scared of dogs, to the point where he would freeze up whenever he saw one, Big Shadow ordered Hakaider to kill any dogs in the area to ensure Waruder would be able to fight 01 without interruption. However, much to Big Shadow's frustration, Waruder's code of honor led him to object to some of SHADOW's more despicable schemes, such as those that involved harming children, and help 01 and Bijinder in thwarting them.

In the final episode, when Dr. Komyoji returned to Japan, Big Shadow had the professor kidnapped, hearing of the robot repairing device he had created and forced him to build another such device to repair SHADOW's androids. Komyoji complied after being beaten by Hakaider but, when their backs were turned, installed a bomb inside the device and rigged it to explode when the device repaired its 30th android. With the machine completed, Big Shadow was confidant there was nothing to stand in his way from creating a "SHADOW empire" and ordered Komyoji executed, having no more use for him. As Hakaider and the Shadowmen set up Komyoji to be executed by guillotine, 01, Kikaider and Bijinder showed up to rescue the professor. Big Shadow sent Hakaider, Zadam and a force of Shadowmen to defeat the three androids, believing himself unstoppable with the robot repairing machine, which revived every Shadowmen destroyed by the heroic androids. After the Zadam twins and Hakaider were destroyed by the combined powers of the three androids and absorbed by the robot repairing machine, the machine hit 30 and exploded, killing Big Shadow and destroying the SHADOW base. 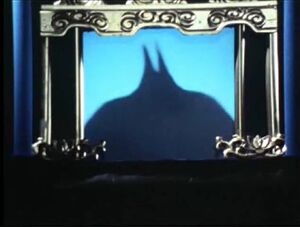 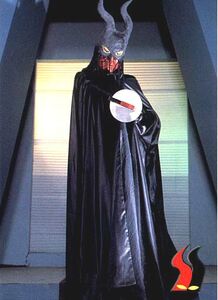 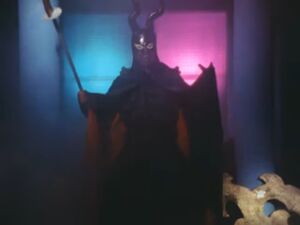