Betray the Grove Street Families along with Ryder.

He was a high-ranking member of the Grove Street Family gang, however him and a fellow member, Ryder were later revealed to be working with the Ballas and the C.R.A.S.H. Unit.

He was voiced by Clifton Powell, who also played Earl Latimore in Norbit.

Early in the storyline, there are several signs of disloyalty to the gang: he has moved out of Grove Street to live in a new home in Idlewood (Ballas territory), and there is suspicion that he paid for the house with drug money, despite his insistence that it was money from his aunt, and he refused to do a drive-by on the Ballas car who ambushed CJ, Sweet, Ryder and him while they were ordering in drive-thru (he said he wanted to enjoy in his food). Also, C.R.A.S.H was seen twice leaving his home in Idlewood, with Smoke saying that they will not let him go. The last thing is his deal with the Russians, which proves bad in downtown mall when they ambush him and Carl and they are forced to escape on a bike through a sewer.

The missions Smoke performs with CJ are generally tangential to the operations of the gang, despite Smoke's assertions to the contrary. He gets involved in conflicts with non-native gangs, including the Russian mob and the San Fierro Rifas.

In "The Introduction", Smoke tries to convince Sweet to allow the GSF to sell hard drugs, saying that the Ballas have gotten rich and powerful due to their drug sales, while the GSF have lost power because of being neutral. Sweet refuses on the grounds that he does not want to enrich himself and the others at the expense of his neighborhood and GSF members.

Meanwhile, Smoke easily convinces Ryder to his side during a private meeting. Their true nature is revealed in the game when CJ along with Caesar (Kendl's boyfriend) witnesses them meeting with the Ballas and C.R.A.S.H. in a garage with the green Sabre parked. The green Sabre was used in the assassination of Beverly Johnson. When CJ wants to know what Frank Tenpenny and Eddie Pulaski did to cause Smoke's betrayal, Eddie says, "Smoke? Smoke does exactly what he is told! He learned that lesson a long time ago!".

After CJ is exiled from Los Santos, Smoke also becomes the manager of OG Loc and opens an orphanage in Los Santos. Smoke cultivates an image as someone who made it out of the ghetto with hard work and wants to give back to his old neighborhood in the form of philanthropy. Ironically, he publicly pronounces his desire to "keep the street clean of drugs". The media reports this version of events and does not appear to question where his money has come from, so he can produce the drugs and sell them over the neighborhood without the media snooping around, and with C.R.A.S.H involved, he is protected from the Los Santos Police.

At the height of his power, Smoke lives in a large, heavily fortified crack den, referred to as a "crack fortress", deep in Ballas territory. He lives in luxury and has the full protection of the Ballas and Vagos, who have unrivaled control of the streets. However, as time progresses, Smoke becomes increasingly paranoid and stops leaving his home because he believes someone will try to take over his business. Meanwhile, due to influence of Ballas and Vagos, and loss of morale of the gang with no one to lead them without Carl and Sweet, the GSF surrenders and many Grove Street foot soldiers become addicted to crack and no longer care about fighting to defend their territory, retreating.

In the final mission of the game, Carl enters crack palace amid a citywide riot to confront for the first time since CJ left Los Santos. He finds Smoke wearing an armored vest, smoking crack, and playing video games. Even while staring down CJ's gun, Smoke refuses to admit wrongdoing and proclaims: "I made it, CJ, I'm a success, I can't be touched! I don't give a fuck, fuck the whole world". In a moment of pity, CJ asks, "What happened to you, man?" to which Smoke replies, "Man, what the fuck do you care?" The lights go out, and CJ kills his former friend in a gun battle. As he dies, CJ asks Smoke what made him flip up and he explains that he betrayed the gang because he finally saw an opportunity to become rich and famous, and took it without caring about the consequences; Smoke says that because of his greedy nature, he had no choice in the matter. With his dying breath, boasts, that everyone will remember his name, before passing. Despite his betrayal of the GSF, CJ still seemed to regret having to kill a life-long friend. When Tenpenny sets Smoke's palace on fire, leading to the building's destruction as it explodes, Big Smoke's corpse is set on fire while off-screen.

At first, Big Smoke appeared to be a good and loyal friend of CJ. Unlike Ryder and Sweet who constantly berate Carl for his misdeeds, Big Smoke seemed to be compassionate towards the protagonist, comforting him during the funerals. He was also known to be quite funny and, often, joking with CJ and the other gang members and was almost always in a good mood. However, beneath his exterior, Big Smoke is actually a power-hungry hypocrite.

With the prospect of power, money, and fame in the drug business too great for to resist, he establishes a drug delivery venture with the Loco Syndicate in San Fierro with the help of the Ballas and Vagos, and with the partnership with San Fierro Rifas. Smoke runs drug factories in both Los Santos and San Fierro.

Big Smoke became a treacherous, arrogant, ambitious, selfish, delusional, dangerous and greedy man that he believed Los Santos was his city and, once he died, all would gonna remember his name, although, in fact, he was just a pawn who was used by Tenpenny to take down gangs from Los Santos.

During a conversion in the mission "Nines and Ak's", Big Smoke assured that CJ was a visionary like him and to remember him when CJ himself gets to the top. This indicates that even back then Big Smoke had a strong belief that his deal with Tenpenny for a Crack Empire will never be permanent and had realized beforehand that CJ was the only one in the Grove Street who will become a successful man on his own right. Near his death, however, Big Smoke tells CJ that he was blinded by the money and power he could gain, saw the opportunity and "had to do it" before giving the last breath. However, in the same part of his final words, Smoke proclaims that "he doesn't give a shit", indicating that he doesn't feel remorse for his actions, however, this could be him referring to his death, or a bluff.

Big Smoke is an overweight African-American who provides some comic relief early in the game. He wears the GSF green outfit (even after his betrayal), blue trousers and light-grey baskets.

Big Smoke drives a Glendale, cyan colored with a white roof. The car appears to be very simple, while it has black-gray tiers and silver-white bumpers and white headlights.

The license of the car is named A2TMFK. Though it is still unknown what does the license stands for. Various theories have been made over the recent years about the topic, trying to debunk the meaning.

Most of the people suggest it stands for "a-two-timing motherf-cker", which is the reference of Big Smoke's betrayal of the Grove Street Families, and "a two-ton motherf-cker" which references to Big Smoke's weight.

Just like CJ, Big-Smoke is also notable for becoming a popular meme on the internet. Various users of YouTube started making parodies of Big Smoke, mainly with Big-Smoke's order and the mission in which CJ and Big-Smoke had to follow the train. 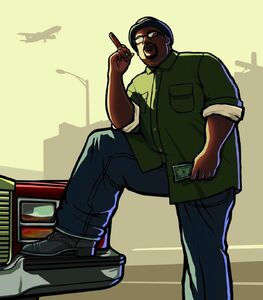 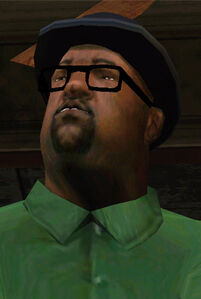 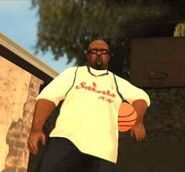 Big Smoke threatening CJ, due to Big Smoke thinking that CJ was Sweet.

Big Smoke with Frank Tenpenny, Ryder, Eddie Pulaski, and the green Sabre that was used to kill Carl Johnson's mom. 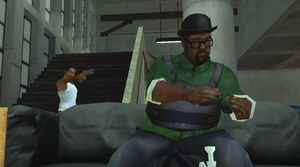 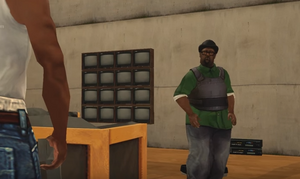 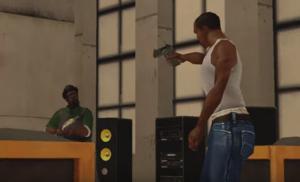 Big Smoke and CJ pointing guns at each other. 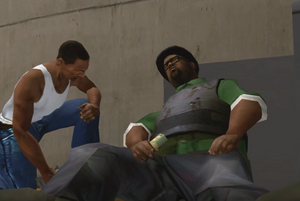 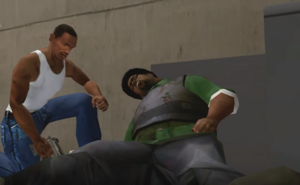 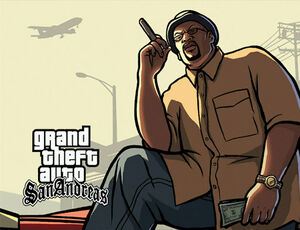 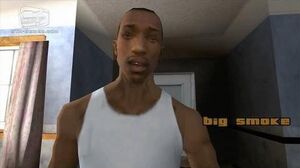 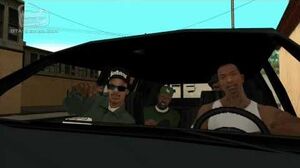 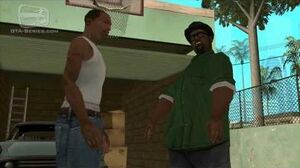 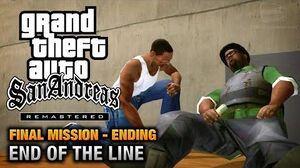