Getting into trouble with the law.

Get the big score that would settle him for life (failed).

Offer Armacost protection while both are in prison so he could be later rewarded (succeeded).
Kill Armacost as vengeance for him mutating (failed).
Get rid of the Major so he could control his men and control Gotham City (partially succeeded, then failed).
Kill Terry.
Kill Bruce Wayne.
Kill Batman (all failed).

Charlie "Big Time" Bigelow is the main antagonist in the Batman Beyond episodes "Big Time" and "Betrayal". He was a childhood friend of Terry McGinnis and referred to him as "Tiny Terry", due to his limited thinking and tendency to fail to see a big picture.

He was voiced by Stephen Baldwin and Clancy Brown, the second actor voicing Lex Luthor in the DCAU, Risotto Groupon in Rick and Morty, and Mr. Krabs in Spongebob Squarepants.

Charlie Bigelow was friends with Terry McGinnis ever since they were kids. It is implied that Charlie had known Dana Tran who expressed familiarity with him. after his release.

Charlie was a young delinquent who hoped that one day he get the big score and be set for life. At the time, both he and Terry were troublesome and got in trouble with the law. This devious behavior included petty thefts, vandalism, and shoplifting. Once Charlie was eighteen, he took Terry with him on a heist to prove himself and his gang. However, things didn't go as planned and Terry and Charlie got arrested. Terry wasn't severely punished due to being underage, but Charlie was put on trial as an adult and was sentenced three years in prison. There he shared a cell with Richard Armacost, a top executive at Agrichem. Charlie took advantage of this and forged an alliance with him and offered him protection. In exchange, he would be fully rewarded for his services.

Charlie is eventually released from jail and coerced his friend Terry to get him a job at Wayne-Powers. However, Terry confronts Charlie about his hidden intentions and failed to persuade Charlie to see reason in his actions. He leaves but is unknowingly being tracked by Terry (as Batman) after he placed a tracer on Charlie. When Charlie was doing his latest heist for the mercenary, Karros, he fought Batman and during the brawl, he was infected by a leaked Cerestone canister (which was an experimental hormone developed by Wayne-Powers that accelerated plant growth and was estimated to revolutionize farming industry). Charlie and Karros escaped, but Karros blamed him for the fiasco, and demanded a reimbursement of 40,000 credits. It got worse for Charlie as the effects from the Cerestone started setting in, as he was in deep pain and his body began to gradually change. During the night, Charlie turns into a mutated malformed brutish monster, which fits his moniker and nature, and then refers to himself by his street name Big Time.

Due to everything that happened to him, Big Time wants revenge and goes after Armacost (due to that he indirectly was responsible for Charlie's condition). He confronts Armacost and almost kills him but Batman intervenes and stops him. Despite Big Time's inhuman strength, he gets stunned by a gas grenade and knocked out by Batman. Big Time is then arrested by the GCPD and is held without bail.

Despite being imprisoned, Big Time escapes and has assistance from a crime lord known as the Major. However, Big Time gets fed up with being used as a pawn and schemes against the Major. In order to accomplish this task, Big Time decided he needed to bring some of his own friends. Big Time firstly selects Terry and tries to get him to join his Gang. Big Time fails in convincing Terry and in response goes berserk. Terry then takes this opportunity and escapes. Big Time later gets reprimanded by the Major and gives him an ultimatum to fix his mistake.

Big Time sees this as the perfect opportunity to enact his plan to get rid of the Major. He confronts Terry again and takes advantage of Terry's naivete. Big Time is unable to kill Terry and convinces him to get the Major taken to the GCPD without being implicated. After the major gets arrested, it is revealed that Big Time only wanted the Major to get arrested so he can have his men work for him. He also lied that he wanted a cure, as he doesn't want to be normal because his new look garnered him the respect he wanted. Big Time then tries to kill Terry when he refuses to join him, but Bruce comes in and saves Terry by ramming Big Time with his car. Big Time attacks Bruce, but Terry uses this distraction to put on his Batsuit and stops Big Time. Big Time tries to flee on a bridge but Batman (Terry) stuns him with a flash grenade. This prompts Big Time to lunge at him, with both of them falling over the bridge. Big Time tries to hold on Batman's leg for dear life, but he loses his grip and falls to his presumed death. Bruce offered sympathy, but Terry comes to accept that Charlie was a bad influence he had long outgrown. 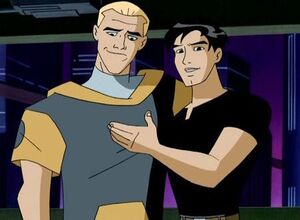 Charlie infected by the Cerestone.

Big Time falling to his death. 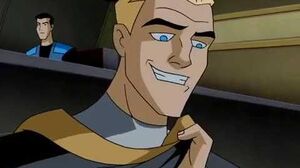 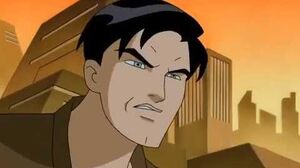 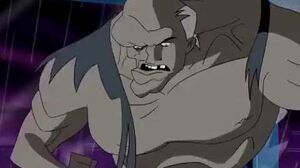 Batman Beyond vs Big Time 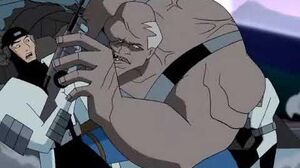 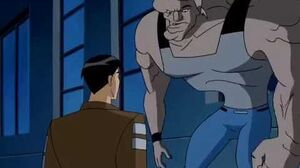 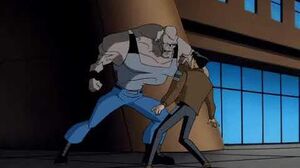