Big Toe is an antagonist in Courage the Cowardly Dog TV series. He is a huge mushroom formed in Eustace's foot.

The heel of the foot is the hardest, most determined and cruel of the other toes, and always puts pressure on anyone who irritates it.

However, his form prevents him from using his potential and his customs, and his plans are considered outrageous and he doesn't care. He also blackmails everyone he knows.

His only weakness is canine saliva.

In The Clutching Foot episode, Eustace has a huge foot fungus and itches to death. Courage and Muriel try to get him treated, but all their efforts are in vain, they then think about sending him to the doctor, but Eustace refuses and says that he just needs to sleep.

After a long sleep, the Big Toe came into action, his foot came into possession of Eustace's body and despite him trying to resist, Big Toe takes it all. When Courage enters the room and finds the Big Toe and Courage gets scared and makes a scream that all his teeth come out.

Courage gets behind Muriel's rocking chair to spy on him and as soon as Muriel enters he gets scared and asks Big Toe what he did with Eustage, but Big Toe sits on top of her and takes her hostage to make Courage do everyone the crimes he wants (not knowing how else to do it).

His first goal is to rob the bank in Elsewhere and send Courage in a van to get all the money in there. Unfortunately, Courage accidentally blows up the entire bank and crashes near Muriel again under Big Toe and then everyone slips away.

The second plan is about Courage having to stand still on the train tracks to stop a train so that Big Toe can rob all the passengers, Courage stands nervously on the rails eating a banana and throws the peel away and Muriel is still under the Big Toe agitated for her life. The train stops a millimeter from Courage and Big Toe and ready to rob him, but he slips on the banana peel and accidentally hits the train that ends who knows where, Big Toe furious for this blames Courage telling them that "dogs don't eat bananas".

During the night Big Toe still above Muriel plans to take over Florida and the smallest big toe asks where Florida is, Muriel is always disgusted by what she does.

Courage tired of Big Toe searches Computer for news about foot fungus, Computer tells Courage to bring the fungus so he can examine it. Courage with a fishing rod without Big Toe noticing it takes a mushroom and gives it to Computer who finds it disgusting, telling him that the only remedy is dog saliva, much to Courage's contempt.

Courage begins to lick Big Toe to his disgust by tickling them and slowly regenerates into Eustace who feels tired and Courage too, Muriel embraces Courage happy.

The big toe soon after tried to regain possession in the language of Courage.

The Big Toe, the finger band, returns in Ball of Revenge alongside Katz, Le Quack, The Queen of the Black Puddle, Cajun Fox and Weremole to take revenge on Courage after being called by Courage-tired Eustace. Despite the smaller little finger, he proposed to go up to the cellar to take Courage, but this was not necessary and they shut him up.

The plan is to kidnap Muriel so that Courage when he heard her screams would come down to rescue her to ambush him, and when Courage gets out, Big Toe rushes over him still angry at him for licking him.

Katz challenges Courage to a game of Dodgeball Ball before he dies where he must play alone against all the bad guys, during which Big Toe is used as a catapult to launch Cajun Fox pirogues on Courage and then Big Toe kicks a dozen bowling balls at him.

Eventually, Big Toe holds onto a spiked club to finish Courage, although he seems lost for Courage, he remembers he knows how to make mega screams and starts screaming very loud to make everything break, freeing Muriel and causing Big Toe to fall with the others. villains (except Le Quack who mysteriously disappeared after the intermission show) in a large torn hole in the floor below him. 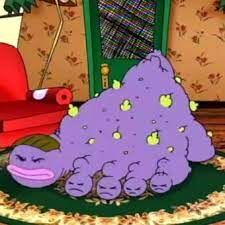 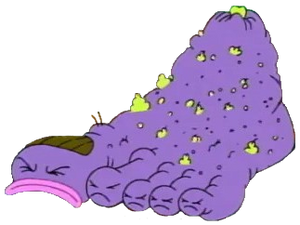