Bigfoot is the main antagonist of the 2006 horror film Abominable. Despite being based on the mythical simian-like beast known as Bigfoot, the movie completely changes the cryptid's personality, as the real Bigfoot is believed to be a peaceful being (unless provoked): instead, it seems to have the personality of the Yeti, a far more dangerous, bloodthirsty, and aggressive ape-creature from Himalayan myths.

It is likely that Bigfoot was chosen so as to allow the movie to be set in America, with the creators either deliberately making it more like the Yeti or simply deciding on a homicidal take on actual Bigfoot lore (much as horror movies do when making twisted takes on other folkloric characters like Santa Claus or the Tooth Fairy).

He was portrayed by Michael Deak, and his vocal sound effects were provided by Frank Welker.

Bigfoot introduces himself in the film by killing one of farmer Billy Hoss' horses, and killing their dog when he and his wife go out to investigate. He chases them into their house and leaves his footprints behind.

After Preston Rogers (who is wheelchair-bound) and his abusive nurse named Otis Wilhelm move into Preston's old cabin, Bigfoot then takes it upon himself to harass a group of girls who move into the cabin next door to Preston's, who are having a bachelorette party. The group consists of Amanda, Michelle, C.J., Tracey, and Karen (who is the one getting married). The following night, Bigfoot rips a tree in half and uses it to destroy the phone lines. He kidnaps Karen when she goes out into the woods and takes her to his cave where he mauls her. Preston suspects something suspicious once she goes missing and he sees the creature in the trees - he later emails the police, who unfortunately think that it is just a prank once they check his email.

When Hoss, Buddy, and Ziegler Dane go hunting for Bigfoot, Ziegler finds a badly injured Karen in his cave. Bigfoot arrives, killing Karen, and later Hoss, Ziegler, and Buddy. He goes back to the two cabins and kills Tracey, by pulling her out of the bathroom window, snapping her back. Only Preston witnesses this and tries to warn Otis. However, Otis does not believe him and tries to sedate Preston, but Preston manages to sedate Otis. The creature then shows his face up close to Preston's window, causing him to pass out. When he wakes up, Bigfoot kills Michelle and C.J., but Amanda escapes into Preston's cabin.

Amanda tries to email the police, but Bigfoot destroys their satellite, causing the entire power to go out. They manage to escape the cabin, but not before Otis gets himself killed by the creature for saving Amanda from getting killed herself. Amanda tries to drive away with Preston, but Bigfoot grabs hold of the car from behind as it is running, and let's go, causing it to hit a tree and Amanda to be thrown out the car window, knocking her out. Bigfoot tries to kill an unconscious Amanda, but Preston blasts his car horn, disturbing the creature long enough to press against the accelerator, putting it in reverse, and causing it to ram Bigfoot into a tree. Bigfoot is then impaled on the ax that Otis hit him with, which was still stuck in his back.

Appearing dead, Amanda recovers and takes Preston away from the area. The police arrive and Preston and Amanda are taken to a hospital. They go to investigate the scene, but all of the bodies, including the one of Bigfoot, are gone forever. They soon see an entire group of Bigfoot's species staring at them through the trees. The film ends there, implying that the monster skilled the cops. It is unknown what happened to the Bigfoot that had been impaled. Perhaps he survived or his body was taken away by the other members of his species.

Bigfoot displayed the same superhuman strength and size of his folkloric counterpart but also had a carnivorous appetite and an extremely vicious, predatory, and treacherous personality verging on malevolence: openly killing and even torturing sentient beings and being completely unreasonable in regards to such things. The monster seemingly exists purely to murder, devour, and destroy anything in its path.

Despite Bigfoot being part of a whole species, it seems to be a solitary predator, which given how destructive, uncaring, and cruel he was in regards to others may well be part of the species' survival: much as many real-world predators hunt alone (or perhaps Bigfoot was a "rogue", it is never fully explained either way in-universe). It is possible that more than one Bigfoot was at large during the whole film, given it was able to kill Ziegler, Hoss, and Buddy all at once while appearing in different places. It is also possible that the species attacking consisted of an entire offspring, given eyewitnesses have claimed it was over 12 feet, while the Bigfoot seen in the film is clearly only 7 feet.

The creature seems to display a high amount of intelligence considering it managed to destroy the phone lines and get to the satellite to remove and/or destroy it, so Preston and Amanda couldn't email the police for help.

Unlike most ape cryptids reputed to exist in reality, Bigfoot (in this movie) was able to extend his jaws considerably and had an amazing biting pressure: capable of biting a human's head clean off: it also had extremely sharp fangs, in-keeping with being a violent and carnivorous hunter.

While real-world Bigfoot is believed to be timid and apprehensive, as he often flees from humans, this version outright seeks human prey and will invade homes, destroying barriers and brutally dismembering anyone that dares try and fight back: only sudden noise (such as a car alarm) is shown to disturb it, even then only for a short while. 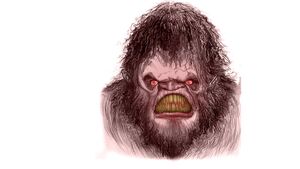 An official drawing of Bigfoot during the making of the movie. 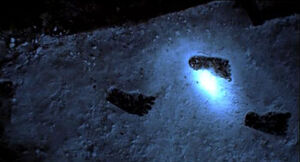 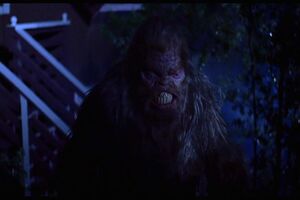 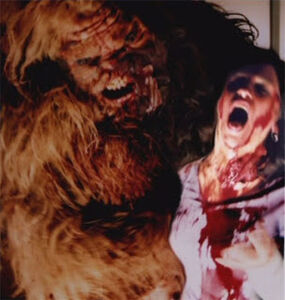 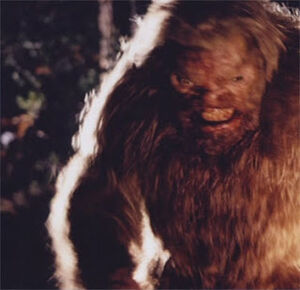 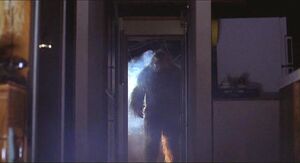 Bigfoot breaks into the house. 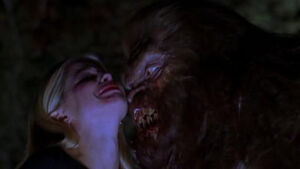 Bigfoot grinning evilly as he attempts to kill Amanda. 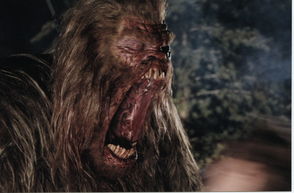 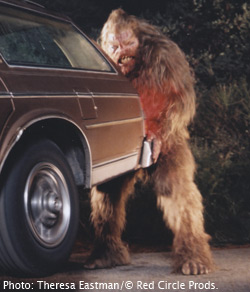 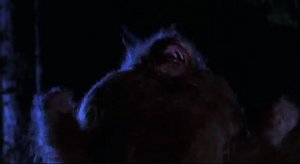 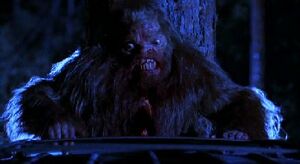 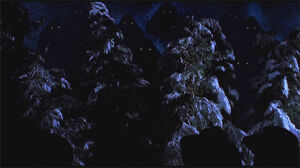 Bigfoot's family.
Add a photo to this gallery

Retrieved from "https://villains.fandom.com/wiki/Bigfoot_(Abominable)?oldid=3928797"
Community content is available under CC-BY-SA unless otherwise noted.