Keep the stones to himself

Make sure the Earth is respected using the stones (both failed)

He was voiced by Jason Hightower.

When it comes to character, The Biker in Black is similar to the Kid, except with a much more negative connotation. He is a fan of comic books and superheroes and uses his resources to try to create something impressive. He is also very ruthless and willing to take out anyone who gets in his way. Aside from that, he is an immature manchild. He is also xenophobic, as he purposefully kept the stones from the aliens knowing they weren't evil just for his own good. He also has a clear inferiority complex, as he was insecure when he was discussing his motives to have the Earth be respected.

The Biker in Black doesn't have many major appearances until the end of the sixth episode, as he was watching the heroes to test the abilities of the stones. When he is satisfied with the results, he reveals himself as a government official and retrieves the stones, intending to use them for the Earth Force Enforcement Force.

Upon retrieving the stones, he has the town under lockdown and orders a cover-up. He then spies on the main heroes, referring to them as "test subjects", before capturing Tuna Sandwich, who intended to interfere. After that, he orders a search for the Kid before interrogating Stuck Chuck about the invasion. Later in the day, interrogates Papa G about the Kid's whereabouts and other things, only to be fooled by Tuna making an impression of a higher authority figure, driving the Biker away. Before leaving, he says he's found the heroes before entering the trailer and realizing he's been fooled. He has the stones cleaned off and inserted into the suits of the Earth Force Enforcement Force.

The Biker in Black calls in the Force, and explains the situation that there will an alien invasion, and orders them to "defend" the Earth. They then are sent to the battleground, and the battle ensues as he watches from a distance. When the battle doesn't go as expected, he is overwhelmed and perplexed. However, the battle soon returns to his favor, and the aliens are cornered. However, before the Force could fully beat the aliens, the Local Heroes interfere, to the anger of the Biker, who orders that they are "taken out". The heroes fake their death using a reprogramed Dog, and are brought to the Biker. The Kid then tries to convince the Biker in Black that the aliens aren't evil, to which the Biker acts surprised, before revealing that he knew the aliens were never evil and tells the heroes his intentions. He then explains that he feels that the Earth is an underdog compared to other planets and species, and that he intends to make the Earth more respectable by using the stones. He then sends away the Local Heroes, and the alien that needed the stones are imprisoned.

However, before everything seemed 100% hopeless, Chuck intervenes, giving Kid the chance to retrieve his stone, and free the aliens. Outraged, the Biker in Black attempts to run over the heroes and aliens, but is stopped last second by the Kid, who sends everyone mid-air. Defeated, and somewhat impressed, the Biker in Black attempts to recruit the Kid into the Earth Force Enforcement Force. This attempt fails and the Kid gives the Biker a lecture, and then retrieves the stones to give them back to their rightful owners, to the Biker's anger. After everyone is returned to the ground, the stones are returned, and the Kid gives the Biker a chance to reform. The Biker rejects the offer, to Kid's annoyance.

A replica Biker in Black appears in the fantasy realm. He first appears building a giant robot. The next day, he reveals himself in his mecha and confronts the heroes, engaging in a battle before being defeated and presumably killed in a giant explosion.

The Biker in Black attempting to run down the heroes 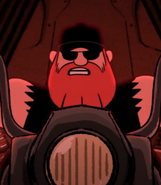