Life life to the Fullest.

Bill Clinton is a semi-recurring antagonist in Family Guy. He is a parody of the forty-second president of The United States of America, being portrayed as a thrill-seeking man who occasionally goes out in the nude. He is villainous for multiple counts of adultery and nearly destroying Peter and Lois Griffin's marriage in his main villainous role, "Bill & Peter's Excellent Adventure".

In "Bill & Peter's Excellent Adventure", Bill Clinton was in his limo, going through Quahog and having a fat girl party. However, because of the fat girls' weight, the limo broke down in the middle of the road, right in front of The Griffin House. One of Bill Clinton's secret service agents came to the house and asked Peter Griffin for a jack. Peter, having a newfound obsession for exercising, decided to make himself the jack and lift the limo himself, which led to him throwing his back out, painfully and getting himself sent to the hospital.

Bill Clinton visited Peter in the hospital and told him that he felt bad about how he threw his back out. Peter admitted that he was just getting old but Bill disagreed, having a philosophy in life, saying that age was just a state of mind and that he didn't need to let his age get him down. Bill Clinton showed off his skills and played the saxophone. Meg Griffin fell in love with him and took her clothes off, saying that he could take her, but Bill Clinton turned her down due to finding her unattractive.

To help teach Peter that age was just a state of mind, Bill Clinton took him on a bunch of adventures, where they could act like they were young and in college again. They went to fun places like Chuck E Cheese and partied the night away, like it was nobody's business. Later, they went back to Peter's house and make some prank calls. Bill made a rather unpleasant and unfunny prank call to Linda Tripp, screaming and cussing at her for revealing his affair with Monica Lewinsky and even wished death on her. This kind of killed the buzz for Peter but Bill brought the party train back on track by offering him some weed to smoke.

Bill and Peter got high as kites and went out for a midnight joyride in the limo. There, they passed by some pigs in a farmyard and Bill had the sudden urge to eat one of them. Peter was puzzled at his partner's preposterous proposition but Bill persistently pushed his pal to poach the pig. Bill and Peter snuck into the farm and ran around in the mud, chasing the pig. One they caught it, the farmer came out of his house, mad as hell. Bill and Peter quickly boarded the limo and escaped with the pig.

The following morning, Peter woke up face flat in his kitchen and everything was a complete mess. He had no recollection of what happened the night before but Lois remembered just about everything. She was very mad at Peter for acting like such a destructive moron and getting in trouble with the farmer and decided that Bill Clinton was a horrible influence on him. Lois went down to Bill's apartment to complain and before long, she found herself lying next to him in bed, having been convinced to have sex with him.

Lois was wowed and later guilt-ridden and didn't know what came over her but the deed was done and she had to live with the fact that she just cheated on her husband with Bill Clinton. Peter came into the apartment and saw exactly what happened. He was angry at Bill Clinton and told him that he no longer wanted to be friends with him anymore.

Peter and Lois' marriage was on the rocks and Lois told Peter that she was very sorry about cheating on him and said that she would allow him to even things out by cheating on her. Peter chose to have his affair with Babs and Lois' mother was surprisingly on board with this. However, Peter later backed out of this before having sex with Babs, not feeling right about cheating on Lois even if it was as an act of revenge. Peter offered to forgive Lois and they put the whole horrible ugly mess behind them.

Peter decided that since his marriage with Lois was now restored, he should go tell Bill that he's forgiven him too but as soon as Peter went to his apartment, he somehow managed to wind up in bed with him too, technically evening things out and proving Bill Clinton to be a depraved bisexual maniac who consistently cheats on his wife and demonstrates everything wrong with having a friend like him. 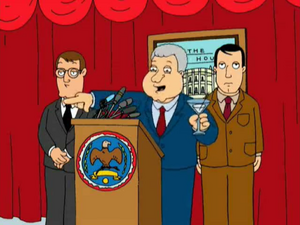 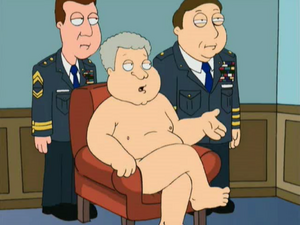 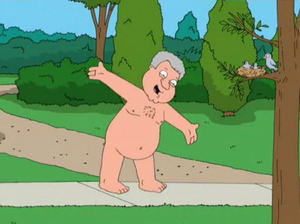 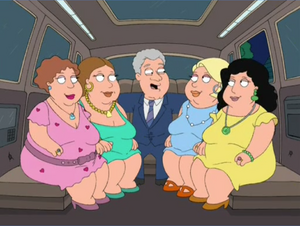 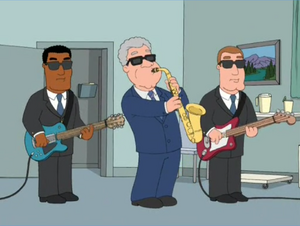 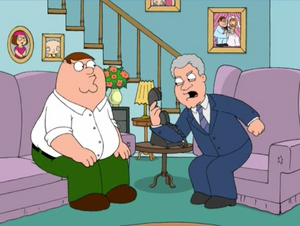 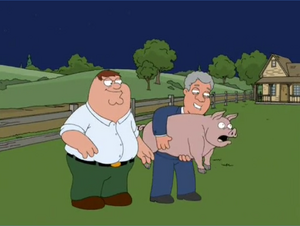 Bill Clinton kidnapping a pig with the intent of killing it. 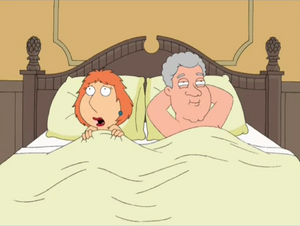 Bill Clinton having an affair with Lois Griffin. 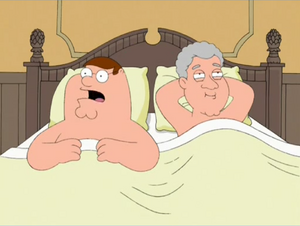 Bill Clinton having an affair with Peter Griffin. 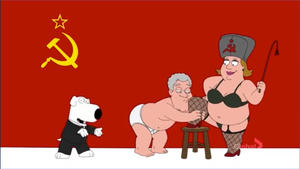 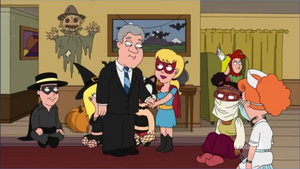 Bill Clinton having an affair with a teenage girl.