William "Bill" Henry Cosby, Jr. is a semi-recurring villain from the FOX animated series, Family Guy. He is a depiction of the once honored, but now reviled, stand-up comedian and serial rapist of the same name. He appears in several scenes and gags, many of which mock him for being a date-rapist, who drugs the drinks of underage women and then takes advantage of them.

In some of his appearances, Bill Cosby is voiced by Kevin Michael Richardson, while in others, he's voiced by Seth MacFarlane.

In "Peter, Peter, Caviar Eater", a cutaway gag featured Bill Cosby playing his character of Cliff Huxtable on The Cosby Show, making silly faces into the camera, while Theo comes to him with a very serious problem about how he got a girl pregnant.

In "Brian Does Hollywood", Stewie appeared on Kids Say the Darndest Things, planning to use his hypnotic glasses to control the minds of the entire American viewing audience. When he got onto the show, Bill Cosby sat there and told a bunch of stupid jokes. Stewie got sick of listening to all of Bill's dumb questions and annoying noises, so he skipped right ahead to the mind control, only for Bill to snatch the glasses away from him and try them on himself. Cosby played around with the glasses and pretended he was going skiing and the audience cracked up. Stewie tried to get the glasses back but they started to go to commercial and Stewie missed his chance. Bill grabbed Stewie and used his own glasses against him to hypnotize him into saying that he likes jump rope, sitting there and enjoying it, claiming to like Ghost Dad, and eventually, going to sleep.

In "Hell Comes to Quahog", Quahog 5 News featured the cast of The Electric Company, which included a young Bill Cosby.

In "The Man With Two Brians", New Brian showed The Griffin Family a video of Bill Cosby beating up a little person.

In "We Love You, Conrad!", Lauren Conrad makes a sex tape with Bill Cosby.

In "Peter's Sister", everybody celebrates Thanksgiving by watching a rerun of The Cosby Show, which has been updated in light of Bill Cosby's rape allegations. We see the theme song of the show, where Bull Cosby dances around with his female costars and guest stars lying around unconscious. Peter watches this and admits that he didn't notice Bill Cosby's raping going on back in the 80's. This Bill Cosby's first reference in the series, since the allegations about him came out.

In "Run, Chris, Run", Cleveland and Jerome take a tour of The Black History Museum and notice that the picture of Bill Cosby has recently been removed.

In "Carter and Tricia", Carter has Peter spike Tricia's drink with a liquid that's to make her "triple" herself (vomit, defecate, and have an orgasm all at once). When Peter asks why such a thing even exists, Carter replies, "Cosby". 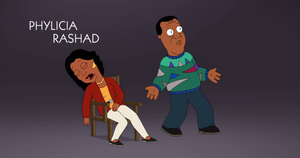 Bill Cosby dancing by the body of a woman he drugged and rapes. 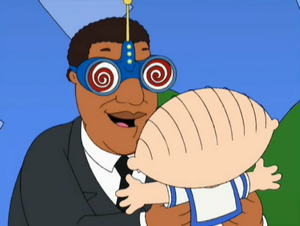 "You're gunna sit there and enjoy it." 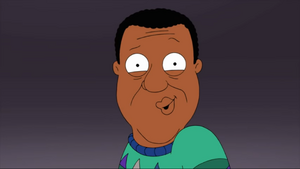