President of Catholic League's US branch

File a lawsuit against South Park (both failed).

Bill Donohue is a character from South Park, who serves as the main antagonist of the South Park episode "Fantastic Easter Special". He is based on the current real-life president of Catholic League's US branch of the same name.

He was voiced by Trey Parker who also voices other characters in the series, including Eric Cartman and some of the other real-life figures as well as Kim Jong-il in Team America: World Police.

As the Marsh family colors eggs for Easter, Stan Marsh questions what it has to do with Jesus. Dissatisfied by his father Randy's vague response, Stan storms off and makes the same inquiry to a mall Easter Bunny. The mall bunny tells Stan that it is "just Easter", and to "just go with it", then makes a mysterious phone call.

Stan soon finds himself being chased by men in bunny suits. When he gets home, he finds that his father is part of the plot. Randy calls the men off, and tells Stan that he is in a society called "The Hare Club for Men", who have guarded the secret of Easter for generations. Randy takes Stan to the headquarters of the Hare Club, where he is to be initiated into the group, which reveres a rabbit named Snowball. Just as he is about to learn the secret of Easter, Stan's initiation is interrupted as the club is ambushed by a cunning group of treacherous ninjas. The Hare Club members rush to protect Snowball, and Randy gives the rabbit to Stan, telling him to run. He escapes with Snowball, and witnesses the ninjas and their leader, William Anthony Donohue, executing a resisting hares and interrogating Randy. Stan runs off to his best friend Kyle's house and tries to extract any knowledge Kyle has on Easter. However Kyle is Jewish and doesn't know anything about Easter and is busy finger painting, and does not want to be involved in something so dangerous and harmful, but Stan persuades him to help.

Stan and Kyle manage to track down a man named Professor Teabag (spoof of Professor Teabing from The Da Vinci Code), who supposedly knows the secret of the Hare Club. Teabag lets them in his mansion and explains that Leonardo da Vinci was actually a member of the Hare Club and that Saint Peter was not a man, but a rabbit (Peter Rabbit), and that laser imaging shows that da Vinci originally portrayed Saint Peter as a rabbit instead of as a man in his painting of the Last Supper. Teabag explains that Jesus knew that none of the humans could speak for all Christianity without any acts of corruption, and that rabbits were pure, tolerant, incorruptible, and virtuous. This is why the Pope's mitre is shaped to accommodate a rabbit's ears. He also explained that the Catholic Church decided to bury the secret and put a man in charge, ever since, "The Hare Club for Men" society members have decorated eggs for generations to keep the secret in da Vinci's painting alive. He further explains that Snowball is actually a direct descendant from St. Peter, and that Stan's father and the members of the Hare Club have been kidnapped by the Vatican, who wish to cover up this secret, thinking of it as blasphemy. Then, Donahue's ninja minions attack again and kill Teabag's butler, but Teabag helps the two boys escape by putting marshmallow Peeps in the microwave; which causes a destructive explosion that destroys the mansion and kills both Teabag and the ninjas. Stan and Kyle go to the Vatican where Stan turns the rabbit over to the Catholic Church, on the condition that the Hare Club members are all set free and that Snowball remains unharmed. However, Donahue reveals he had actually made the promise on two separate crucifixes, a "double cross", and plans to make an example of the Hare Club. Benedict opposes this, saying that double-crossing is not considered to be "very Christian", something which Donohue responds by saying that it is what Christ would've wanted.

Fortunately, Jesus miraculously arrives to intervene after resurrecting from his death in Iraq, answering the prayer of one of the Hare Club members, and tells them that he did, in fact, plan for the popes to be rabbits, citing the current corruption of man. Pope Benedict XVI and his clergy are willing to listen and agree with Jesus, but Donohue refuses to listen and orders Benedict to execute Jesus for "going against the Church". Outraged to see how arrogant and pompous Donohue is, Benedict angrily refuses, saying that killing Jesus is not "very Christian". Donohue, angered by this, seizes the Pope's mitre, and orders his ninjas to capture all of them, including Benedict and Jesus, and declares himself the new Pope. With the clergy unable to stop him, Donohue orders his minions to lock up Kyle and Jesus, whom he calls the "two Jews", and Benedict to deal with later, then he leads Stan and Randy and the surviving Hare Club members to the block where the gigantic pot for Snowball's execution is.

At the cell, Benedict apologizes to Jesus for his actions, pleading for forgiveness. Jesus tells Kyle that his "superpowers" only work when he is deceased, and the only way to escape is for Kyle to kill him, so he can return to life outside the cell. Kyle is naturally reluctant and suspicious to kill Jesus, but eventually agrees, saying that "Eric Cartman can never know about this", and does so. As Pope Donohue is about to execute Snowball in front of Stan, Randy and the Hare Club members, Jesus appears in the crowd after resurrecting, and kills Donohue. Everyone cheers for Jesus and Snowball is elected Pope. Because he is a rabbit, Snowball cannot speak or tell people how they should lead their lives, just as "Jesus intended". Stan reveals that he has learned his lesson through all of his adventures: do not ask questions; just dye the eggs and keep his mouth shut, and Randy is extremely proud and enthusiastic of him.

Despite his death in his first appearance, Donohue can be spotted alive and well among the celebrities suing South Park in the episode "201". 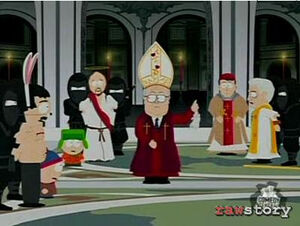 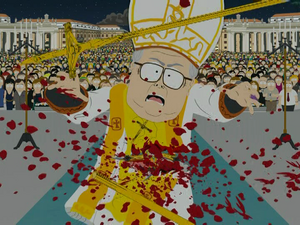 Bill Donohue's death.
Add a photo to this gallery

Retrieved from "https://villains.fandom.com/wiki/Bill_Donohue_(South_Park)?oldid=4110298"
Community content is available under CC-BY-SA unless otherwise noted.