“Feeding“ victims to the demonic Mangler.

Conspiring with other powerful local citizens of Riker's Valley.
Terrorizing and frightening his employees.

Increase his power and wealth via human sacrifices to the Mangler.

Sacrifice his niece to a demonic entity.

William “Bill“ Gartley is the main villain of Tobe Hooper’s 1995 horror film The Mangler based on Stephen King’s short-story of the same name which is part of the 1978 short-story-collection Night Shift.

The film stars Robert Englund, who played horror-movie-icon Freddy Krueger, as sinister Gartley and as his heroic opponent Ted Levine, who played Buffalo Bill in The Silence of the Lambs.

Bill Gartley is the malevolent owner of the "Blue Ribbon Laundry Factory" within the seemingly idyllic New England town of Riker's Valley in Maine which he rules with an iron fist and cruel discipline.

Day after day, his female employees have to struggle in the gloomy hall, watched by Gartley, who hobbles up and down with his horrible medical leg-braces on an iron bridge above them and constantly urges them to work faster.

When his niece Sherry, who also works in the laundry, accidently hurts herself and a few drops of her blood get inside the huge ‘Mangler’, the speed ironer machine seems to go crazy and shortly after Mrs. Frawley, the foreman is crushed dead by the huge plating-rollers.

Very much to Gartley’s annoyance, persistent detective John Hunton investigates the alleged accident and starts to put his nose in matters that are none of his business - for example, years ago Gartley's own daughter died in a nearly identical incident and the gruesome laundry-owner himself was badly wounded. But still he vehemently refuses to exchange the old machine for a more powerful and much safer model.

Gartley, using his wealth and influence in the Riker's Valley city council, manages that Hunten gets suspended from his duties. But he does some research on his own and discovers that the monstrous machine is in fact, possessed by some kind of evil spirit or demon.

Once Bill Gartley made a pact with the entity and sacrificed his daughter's life in exchange for wealth and power, as did the other town-community-leaders, such as the local judge and the reverend. They all have sacrificed their sixteen year-old virgin daughters. To seal the deal each one of them also had to slice-off one of their fingers. While Hunton and his good friend Mark, an enthusiastic researcher of the occult, prepare an exorcism to banish the blood-hungry creature, Gartley plans to sacrify his innocent sixteen years old niece Sherry to the devilish ‘Mangler’ to renew his pact and amass even more power and wealth.

During the final confrontation in the huge laundry-hall, Gartley tries to push Hunton between the ‘Mangler’s’ massive ironing-rollers, but in the end he himself becomes a victim of the monstrous machine. At the folding-station, he is mercilessly squeezed to death.

Bill Gartley is an old man, heavily ravaged by malice and ferocity, with thin, white, back-combed hair. His left eye is blind, which he more or less hides behind a smoked eyeglass. There is a tracheostomy-tube implanted to his throat from which a big scar runs up to his neck. He also is reliant to crutches and chromed medical leg-braces are attached to his legs.

His frightening and bizarre look is even more accentuated by his dark pinstriped-suit and his blood-red ascot-tie. He always keeps his hands covered by black leather gloves. 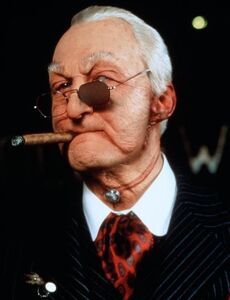 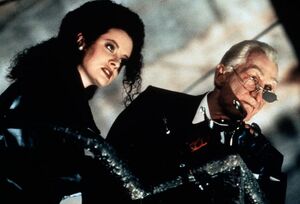 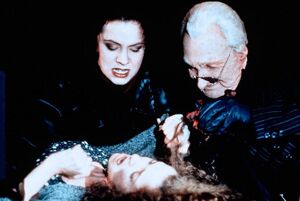 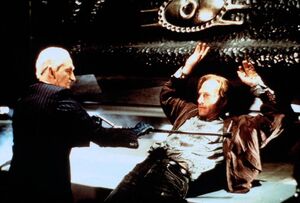 Bill Gartley trying to push Hunton (played by Ted Levine) between the ironing-rollers. 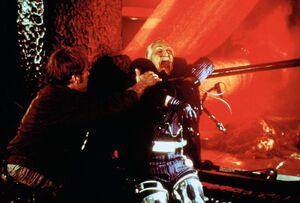 Bill Gartley becoming a victim of the 'Mangler' himself. 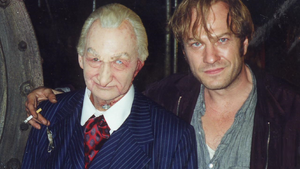 Behind the Scenes: Englund & Levine during a break.
Add a photo to this gallery

Retrieved from "https://villains.fandom.com/wiki/Bill_Gartley?oldid=3974357"
Community content is available under CC-BY-SA unless otherwise noted.