Swindle as many people as he can (succeeded).

Get away with murder (failed).

Bill Hodges is the main antagonist of the Criminal Minds episode "Parasite". He is a con artist who begins killing his victims as he gets closer to getting caught.

He was portrayed by Victor Webster.

Hodges is a career con artist who preys on wealthy people, pretending to be a financial manager and promising them huge returns on their money, which he then steals and disappears. He has multiple identities and pulls cons all over the country, but his one source of stability is his family, his wife, Rebecca, and young son, J.D., with whom he lives in Fort Lauderdale, Florida. Neither of them are aware of his crimes, and he leads them to believe that they move frequently because of his job as a real estate agent; in reality, he moves them so he can stay one step ahead of the police.

He also cheats on Rebecca as part of his con, seducing his female clients so they will be too emotionally involved with him to suspect what he is doing. One of his lovers, Brooke Sanchez, believes his name is "Hunter Portland", and that he wants her to leave her husband and marry him "when the time is right".

The strain of maintaining so many identities and keeping his family in the dark begins to tell as Hodges starts making mistakes. He became so sloppy in his work that his latest victim, Carla Marshall, finds out that he is stealing from her, not investing her money as he claimed. When she confronts him, he flies into a rage and strangles her to death. After Carla's murder, FBI Agent Russell Goldman, who has been investigating Hodges' crimes for five years, alerts the Bureau's Behavioral Analysis Unit (BAU), to help him profile and capture Hodges.

Hodges, posing as "Henry Moffett", a real estate speculator, cons Lorraine Horton, another wealthy, married woman, out of millions of her husband's money, believing that he will make her independently wealthy so she can leave her husband and be with "Henry".

Hodges becomes increasingly erratic as he is haunted, albeit not remorseful, for killing Carla, and his already suffering con artistry goes into an even greater decline; while trying to swindle another client out of his fortune, Hodges carelessly asks him to sign the check to one of his previous identities, immediately arousing the man's suspicion. Hodges panics and beats the man to death with a champagne bottle.

Hodges returns home, having told Rebecca and J.D. that he was away on business. He tells Rebecca that they have to move to Boston because the real estate market in Florida is terrible; he really just needs to hide from the increased police and FBI presence he feels at his back. Later that day, he meets with Brooke, who tells him she is pregnant with his child. At that moment, he gets incoming calls from Rebecca and Lorraine, the former asking him to pick up J.D. and the latter telling him she is taking back her money.

Hodges excuses himself from Brooke, promising to work things out later. He then meets with Lorraine, sweet-talks her into signing over more money, and knocks her unconscious and puts her in the trunk of his car as he goes to pick up J.D. He then tells J.D. they have a flat tire and puts on a DVD to distract the boy while he beats Lorraine to death with a tire iron and dumps the body.

The next day, Rebecca follows Hodges as he goes to visit Brooke, and confronts her after he leaves. When Brooke says that she did not know he had a family or even his real name, both women realize that Hodges has been living two separate lives. Meanwhile, Hodges, sensing that the police are perilously close, picks up J.D. at school and takes him home, intent on taking them with him to Boston, only to find Rebecca and Brooke in his living room, demanding answers.

As Hodges fumbles for an explanation, the BAU, with Goldman in tow, suddenly appear on his lawn to arrest him. Knowing he has finally been caught, Hodges briefly considers taking J.D. as a hostage, but ultimately lets him go to Rebecca in an uncharacteristic show of humanity. He then commits suicide by cop by reaching into his pocket as if he has a gun, forcing Goldman to shoot him dead.

BAU Agents David Rossi, Emily Prentiss, Derek Morgan, and Spencer Reid profile Hodges as a psychopath with the "dark triad" of personality traits: narcissism, Machiavellianism, and aberrant self-promotion. They theorize that he is incapable of having sincere emotional attachments to others, and sees the people he supposedly loves as extensions of himself; they come to believe that even Hodges' own wife and child are part of his act as a con artist, allowing him to blend in and appear normal so as to deflect suspicion. 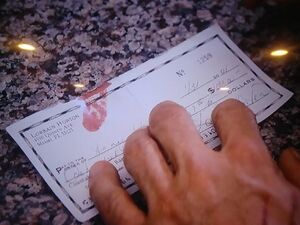 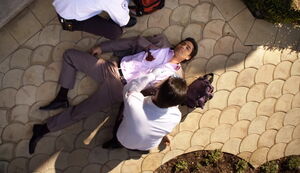