Threatening and abusing his underling Fagin.

Have Fagin pay back the loan money that he owes him.

Use Jenny for a ransom and become rich by holding her hostage (both failed).

Bill Sykes is the main antagonist of Disney's 27th full-length animated feature film Oliver & Company, which is a modern take on Charles Dickens' classic story Oliver Twist. Sykes is therefore based upon the character of Bill Sikes and he is also Fagin's former boss.

Sykes is one of Disney's most heavyset villains, shown usually in shadows like most stereotypical villains. He is an extremely deceitful, cruel, sarcastic and opportunistic individual.

Unusually for Disney, the lifestyle and behavior of a mob boss are not glamorized or made friendlier like a child. Beneath his businesslike exterior, Sykes is clearly a brutal, murderous, sociopathic, and aggressive person. During a scene with Fagin, he is heard clearly on the phone discussing with a supposed underling about their treacherous manner of torturing and murdering some unknown victim.

He also appears to know anyone who is important and wealthy in New York City, even their home addresses, and phone numbers, as seen when he calls the Foxworth estate to begin the ransom. He takes care of his sinister Dobermans a lot. However, in the final chase, when he was so determined to get Jenny back, he did not notice that his dogs died and even if he did, he did not seem to care.

However, despite his cruel personality, he has occasionally shown a sense of honor and forgiveness in his deals; such as when he honored the three days deal with Fagin despite Fagin not paying him after a long time, and upon learning that Fagin has held a ransom for Jenny's pet kitten Oliver to pay him back, he happily gave Fagin an additional twelve hours to ensure of this. Sykes even let Fagin off the hook when Sykes kidnapped Jenny and took the ransom money that she brought, saying to Fagin that his debt is finally paid by declaring that "his account is closed!".

Overall though, despite the times when he can show honor, Sykes is still a sadistic individual and is one of Disney's most intimidating villains.

Sykes has lent a large amount of money to a petty yet kindhearted criminal named Fagin for some unknown reason, sending his two Dobermans named Roscoe and DeSoto to tell Fagin to go up and meet with him. Fagin, unfortunately, finds himself unable to pay the money back and begs for more time. Sykes tells him that he has three days to find the money, or else who knows what will happen to Fagin, his home, or his dogs. Then, he honks his horn to call his dogs back, which frightens Fagin, causing him to fall off the dock and into the Hudson River.

During the night of the third day, Fagin arrives to Sykes' office, where he reveals of his plan of ransoming a pet kitten named Oliver (the protagonist of the film) to have his rich family called the Foxworths to come by to the docks tonight to pay the money in return for their pet's safety. Realizing this and noticing Oliver's gold pet collar, Sykes is very impressed by this and allows Fagin an additional 12 hours, warning him that this will be his last chance.

However, Fagin notices when a young girl named Jenny (the youngest member of the Foxworth family) arrives to the docks, where she has brought the ransom money inside her piggy bank, with Sykes and his dogs unknowingly watching from afar in his Cadillac. When Sykes sees Fagin abandoning the plan by freely handing Oliver back to Jenny without asking for the ransom money, he seizes his chance by driving up, pulling Jenny into his car, and taking her to his warehouse after throwing Oliver out the window, much to Fagin's objection. Before driving off, Sykes orders Fagin to keep his mouth shut, telling him that his debt is now fully paid since he finally got the ransom money to himself.

At his warehouse, Sykes ties Jenny to a chair in the center of his office, boasting her about his dogs by cruelly joking that he will have his dogs eat her, as he plans to use Jenny as a ransom against her rich parents (who are on a business conference meeting in Rome). Sykes then calls Jenny's butler Mr. Winston to inform about the situation, demanding that he get Jenny's parents on the phone to discuss business otherwise Jenny would be hurt.

He hears a strange sound and sends Roscoe and DeSoto to check it out. While watching Jenny, Sykes calls the Foxworth family's butler, Winston, and tells him to call Jenny's father. Oliver, Dodger, and the gang follow them to the warehouse, where they discover that Jenny is being held for ransom.

While Tito, Einstein, and Francis manage to stall Sykes by dressing up as a pizza delivery guy, Sykes is shown loading a handgun, acknowledging that he did not order any pizza. When he leaves to look for his dogs, Oliver, Dodger, and the other dogs manage to enter his office. Finally, he finds his dogs trapped under a net and frees them. When he and his dogs return and find the door locked, he thinks it was Jenny's doing and warns her to open it. Oliver and the gang manage to pull her up into a higher part of the room, with the help of a crane and Tito's electric specialties, before Sykes and his dogs burst through the door.

Sykes grabs an emergency fire axe and destroys the crane's controls, thus, causing Oliver and the gang to fall and slide safely down to the loading bay from a deactivated conveyor belt. At its end, Sykes and his dogs confront them as he prepares to signal his dogs to attack. Before he can, however, Fagin bursts through a window on his scooter and the gang, along with Jenny, hop on and drive away as fast as they can. Unfortunately, Sykes and his dobermans give chase in his car. Fagin swerves into the underground subway tunnels, hoping that Sykes can't follow them there, but the mad loan shark does so anyway.

Now driving like a complete maniac (and not thinking rationally, as he does not even seem to consider the danger and damages), Sykes pulls on the gearshift so hard that it breaks off and then presses hard on the gas. He goes at full speed, making his car's tires wear away on the subway tracks and turning his car into a makeshift hi-rail vehicle. He rams into Fagin's scooter, causing Jenny to fall onto his hood. He then punches his hand through the window and grabs her arm. Oliver sees this, jumps onto Sykes' hand, and bites it. Unfazed, Sykes tosses him into the back seat with Roscoe and DeSoto.

Dodger leaps onto Sykes' car and fights off Roscoe, while Oliver fights off DeSoto, causing both Dobermans to fall onto the tracks and get electrocuted. Sykes takes no notice of his Dobermans' demises and continues to chase the gang. He goes up through his sun roof and grabs Jenny by the leg, trying to pull her back in. However, Oliver and Dodger jump onto him and fight him off, making him release Jenny. Even as Sykes manages to throw both the cat and dog off his car, the crime boss then turns around to see a subway train heading straight for him.

Realizing this too late, Sykes screams in horror as his car collides into the incoming train, killing him in a fiery blaze and sending what remains of him and his car into the East River. 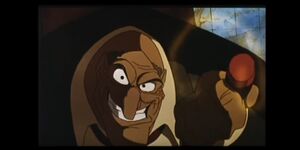 Sykes from the 1988 theatrical trailer not seen in the final release of the film. 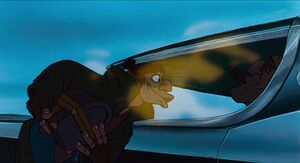 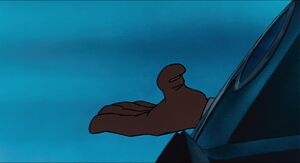 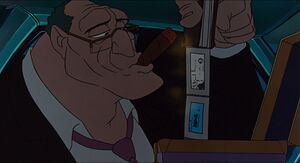 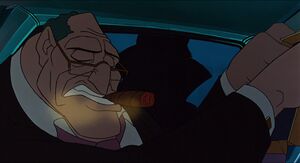 Sykes not pleased with Fagin's "loot." 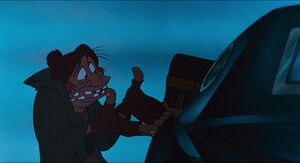 "I don't want your garbage, Fagin." 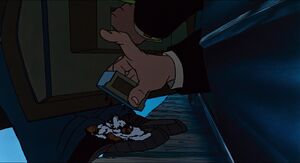 "I don't think you grasp...the severity of the situation." 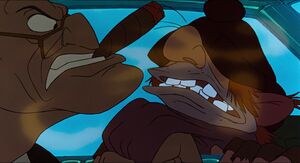 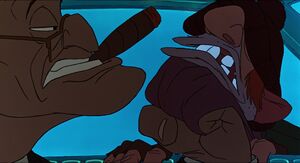 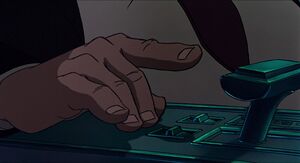 "Do you know what happens when I don't see my money, Fagin?" 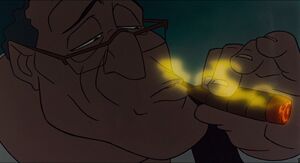 Sykes smoking his cigar as he threatens and tortures Fagin. 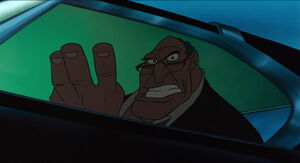 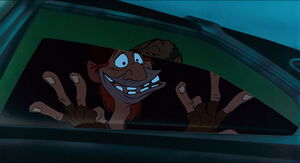 Sykes telling Fagin he has only three days to pay off his debt to him. 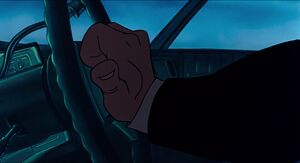 Sykes honking his car horn to call his dogs. 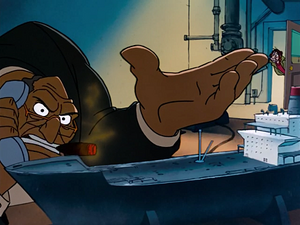 Sykes on the phone to a fellow gangster, giving him tips on how to kill a man. 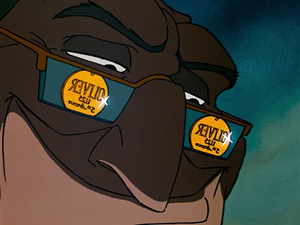 Sykes is pleased with Fagin's plan to use a rich family's pet kitten, named Oliver, for ransom. and Sykes's (unseen) Evil Stare 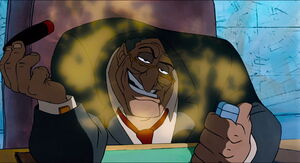 "And Fagin? This is your last chance." (Evil Grin)" 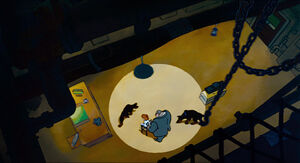 "Now don't cry, little girl. They only eat when I tell them to. (chuckles evilly)" 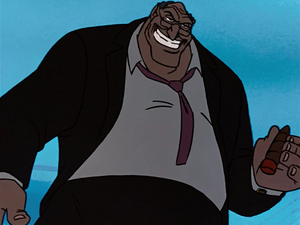 Sykes confronting Fagin's gang of dogs as they try to escape. 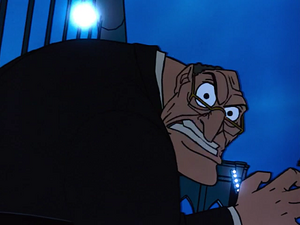 Sykes chasing after Fagin on the Brooklyn Bridge. 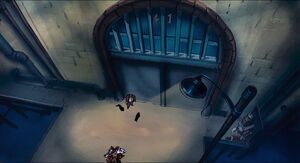 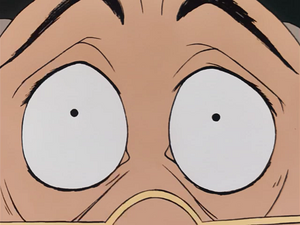 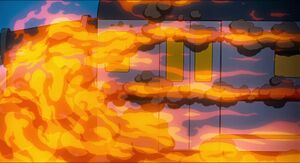 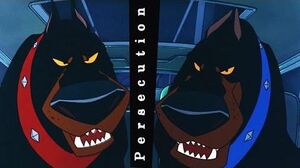