Galactic Swordsman Billion is a left-handed warrior serving as one of Galactic Imperial Army Zone's three Galactic Commanders and a major antagonist in Chikyuu Sentai Fiveman.

He is portrayed by Shunsaku Kudou.

Billion and the other Galactic Commanders accompanied Captain Garoa when he led an attack to destroy Sidon once again after the Hoshikawa family restored life to it.

Later, Billion was among the Zone forces who traveled to Earth to use it as the 1000th planet for their ritual, only to be met by the five Hoshikawa children, who became the Fivemen to defend Earth from Zone.

After the Fivemen thwarted Zone's initial attack and destroyed Gamerugin, Billion summoned in his old partner Torarugin to have him use the Fiveman's protectiveness of their students to Zone's advantage. He had Torarugin take over the body of Takeshi, a boy who was a part of Gaku's classes, and has him attack FiveRed. However, Torarugin soon decides to just take over the body of FiveRed instead and use it to defeat the other Fiveman. Billion then attacks FiveRed, even though his partner was inhabiting the body, stating he and Zone will do anything to accomplish their goals and fracturing their partnership. Torarugin was later forced from Gaku and destroyed.

In another instance, Billion began dating a girl named Mirian Solar from one of the planets Zone had ravaged so he could manipulate her into using a monster form of hers to destroy the Fiveman. After Mirian uses the red pill to permanently become her monster form, Dark Solar, Billion reveals that he was the one who killed her parents when Zone ravaged her planet. This enrages Mirian into attacking Billion, but she doesn't kill him, as she still loved him. Billion then kills her, knowing that the Red Pill would keep her permanently in her monster state.

Billion once managed to assume a more powerful giant form called "Saber Billion" using the Galactic Demon Sword Saberugin, but he was defeated by Five Robo and brought down to normal.

Billion was later present when Galactic Empress Meadow was revealed to be an illusion created by Vulgyre, leading Doldora to have a mental breakdown and be mutated into a Combined Galactic Warrior by Vulgyre. In wake of this, Billion opted to have a final duel against the leader of the Fivemen and went to face Gaku. Billion attempted to stab Gaku but Gunther got in the way and bore the blow instead, dying as a result. Billion then faced FiveRed in a one-on-one duel, tossing away his saké bottle so it shattered as a sign of his resolve. After throwing away his cape, Billion fought FiveRed one last time and was killed by FiveRed using his FiveTector armor to perform a sword thrust that penetrated through Billion, with Billion proclaiming his love for saké before dying. 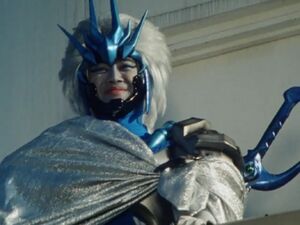 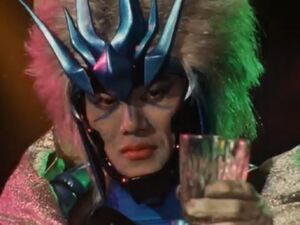 Billion with his wine glass at a Zone party. 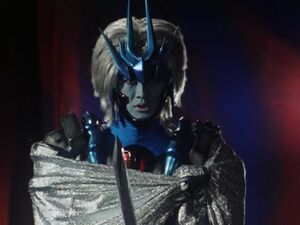 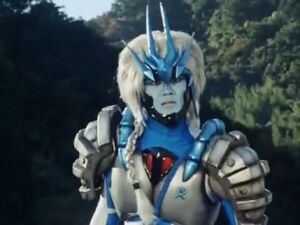 Billion with his cape removed.