The Moaner
The Caller
Billy Lenz

Kill everyone both in his way and both in the sorority house (failed).

Billy, also known as Billy Lenz in the remake, is the main antagonist of the horror film Black Christmas, as well as its remake (in which he earned his second name).

In the original, Billy is an unknown killer who taunts the sorority. In the remake, he was a deranged serial-killer who managed to escape a mental asylum while his half-sister/daughter Agnes (when Billy's mom raped him) started killing the girls in a sorority house which was his old childhood home.

There is almost no information given about the killer in the original movie. All that is known is that a person climbs into a sorority house, and starts making obscene and sexual phone calls to the girls downstairs.

From the phone calls, the audience discovers that the man's name is Billy, and he obviously is mentally unstable. Billy routinely repeats phrases over the phone that give hints to his identity. It is assumed that he sexually abused his younger sister Agnes. And his parents abused him regularly.

Billy goes on a killing spree killing the girls in a delusional rampage. He attempts to kill a girl named Jess but she manages to lock herself in the cellar. Her boyfriend Peter gains access to the cellar and believing he is the killer making the phone calls, ends up bludgeoning him to death in "self defense" and she is later discovered by the police, making them believe Peter must have been the killer all along.

The police leave Jess to sleep and leave, while one cop waits outside for forensics to arrive. However the camera pans into the attic where the two bodies of Billy's victims are still there, and he can be heard saying "Agnes, it's me Billy"; the telephone then rings. The ultimate fate of Jess is left ambiguous to the audience.

Much more information is giving about Billy's back story in the remake. It's revealed that he has a rare liver disease that gives him jaundice. His mother and father hate each other, but his father cares about his son while his mother hates Billy for reminding her of her husband.

One Christmas, Billy's mother and her boyfriend murder Billy's father. They then bury the body under the house and lock Billy in the attic.

Billy never leaves the attic and makes it his home. When Billy is twelve, his mother rapes him, and becomes pregnant with his half-sister/daughter. She names her Agnes.

Agnes is treated like a princess and given the life that Billy never had. When Billy reaches adulthood, he goes on a killing spree one Christmas. He rips out Agnes's eye and eats it. Then he kills his step-father and mother.

When the police arrive, they find him eating his mother. He is declared insane and sent to an asylum.

During the events of the film, Billy's old home is turned into a sorority house. Billy escapes from the asylum and together with Agnes, kill many of the sorority girls in his former home. At the end of the film, Agnes is killed by Kelli, after a brief chase with Kelli, Billy and Kelli end up in the stairway of the hospital, Billy attempts to attack her, but Kelli grabs him and tells him, "Merry Christmas, mother-fucker", she then ends up throwing Billy off the stairway in which Billy falls and gets impaled on a christmas tree, finally killing him and ending his killing spree. 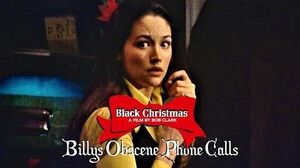 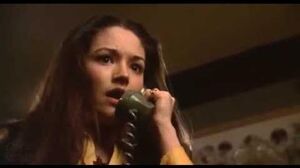 Black Christmas (1974) - Jess's Chase Scene
Add a photo to this gallery
Retrieved from "https://villains.fandom.com/wiki/Billy_(Black_Christmas)?oldid=3727314"
Community content is available under CC-BY-SA unless otherwise noted.