William "Billy" Capra is the main antagonist in the Grimm episode "Lonelyhearts". He is a Ziegevolk, a goat-like creature that possesses the power to secrete special pheremones that force women to become madly attracted to them, while the majority of his kind were mearly more attractive and were often ladies men. Billy was of a subspecies, who could produce much more powerful pheremones, ones so strong they literally forced women to obey there every command. He enhanced this through eating toads.

He was portrayed by Patrick Fischler.

Billy set up his technique, he would first meet the women, then get them under his spell, then he would kinap them and keep them imprisoned in his basement. He ran a hotel and often got his guests under his spell. However one of his prisoners managed to escape, Billy tracked her down and suffocated her to cover his tracks.

This murder attracted the attention of Nick and Hank, who investigated him, upon telling Monroe about what Billy realy was, Monroe revealed that Billy wasn't a typical Ziegevolk, but a very dangerous one. While he was out looking for more victims, Hank broke into his bed and breakfast, located his victims, and with Nick's help freed them. Realising he was in trouble, Billy took one last guest and ran off with her. But Hank had already placed a tracking device under his car.

Tracking him down, Billy showed his true colours and scarpered, Nick and Hank did chase, but using his goat powers of agilty and speed Billy managed to outrun them, but as he ran across a street, a lorry crashed into him crippling him. He was last seem once again seducing the paramedic who was treating his wounds. 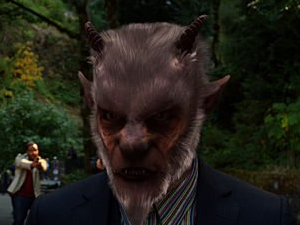 Add a photo to this gallery
Retrieved from "https://villains.fandom.com/wiki/Billy_Capra?oldid=2988203"
Community content is available under CC-BY-SA unless otherwise noted.