Billy Cole was the secondary antagonist of the 1985 horror film, Fright Night. He was the personal bodyguard and right-hand of Jerry Dandridge, and also the partner of Evil Ed.

He was portrayed by Jonathan Stark.

Billy first appeared with Jerry when they moved into Charley's neighborhood and helped Jerry grab a coffin.

He was later seen protecting and hiding Jerry from the police and said that Jerry was not a vampire as Charley had said, which obviously worked. When the police left, Billy watched Charley from his house and smiled to him, which made Charley run away from the house.

He appeared when Charley and his friends visited their house. Charley then tried to show that Jerry was a vampire. Billy was suspicious of that, but Jerry accepted the challenge. Jerry then drank holy water and nothing happened to him. Charley then implied that the water was not blessed and asked if Jerry could grab a crucifix. Actor Peter Vincent then became frustrated and made Charley and his friends go out, except him. Peter then used a mirror and became scared when he realized that Jerry had no reflection. Peter then ran away from the house in fear.

Billy made a minor appearance in the Club Rad scene: he was seen inside of the car with Jerry, Evil Ed, and Amy. He was last seen near the end of the film, where Charley and Peter broke into their house for a final showdown. Billy protected Jerry from Charley's crucifix and knocked him out. In Billy's most notably largest role in the film, Peter shot him point blank, without any effect. Then Peter finally shot him in the face. Billy then returned as zombie-like figure, Charley and Peter grabbed a giant wooden stake-like object and impaled him in the chest, which caused Billy to melt into green goo and sand and left only his skeleton that then shattered into pieces. 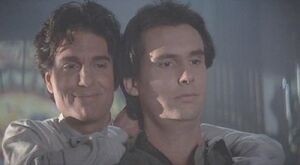 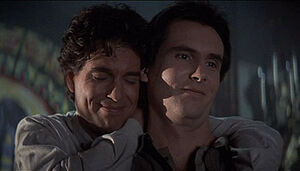 Billy shot in the head by Peter. 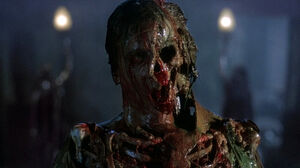