Bar stage performer (until his death)

Force everyone to listen to his music (succeeded)

Billy Joel is the main antagonist in the season four Robot Chicken episode "Tell My Mom", based on the musical performer of the same name.

He is voiced by Zac Efron, who has also portrayed Ted Bundy in Extremely Wicked, Shockingly Evil and Vile, and Teddy Sanders in Neighbors.

One With The Joel

At a bar set on a pier, Billy Joel meets with a man named Davy who works in the United States Navy and notices how well "Davy in the Navy" rhymes, but Davy asks Billy to not use his name in a song as he's on the run from creditors, and Billy pretends to honor his request. When Davy isn't looking however, Billy knocks out Davy with with a beer bottle and then throws his body into the ocean to kill him, declaring he'll live on in his music as "one with the Joel".

Down On Your Knees, I'm The Piano God

Sometime later, Billy is on stage once again at the bar where he performs a song where he repeatedly insults a man named Pete as well as every other person who even gives him money for his performance. This continues until the crowd starts angrily booing Billy, so he pulls out a pistol to not only silence them but also stop them from trying to leave until he's done with his song.

Afterwards outside of the bar, Billy is annoyed he was only tipped with "singles" and he's suddenly ambushed by Pete and violently stabbed to death in retribution for insulting him and sleeping with his wife. 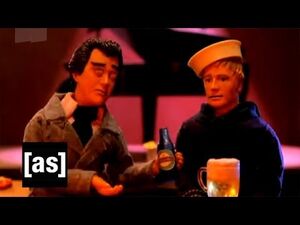 One With the Joel - Robot Chicken - Adult Swim 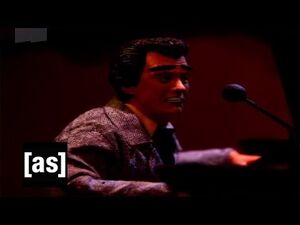 Down On Your Knees, I'm the Piano God - Robot Chicken - Adult Swim