Keeps mercilessly killing anyone who dare to set foot on the grounds of Camp Blue Finch.

Killing anyone who are at the moment of either becoming sexually aroused in any way or on the verge of having sex upon his incoming presence.

To prevent both Max Cartwight and her friends from escaping his move world alive at all.

Billy Murphy is the machete-wielding mass murderer and the main antagonist of the 2015 slasher comedy movie The Final Girls. He serves as the main villain of 2 fictitious 1980s slasher films titled "Camp Bloodbath" and "Camp Bloodbath 2: Cruel Summer". He is also a classic parody of another horror icon Jason Voorhees of Friday the 13th fame.

He is portrayed by Dan B. Norris, and his younger self (credited as "Young Billy") is played by Eric Michael Carney.

What is known about Billy Murphy, according to the storyline of fictitious 1986 slasher flick Camp Bloodbath, is that long ago, he was a poor and shy, (possibly orphaned) skinny young boy who was always bullied throughout his whole life by other people including children because of his slightly (off-screen) deformed face, and for being different, and without any friend. And in the hottest summer of 1957, while being tormented by foolish mean boys at Camp Blue Finch and hiding from them in a wooden porta-potty, the 8 male camp counselors who hated Billy Murphy, arrive at the camp and later decided to pull a prank on him, one that unbeknownst to them, will seal their fate and that of all the present campers under their care at the camp. They lit a bunch of firecracker explosive and threw at the upper opening of the porta-potty door. Because of that and none of his peers bother to help as they cruelly laughed at him, Billy Murphy suffers third-degree burns all over his body, and the only thing that could distract Billy from his horrible pain was thinking about what was done to him, and during those long, agonizing nights in the camp's burn ward, Billy's fear was slowly replaced by his own hatred. His face would never be the same again as it was severely scarred beyond repair, and he never spoke a word since that horrid ordeal. And so, he crafted a wooden, horrific mask to his scars on the outside, but his rage sprouts from within. All Billy Murphy wanted was to make everyone afraid as he was on that terrible day. He returned to Camp Blue Finch that very night with a huge machete blade and that is when his bloody reign of terror first began as he slaughters the 8 counselors and later the boys who teased him, sleeping in their beds, one for every month he has spent in that hospital bed at the camp's burn ward, and he finally achieved his revenge he longed for before disappearing into the night. And according to the Camp Bloodbath 2 film series' mythos, he became a legend around Camp Blue Finch since that night, as he still resides in a little shack within a nearby woods next to the camp, waiting for new Camp Blue Finch counselors to cross his path, waiting to seek vengeance again, and again.

Maxine "Max" Cartwright waits in the car while her actress mother, Amanda, auditions for a film. When she returns, Amanda complains that, for the rest of her career, she will be known for her role as scream queen Nancy in the 1986 slasher movie Camp Bloodbath, now a cult classic. On the way home, the two get into a car accident, leaving Max as the only survivor.

3 years later, on the anniversary of her mom's death, Max studies with her best friend Gertie and crush Christopher "Chris" Briggs. Gertie's stepbrother Duncan, a big-time horror fan, shows up and convinces Max to attend a special double-feature showing of Camp Bloodbath and its sequel, Camp Bloodbath 2: Cruel Summer, as a special guest. At the screening, Max is none too happy to find Chris' possessive ex-girlfriend Victoria "Vicki" Summers there. During the film, the raucous crowd accidentally sets the theater ablaze (with the ash of a weed blunt and a bottle of liquor). In order to get to safety, Max rips a hole through the screen.

Max, Chris, Gertie, Duncan, and Vicki find themselves waking up in the woods. They encounter characters from Camp Bloodbath, including Max's mother, in character as the nice girl Nancy, and they realize they have now somehow been transported inside the movie. The group awkwardly pass themselves off as new camp counselors arriving for the season at the eponymous Camp Blue Finch, and let the first couple of murders happen without interference. However, when Duncan is killed by Camp Bloodbath‍‍'​‍s machete-wielding villain Billy Murphy, they realize that they also run the risk of being murdered.

The group decides to stop the characters from having sex, as whenever someone does so in Camp Bloodbath, they fall prey to Billy's machete. Chris distracts horn dog Kurt and Max persuades Nancy to stay a virgin, while Vicki sticks with the movie's final girl Paula and Gertie bonds with counselor Blake. When Gertie brings up the topic of Billy Murphy, the counselors are alerted to the fact that "urban legend" Billy is "real" and will come to kill them. In a panic, the counselors try to flee the camp. Kurt and Paula flee in the car, while Duncan emerges still alive. The two hit Duncan with the car and crash into a totem pole, resulting in their deaths.

Now aware that the characters who originally survived the movie can die, Max and the others decide to save anyone they can. They dress flirty airhead Tina in a life jacket and mittens, to prevent her from undressing. They also decide that Max, the only remaining virgin, is the new final girl, and plot to get Billy's machete into her hands so she can kill him and end the film. Meanwhile, Max and Nancy bond, and theorize that, if Nancy survives the movie, she can go back home with Max and be whomever she wants to be.

The group booby trap the cabin, and Tina lures Billy to them by performing a striptease. However, Tina becomes frightened when he arrives. She runs from Billy but trips over a wire and falls into a bear trap, killing her. Subsequently, Blake, Vicki and Gertie are killed while trying to defeat Billy. Chris, Nancy, and Max flee the cabin, and Billy chases after them. Chris is stabbed, and Billy kidnaps Nancy. Max leaves Chris at an abandoned chapel in the woods and goes to rescue Nancy, though Chris tells her that Nancy can't be saved. Max finds her at Billy's barn, and the two women fight him.

Nancy realizes that Max cannot defeat the killer because she is not yet the final girl. She sacrifices herself by luring Billy with a striptease, but not before Max tells her Nancy's real life counterpart is her mother. Nancy is killed and Max collapses. She re-awakens, now the final girl, with the power to kill Billy. Max then battles Billy, and eventually decapitates him. A wounded Chris arrives and the two kiss, while Camp Bloodbath‍‍ '​‍s closing credits play in the sky.

Later, Max wakes to find herself in the hospital, alive and reunited with her friends (and unfortunately the perverted camp counselor Kurt in bandages as intended by the Camp Bloodbath producers to part of the movie's sequel as shown and mentioned in one of the film's deleted scenes). Just then, the group hears Billy Murphy's approach tune, and realize they are now trapped in the sequel, Camp Bloodbath 2: Cruel Summer. Using a drip stand as a weapon, Max lunges at Billy, ending the film. 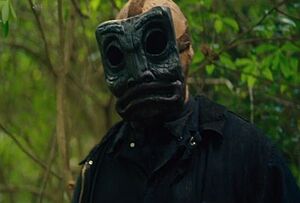 Billy Murphy in his adult form.

Billy Murphy on his another relentless and bloody rampage.
Add a photo to this gallery

Retrieved from "https://villains.fandom.com/wiki/Billy_Murphy?oldid=3700758"
Community content is available under CC-BY-SA unless otherwise noted.