Dimwitted Thrill-Seeker
Billy Numerous is the fifth member of the H.I.V.E. Five and a major antagonist in Teen Titans Go!. He is a hillbilly boy with the ability to clone himself.

In "Super Robin", Billy Numerous assisted The H.I.V.E. Five in robbing a bank by creating a bunch of clones of himself, who all passed big bags of money down from the bank to the getaway truck. In battle, Billy Numerous fought with Starfire. Billy Numerous surrounded Starfire with clones and Starfire used her laser eyes to vaporize all of them from existence, leaving the original Billy Numerous, burnt to a crisp.

In "Artful Dodgers", The H.I.V.E. Five became a dodgeball team called The H.I.V.E. Fivers, but the only three members of the team, who actually got to play were Jinx, Gizmo, and Mammoth, while Billy Numerous and See-More were benched in every game.

In "No Powers", two Billy Numerous clones were slammed into the ground by Raven's walker.

In "Power Moves", Billy Numerous faced off against Cyborg and Beast Boy. He made nine clones of himself and Beast Boy used Cyborg's head as a bowling ball to knock all ten Billys down like bowling pins.

In "The H.I.V.E. Five", Billy Numerous took some time off from being evil to enjoy himself. He went to a baseball field and created tons of clones of himself to make for two teams, an announcer, and a crowd of screaming fans. Billy Numerous hit a home run and the baseball went right out of the park and landed on Raven's head, angering her. Raven flew over to the baseball field and attacked all of the Billys with a reign of demonic darkness as an act of petty revenge.

Billy Numerous is a Southern hillbilly boy with a red suit and a big chin. He wears black glasses and has a division symbol on his chest.

Billy Numerous acts like a stereotypical redneck hillbilly. He acts nutty and goofy and provides comic relief to the team. Billy often communicates with his clones as though they were other people and even manages to hold up an entire relationship with all of them, being able to form a coherent baseball team and play a full game with them. This included making enough clones for an announcer, a hot dog vendor, and a large crowd. All of his clones stay perfectly in character and no matter how many of these clones he makes, he's able to operate them all at the same time, since all of his clones are technically their own organisms with their own personal mindsets. 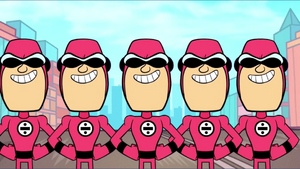 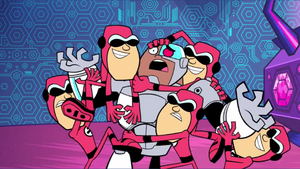 Billy Numerous and his clones swarming Cyborg and taking him down 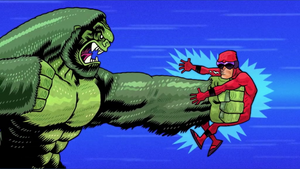 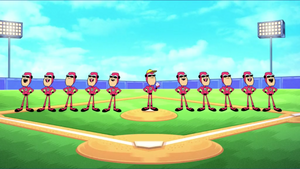 Billy Numerous playing baseball against many clones of himself 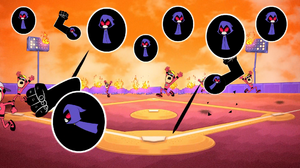 Billy Numerous and all of his clones being attacked by Raven 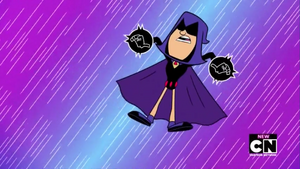