Escape the island with the dino embryos and become rich.

Kill anyone who stands in his way (both failed).

William "Billy" Yoder is the anti-heroic deuteragonist-turned-main antagonist of Jurassic Park: The Game. He is a mercenary and one of several sent to Isla Nublar after the disaster of Jurassic Park on the island, tasked by InGen to rescue the Hardings, Laura Sorkin and Nima Cruz from the area.

He was voiced by Jason Marsden, who also played Billy Numerous in Teen Titans.

Hailing from San Jose, California, Billy Yoder appears to be in his late 20's or early 30's. He mentions having a step-brother who used to hide a second set of house keys in a fake soda can.

During the scene when Yoder refers to Oscar after he died, he says "a bunch of blue collar grunts". This has something to do with Oscar's death, but he could be referring himself as a dropout person during his life in high school. This also happens when he refers to D-Caf as "another throw away grunt", meaning this has nothing to do with Oscar and D-Caf's early lives before they died. At some point, Yoder decided to become a mercenary. This is where he met Oscar Morales and once went on a mission to Nicaragua where most of their fellow mercs died.

During the storm, most InGen personnel were evacuated from Isla Nublar. However, some people were left behind. InGen hired two teams of mercenaries to retrieve and rescue the remaining Jurassic Park staff on the island. Yoder and Oscar were on the Alpha Team. Upon arriving, he has a run-in with a mother Dilophosaurus after accidentally stepping on one of her eggs while trying to pick up the trail of the remaining survivors. Soon after, he and Oscar Morales begins rounding up the survivors. He meets a female employee, who informs him of the shocking events that happened at Jurassic Park.

Along the way, he and Oscar meet the Hardings: Gerry Harding, his daughter Jess Harding, and smuggler Nima Cruz. At first, he is sympathetic towards the dinosaurs, ordering Oscar not to kill a Dilophosaurus that he had wounded. But as time wears on his respect for them wears thin after seeing them kill his friends. He develops a rising resentment towards Laura Sorkin's motherly devotion to the dinosaurs, often contemptuously referring to them as her "freak show" or "pets" simply to spite her, and taking great care to emphasize that they will all be destroyed in the Napalm bombing.

His hatred for her rises continuously after the deaths of Oscar and D-Caf, and when she quietly reveals that she had known about the Troodon, he threatens to kill her, only to be stopped by Dr. Harding, Jess, and Nima, but not before forcing her at knifepoint to admit that everything had all been her fault. After the deaths of his two best friends, he goes insane and betrays the group. He also decides to take the Barbasol can for himself, so that he would be paid for the embryos. He offers to take Nima along, but she is disgusted by his betrayal and refuses.

As Nima and Yoder later fight over the can, Rexy, the old Tyrannosaurus rex of Jurassic Park, approaches the group, and Yoder stands still. But Gerry, deciding to get Rexy's attention to Yoder, kicks the Barbasol can so that it would fall into the ocean. Yoder ran after it and managed to grab it just before it dropped. When he gets up, however, he only hears Rexy growling behind him before she suddenly snatches up Yoder in her jaws and devours him. 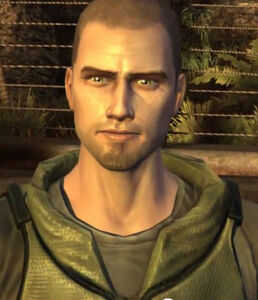 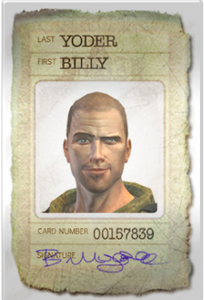 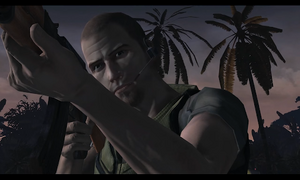 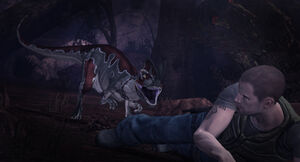 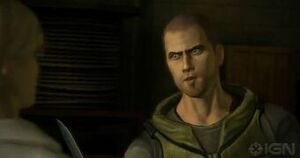 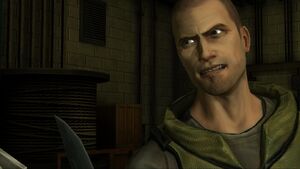 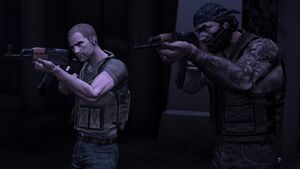 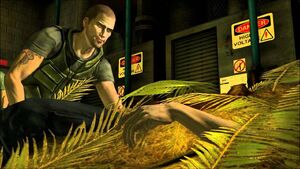 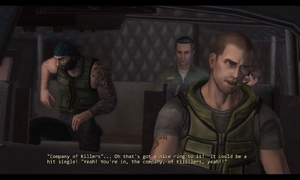 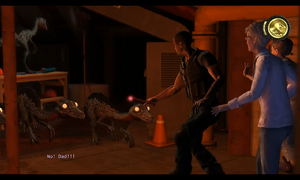 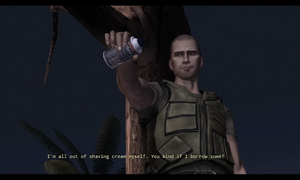 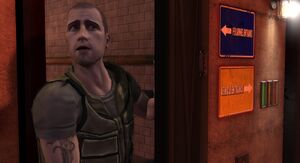 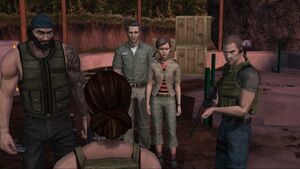 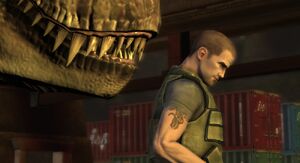 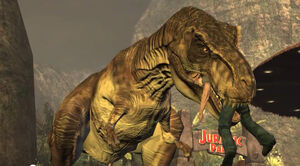 Billy's death as he is devoured by Rexy.