Bio Strong is one of the final bosses of Darius II. One of Belsar's commander flagships during their attack to the Solar System, Bio Strong is odd in that, instead of being shaped after a marine creature like all other Belsar battleships, it is actually a biological monster which takes on the form of a embryo inside a bubble. It is implied that Bio Strong can grow, though it is unknown what form it would take then.

Bio Strong's main form of attack is to summon various bubbles, sending them in a spread pattern. It will remain shrunk amongst all those bubbles, returning to it's original form after taking some damage.

In Super Darius II (a remake of Darius II for the PC-Engine) a modified form of Bio Strong called Mech Bio Strong replaces it. This one is a large stationery enemy, appearing as a giant mechanized alien. It's attacks include shooting homing missiles, lasers, spitting bubbles (similar to the ones of the original Bio Strong) and extending it's tongue. 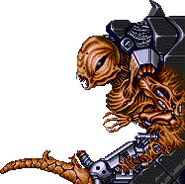 Mech Bio Strong
Add a photo to this gallery
Retrieved from "https://villains.fandom.com/wiki/Bio_Strong?oldid=1845300"
Community content is available under CC-BY-SA unless otherwise noted.