Field leader of the Pack

Aid the Pack in defeating Rex.

Biowulf is a recurring antagonist of the animated series Generator Rex. He a biomechanical wolf-like E.V.O. who is the second-in-command of Van Kleiss' followers, the Pack.

Biowulf is an E.V.O with an attitude. His incredible speed, cunning and ability to leap five times his own hieght has led Biowulf to become Van Kleiss' right hand E.V.O. Couple Biowulf's abilities with his razor sharp claws and he becomes a force to be reckoned with. It is interesting to note Biowulf has a more intelligent and calculating mind than most E.V.O's. Not only does he call the shots when Van Kleiss is absent, Biowulf also informs his boss of tactical advantages.

Biolwulf's personality is cold and calculating, the only humanitarian aspect is his loyalty to Van Kleiss. They show Biowulf to be worried about Van Kleiss due to his power being reduced outside of Abysus. Biowulf rarely speaks, and when he does, it is usually presumed or to convey orders to fellow subordinates, or give Intel / opinion of his teacher, Van Kleiss. Biowulf would refuse to leave the base without Van Kleiss, therefore he would be caught in the explosion when the reactor blew up. They show Biowulf as a tactical leader of the team, but he really shows very little care towards his subordinates. He is openly very hostile towards Circe. Biowulf is shown as a tactical leader to dislike "Jungle Cat", the newest member of the team. He can be heard growling when Van Kleiss chose the most recent member of the team and later Biowulf would dump the petrified remnants of Jungle Cat. Biowulf seems to get the best of all team members with Skalamander; The two have been together on missions more often.

Biowulf is a skilled melee fighter, holding his own in a fight, even against a renowned boxer as Agent Six. Biowulf's weapon of choice is his own body, his sharp claws prove to be formidable in battle, even against agent Agent Six of Katanas. Biowulf also has sufficient leadership capacity. Always Van Kleiss is out of service or unavailable, Biowulf is automatically named the de-facto leader of the pack.

Biowulf is very strong, is able to jump hundreds of meters in the air, in order to destroy airplanes as seen in "Dark Passage." Although this is only seen from side to side and down, not up. 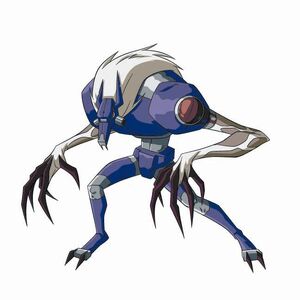 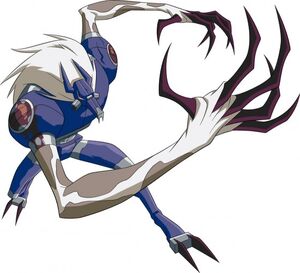 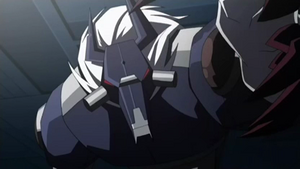 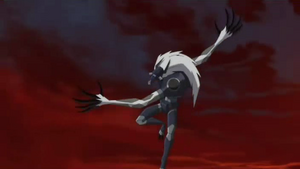 Biowulf tries to attack the refugees. 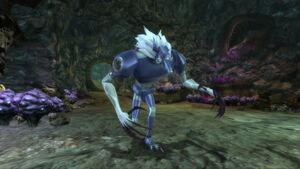 Biowulf in Generator Rex: Agent of Providence.
Add a photo to this gallery

Retrieved from "https://villains.fandom.com/wiki/Biowulf?oldid=4137454"
Community content is available under CC-BY-SA unless otherwise noted.