Birchibald "Birch" T. Barlow, also simply known as Birch Barlow, is an antagonist from The Simpsons series. He is a right-wing conservative talk show host on the radio station KBBL. He also has a show on Fox News.

On air (and presumably personally), Birch Barlow is a radical conservative, highlighted by his book, "Only Turkeys Have Left Wings". His on-air rantings are intentionally engineered to be controversial and to rile up the audience, in order to convince them to call, as do many talkback radio hosts.

On his radio show, he declares himself to be "the fourth branch of government" and "the 51st state". Barlow was instrumental in getting Sideshow Bob released, due to sympathy to Bob as well as believing his story about being framed.

He also ended up "accused" by Lisa of being the true mastermind behind Bob with the implication of Bob simply being a puppet Mayor in order to trick Bob into confessing to some of his crimes in court (with Birch Barlow also trying to dissuade the shocked audience in regards to the accusation). 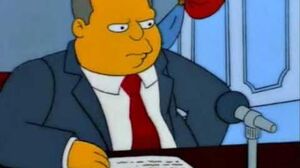