Villains Wiki
Register
Don't have an account?
Sign In
Advertisement
in: Guardians, On & Off, Mario Villains,
and 24 more

Shooting eggs from its mouth

Protect the key to the Nimbus Land's royal palace from trespassers (both failed).
Prevent Cackletta and Fawful from stealing Princess Peach's voice (succeeded).
Help Popple to defeat the Mario Bros (failed).
Various other goals. (currently; mainly in assisting Mario and his friends, and being with Yoshi, her love interest)

Birdo is a recurring character in the Super Mario Bros. videogame series. In fact, there have been multiple characters known as "Birdo", similar to the multiple Yoshis that have appeared throughout history. The concept of a Birdo character was not solidified until the same pink Birdo began appearing in various spinoff titles.

The central Birdo character (that appears in the Mario Kart series, the Mario Party series, and the various sports titles) is mentioned to be male in the game manual for the original Doki Doki Panic videogame.

Birdo also has some sort of relationship with Yoshi, as they are the automatic partners in various competitions. She is a good friend of Princess Daisy, Toadette, and Petey Piranha. Other Birdo characters have resided in Subcon, in Nimbus Land, and in other locales.

She is voiced by Kazumi Totaka.

This game marks the debut of Birdo and its species. They serve as bosses and come in three different varieties: Pink Birdos only fires eggs which can be grabbed and thrown, red Birdos can spit harmful fireballs as well as eggs, and green Birdos will only shoot fireballs. Some of them will hold something of value and need to be defeated in order to proceed through the game.

Birdo and its kind make their first appearance in the Mario series. They serve the villainous 8 Bit Club and share the same roles they had in Doki Doki Panic.

Birdo returns as a boss while Prince Mallow's home Nimbus Land is under the control of the snobbish lady Valentina and her minions. While Mario and company explore the skyfaring kingdom's royal palace, they come across a large egg called "Shelly" that requests the party "play" with it before hatching in a Birdo. In battle, Birdo will either launch explosive eggs at the heroes or summon Eggbert enemies to its aid. Should Birdo be defeated, it will drop a key that unlocks the next room.

In the Gameboy Advance remake of Super Mario Bros. 2, Birdo is fought in all areas as it was in the original. The remake also introduces Robirdo, a large robotic Birdo who replaces Mouser as the boss of World 3-3. Similarly to the other Birdos, it is defeated by throwing its projectile eggs back at it.

In this game, Birdo assists Prince Peasly and Princess Peach in preventing Cackletta from stealing the Princess' voice. However, Birdo later becomes Popple's new henchmen (or "Rookie") and fights the Mario Bros. alongside him. After they are defeated, Popple blames Birdo for their failure, causing it to kick him away. Birdo then discusses its new dedication to strive towards super-stardom while also expressing anger at the Mario Bros. before running away.

Birdo plays the same role as it did in the original game. In Minion Quest: The Search for Bowser, Birdo appears in the level "Popple's Partner, Part 2" during the audition for Popple to find another rookie. It then fights against Captain Goomba's squad during the final wave of the level alongside Popple. After their defeat, Birdo drags the wounded Popple away.

Birdo appears in the audience spectating the "Megaton Punch" minigame and the battle against King Dedede in "Spring Breeze".

Birdo can be one of the opponents chosen during easy or normal challenges.

Birdo can appear as an obstacle on the Mushroom Kingdom II stage, using its sprite from Super Mario All-Stars. It will appear from the side of the stage and shoot eggs at the fighters. It can be defeated by either attacking it enough times or by throwing its eggs back at it. Birdo also appears as a trophy, which along with the Pidgit trophy, is required to obtain to unlock Mushroom Kingdom II.

Birdo appears a trophy, unlockable by clearing All-Star mode on Hard difficulty. Birdo is also one of the random names chosen for a custom stage.

While absent in the 3DS version, Birdo appears as a trophy in the Wii U version.

Birdo returns along with the Mushroom Kingdom II stage, behaving exactly like it did in Super Smash Bros. Melee. Birdo also appears as an ace class primary grab-type spirit, which can be summoned using the cores of T-rex and Starly.

Birdo seems to have a very feminine personality and adores being in the spotlight. Despite some of Birdo's past actions, it is not truly villainous at heart. Whenever Birdo opposes Mario and his allies, it seems to do so purely for fame, glory, and perhaps even love.

Birdo's most well-known ability is to fire eggs from its "mouth", although some other Birdos can spit fireballs as well. Birdo is also very good at sports, driving and various other activities. 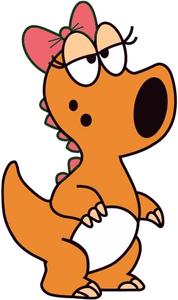 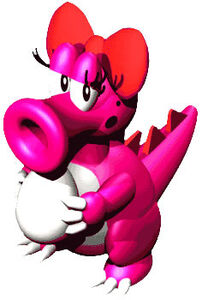 Birdo in Super Mario RPG: Legend of the Seven Stars. 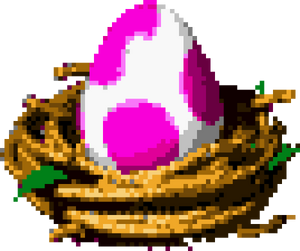 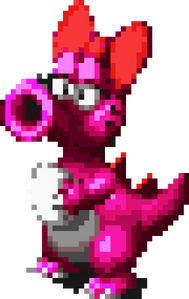 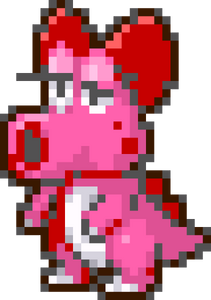 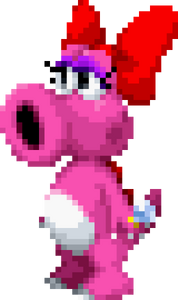 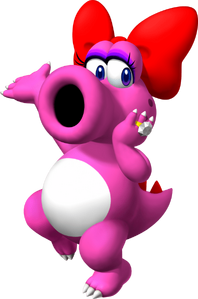 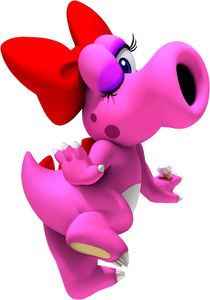 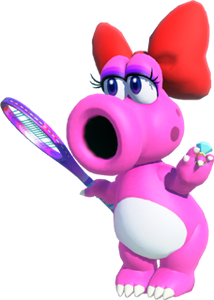 Birdo as she appears in Mario Tennis Aces. 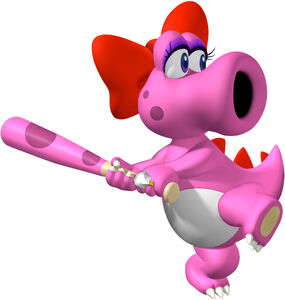 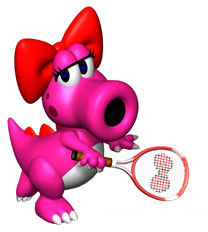 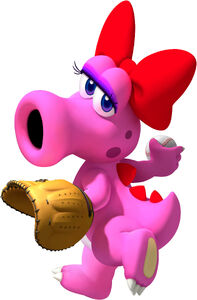 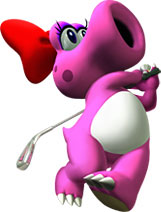 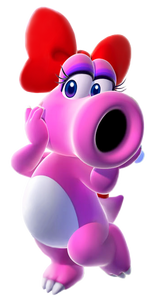 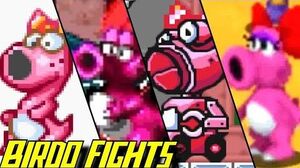