Kill Peter and his friends and support Blackbeard in taking over the Fairy King don and the whole of Neverland (failed).

Bishop is the secondary antagonist of the 2015 fantasy film, Pan.

He was portrayed by Nonso Anozie.

Bishop is Blackbeard's second in command and part of his pirate crew to hunt down Peter Pan.

Bishop led the pirates who snatched many male children to work for Blackbeard.

Bishop later informed his boss that the natives had killed 40 of their best men, and said that in the right time they would be stopped. Blackbeard angrily argues with him, saying that while his men are dying, he says that the natives will be stopped in the "right time".

After Peter escaped Blackbeard, Bishop led Blackbeard's best men in hunting Pan, Hook and Smee. He, Blackbeard and many other pirates met Smee who in turn for his life, revealed essential information about the natives. Bishop then participated in the attack at the village.

Blackbeard's men then invaded the hive of the fairies, Bishop among the men. When they were incinerating the fairies, they were stopped by Hook who crushed his ship at Blackbeard's. Bishop then jumped at Hook's ship to kill him, and was stunned and fought Hook for some time. He fell to his death after the ship went upside down. 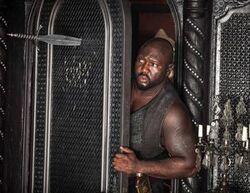 Bishop falling to his death.
Add a photo to this gallery

Retrieved from "https://villains.fandom.com/wiki/Bishop_(Pan)?oldid=3700777"
Community content is available under CC-BY-SA unless otherwise noted.