Have the Holy Grail destroyed (failed).

Bishop Manuel Aringarosa is a fictional Spanish bishop and a secondary antagonist in the controversial 2003 novel The Da Vinci Code and its 2006 film adaptation of the same name.

He was portrayed by British actor of Spanish and Italian descent, Alfred Molina.

Bishop Aringarosa is the worldwide head of Opus Dei and the patron of the albino monk Silas. Five months before the start of the narrative, he is summoned by the Vatican to a meeting at an astronomical observatory in the Italian Apennines and told, to his great surprise, that in six months the Pope will withdraw his support of Opus Dei. As he believes that Opus Dei is the pulse keeping the Church from disintegrating into what he sees as the corruption of the modern era, he believes his faith demands that he take action to save Opus Dei. Shortly after the meeting with the Vatican officials, he is contacted by a shadowy figure calling himself "The Teacher", who has learned somehow of the secret meeting. The Teacher informs him that he can deliver an artifact to Aringarosa so valuable to the Church that it will give Opus Dei extreme leverage over the Vatican. The artifact is in fact a keystone which provides clues that lead to the legendary Holy Grail. Although the Teacher doesn't provide him with any contact information, Aringarosa is extremely intrigued about this and willingly agrees to cooperate.

The Teacher requests that for a short period Aringarosa and Silas cannot communicate, while Silas does his bidding. Unbeknownst to Aringarosa, the Teacher instructs Silas to kill the four top members of the Priory of Sion, a secret organization pledged to protect the secret of the Grail. On the same night Silas kills Priory leader Jacques Saunière, Aringarosa goes to the Papal Palace of Castel Gandolfo to retrieve bearer bonds worth twenty million euros from the Vatican, as instructed by the Teacher. While leaving, Aringarosa is suddenly afraid that the Teacher would suspect him of running away with the money, as he couldn't be contacted in the hills with no phone signal. Unable to contact the Teacher, he calls the Opus Dei headquarters to ask if he had any messages. To Aringarosa's surprise, the sole message was not from the Teacher, but from a French police captain Bezu Fache. Fache tells Aringarosa that that his fellow nun Sister Sandrine Bieil has been murdered and asks him for information. Aringarosa realizes that Silas had killed Sandrine and that the Teacher had deceived him. He tells everything to Fache, and Fache also realizes that he had wrongly accused Robert Langdon for killing Saunière.

While Fache tries to track down Langdon who still thinks Fache is trying to arrest him, Aringarosa takes a flight to Paris to meet Fache and find Silas. However, he is later informed that Langdon and his allies have fled to London with a captured Silas, and so he goes there instead. Meanwhile, after setting up a fake kidnapping scene using Silas, Sir Leigh Teabing (who is actually the Teacher) makes an anonymous call to the police and tells them that Silas is staying at the London Opus Dei Centre. Aringarosa goes there after arriving in London, and sees Silas shooting some policemen. Filled with disbelief, Aringarosa tries to stop Silas but Silas shoots him by mistake. He is then taken to the hospital by Silas and recovers shortly after. Silas, however, dies of a gunshot wound inflicted during his fight with the police. In remorse over the revelations of Silas, Aringarosa asks Fache to distribute the bearer bonds among the families of Silas' victims.

In the film, Aringarosa is a member of the Council of Shadows, a secret organization dedicated to the destruction of the Sangreal and its bloodline. His character is more greedy and sinister than is portrayed in the book; he has even tricked Bezu Fache into believing Langdon was the murderer. At the end of the movie he is placed under extremely high watch by Fache. 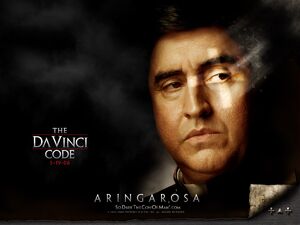 Retrieved from "https://villains.fandom.com/wiki/Bishop_Manuel_Aringarosa?oldid=3445462"
Community content is available under CC-BY-SA unless otherwise noted.