Priest of the Holy See

Torturing and killing those who sees as sinners.

Praying to God by slamming his face on the ground a thousand times.

Mozgus was one of the Chief Inquisitors of the Holy See, traveling the world with his group of torturers, sent to root out a violent cult of heretics in the city of St. Albion. He was the main antagonist of the Conviction Arc in Berserk, hindering, with his excessive religious zeal, Guts' efforts in saving Casca. His symbol was four torture wheels, embodying his willingness to use torture as a way to cleanse people from evil.

He was voiced by Rikiya Koyama in both the 2016 Berserk anime and Berserk Musou video game.

Mozgus was a tall, muscular, and strong man, his most distinguishing feature was his smooth, almost flat face. During his prayers, and whenever he was angry, his face became swollen with veins and he took on a much more intimidating appearance

Mozgus was an extremely devout man, completely dedicated to the Holy See and an ardent follower of "God". He greatly emphasized his religion in everything he did and acted with great zeal in his quest to purge the world of "heretics". Mozgus was also somewhat sadistic and cruel, as he greatly enjoyed torturing others and reveling in their pain for the sake of "purifying" their beings.

Prior to the events told in the Conviction Arc, Mozgus was a zealous Inquisitor, acting on behalf of the Holy See. There, he recruited a small group of marginalized, disfigured individuals, comforting them by reading parts of the Holy See Doctrine, meant to reassure them that even their disfigurements were meant to be worn with pride as a gift from God, and training them in his particular brand of torture, vicious and rarely leading its survivors to walk away without serious wounds.

He is then sent to St. Albion to root out heretics on the behalf of the Holy See, requesting the Holy Iron Chain Knights as his personal guard. Albeit a true heretical group is brewing in the mountains surrounding St. Albion, based on orgiastic rituals, Mozgus himself apparently does little to stop them, managing to capture many of them only by Farnese's intervention. Instead, he sets every bit of his attention towards smothering in blood and torture the rebellions of the poor and starving population of St. Albion against the tyrannical rule of the Holy See. Mozgus sees such acts of defiance against himself as defiance against God, whose rule he's meant to embody.

Physically tall and strong, harsh and demanding with everyone, even himself, he impresses Farnese by smothering several rebellions with threat of death and torture, sparing only a young mother asking more food for her starving child. Though Mozgus does give the child food and medical attention, he sentences the woman to torture with a tearful prayer that she survive the "test" that God has prepared for her, and attempting to use the encounter as a lesson to Farnese about the harshness of God's doctrine.

Upon capturing Casca, who is mistaken as a witch by the local heretics and priests alike, he realizes how the recent accounts of the Black Swordsman may be related to the mute, amnesiac brand girl, so, as usual, tries to torture her as a way to get some more information. Instead, he merely triggers the appearance of a huge band of demons, attracted by the Tower itself, which had been chosen for the Incarnation Ceremony, and the presence of the Brand. Mozgus doesn't flinch at all, instead closing himself in the chapel of the Tower of Rebirth, where the Egg-Shaped Apostle uses his venom to turn Mozgus and his servants into Apostle Spawns with angelic features, as a way to hasten the Incarnation Ceremony.

Without ever knowing what befell him, Mozgus believes that his angelic wings, his increased stamina, and the growing of a scaly hide able to withstand blows from the Dragonslayer and Guts' arm cannon were gifts from God, and decides, as a way to stop the Ceremony and quell the population's fears, to burn Casca at the stake, forcing Guts to come out.

After an heated battle against his mutated servants, Guts himself is almost defeated by Mozgus, until he manages to drive his sword into the only weak spot in Mozgus's hide: a small, weaker plate with the Holy See insignia, a representation of the Holy Book he always brings with him. Shortly after his death, the Incarnation Ceremony is completed, with Griffith's rebirth and the total destruction of St. Albion. 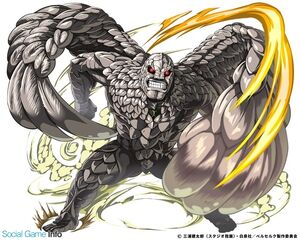