Bragging to each other about how cruel their plans are.

Spending their times shopping or texting on the phone instead of focusing on essential things.

Make the life of Blythe Baxter miserable and uncomfortable.

Scheming, Spoiled Twins
Whittany and Brittany Biskit, also known as the Biskit Twins, are the two main antagonists of the 2012 revival of the Littlest Pet Shop cartoon, and they are extremely vicious twins who are consistently described as "mean" and display the traits of both spoiled children, schoolyard bullies and even mild psychotics. They are Blythe Baxter's archenemies.

They are also the daughters of Fisher Biskit, the owner of the Largest Ever Pet Shop, which is seen as a very inhuman place by the pets and greatly reviled, though he is quite a successful businessman in the human world.

Like many spoiled bullies, Whittany and Brittany are petty but also quite dimwitted; as such their plans are often ill-conceived or doomed to failure, however, they do not seem to learn from these mistakes and continue their attempts to humiliate the main cast, largely out of spite after their somewhat rude attempts at "befriending" the main protagonist was resisted, sparking an intense anger as the twins were not used to anyone saying no to them and reacted much like a malignant narcissist would in seeking revenge for what they saw as a grave insult to their personal pride.

They are voiced by Shannon Chan-Kent.

Whittany and Brittany are two spoiled and rude teenage twins. When Blythe first came to town, they tried to genuinely be nice to her, but they also took the time to criticize her and her ideas as they honestly didn't seem to like them. As a result, she refused to go shopping with them, which made them angry considering the fact nobody has ever told them no before. They tried again later, but once again had criticized her and commented on her friends and fashion. Since then, they have become Blythe's rivals instead and try to do anything they can to either ruin her plans or shut down the Littlest Pet Shop.

Unfortunately for them, they are partially smart, and as a result, their plans often fail or mess up. Whittany seems to be the smarter one of the two however, as she comes up with the majority of their plans, where as Brittany tends to space out on occasion. However, in "Door-Jammed" it is implied that Whittany may be more accepting of Blythe, but often treats her badly because Brittany strongly dislikes her. This may indicate that Brittany is actually the more malicious of the two, or may of been a ploy by Whittany to avoid an awkward situation with Blythe whilst remaining trapped in her bathroom. However, Whittany later reveals an equally genuine dislike for Blythe as much as Brittany in the show. Britney is however sometimes shown to be quicker to insult or degrade someone before Whitney does, such as being the first of the twins to insult Sue in the department store in "Penny for your Laughs", and the first to approach Blythe on the street in "Door-Jammed", also managing to be the first to insult her during that confrontation. Both seem to get in trouble often, as during the first episode their dad reminds them to try not to get expelled from school. The two seem to be under the impression that many people like them and want to be their friends. Despite this, they don't appear to have any.

The twins appear to have a very distant or shallow relationship with their father, as the two have been shown to not even know what a parent is or what they're supposed to do. Their father is shown numerous times trying to teach the twins lessons of hard work and trying your best, however the twins seen too apathetic to care for the most part.

They are so mean that even the pets at LPS show hostility towards them, like in the second part of the pilot, "Blythe's Big Adventure: Part Two", where Russell prevents them from ruining the pet fashion show.

In "Trading Places", Russell gets mad when he overhears them insulting Blythe and him.

In "What's in the Batter?", Sunil expresses his anger towards them by wanting the pets to form an angry mob to attack them after he and the pets witness the twins being rude to Blythe.

Their hostility towards them becomes major in "Bakers and Fakers", where they stop them from cheating in the baking competition after they stole Blythe and her friend's recipe and design card.

As they are twins, Brittany and Whittany look almost exactly alike other then minor details. Both twins have fair-pale skin and bright pink-red eyes with what seems to be just a bit of eyeshadow and dark lipstick. Whittany has black hair with her longer bangs on the left worn with bright pink hairclips, while Brittany wears her white hair with the bangs to the right, with dark purple-pink clips.

The twins' most common attire consists of school oriented uniforms but with minor differences. Whittany wears a dark berry-pink colored jacket with darker pink at the neck and cuffs. A small icon is on the chest, matching the yellow tie worn with the pale blue undershirt. Her skirt is a darker shade with light pink, yellow, and pale pink line detailing. She also wears below the knee dark pink socks, lighter pink boots, and gold bracelets and jewelry.

Brittany wears a dark pink top with lighter pink cuffs and neck, along with an icon on the chest matching her tie and pale blue undershirt. Her skirt is light pink with pale pink, dark pink, and yellow line detailing. She does not wear socks like Whittany does, instead she wears dark pink leggings and almost black colored boots. Her jewelry is gold, pink, and black.

The twins are often seen sporting punk/gothic symbols and designs within their own outfits and accessories, such as the studded leather bracelets they wear with their main school uniforms and other outfits, the dog collar necklaces, studded belts and Whitney's and Britney's leggings with the Skulls and Cat heads printed on the sides respectively in "Penny for your Laughs", the Large Skull and Crossbones on the satchel the twins use to carry the flyers in "Door-Jammed", as well as their own hairstyles, consisting of the long fringe parted to one side covering the eyes to be a typical "emo" hairstyle.

in Feud for Thought episode they proudly admit they aren't smart, as they find smart kids repulsive, so they get F grades on purpose to uphold their reputation. They find studying, learning or any work in general disgusting. They don't even like hearing someone say the word "work". Despite that, in Books and Covers episode shows that the two are Algebra geniuses, but only if they work it out in a secret code that only they understand. 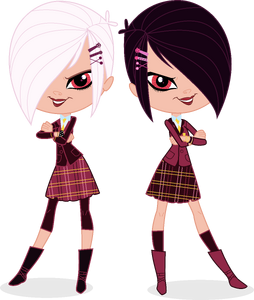 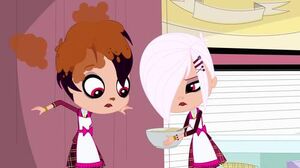 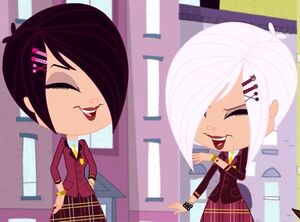 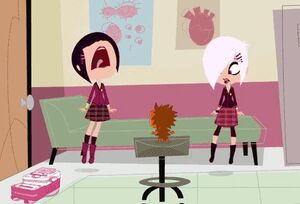 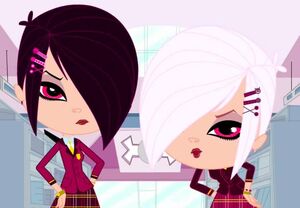 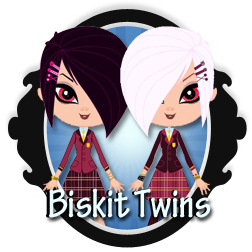 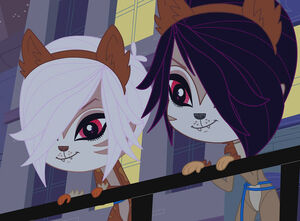 Wittany and Brittany in their cat costumes. 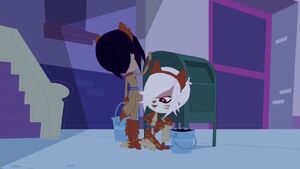 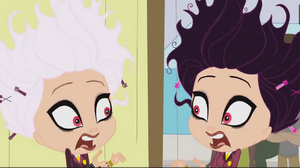 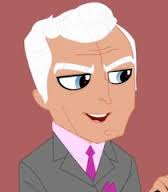