To make spirits slaves and for the world meant for mankind alone (as revenge for his wife being killed).
To save all of humanity

Bisley Karcsi Bakur (ビズリー・カルシ・バクー, Bizurii Karushi Bakuu), also called Bisley is the main antagonist and second final boss in Tales of Xillia 2. He was a man that acted as the CEO of the famed megacorporation called Spirius Corporation (also once known as Clanspia Inc.). that wanted to make the world meant for humans alone and to make spirits into "tools" for mankind out of revage for his wife being killed by Chronos and to stop Chronos from killing all humans.

Throughout the game, Bisley was shown to be a friendly boss towards Ludger. However, after the five waymarkers were found and organized into a star, Bisley goes down to extremes into defeating Chronos; by living with Elle out of her own free will and keeping Ludger and his friends guarded inside the Spirius building to keep them safe by Rideaux as part of his promise to Elle. At the Land of Cannan, after Bisley stabs Chronos, he engages Ludger in the second final battle. At one point, he tells them that the only way to save Elle from turning into a catalyst, he or Ludger would've had to transform in order for the number to reach 1 million, which would stop all future transformations. After the final battle, Bisley wished for Origin to be knocked out by his fist out of revenge for his wife being killed, but this causes him to die instead. In the end, this allows Ludger to make his dream come true, and even after killing himself, this stopped Bisley turning into a divergence catalyst. 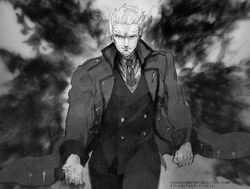 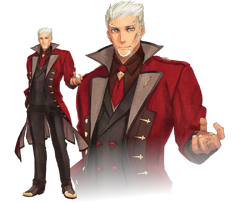 Retrieved from "https://villains.fandom.com/wiki/Bisley_Karcsi_Bakur?oldid=2371697"
Community content is available under CC-BY-SA unless otherwise noted.