Bizarnage is a villain from the Marvel and DC comics mash-up Amalgam. He is a cross between DC's Bizarro and Marvel's Carnage.

Bizarnage was made through a botched experiment at Project Cadmus in an attempt to replicate alien DNA. The white, goopy creature they created went crazy and began destroying everything and everyone in its way.

Then Spider-Boy (a combination of Spider-Man and Superboy) arrived and battled him. Bizarnage wanted to be Spider-Boy, so he tried insanely to kill him, but was eventually defeated by getting tricked by Spider-Boy and sucked into an energy containment unit.

Bizarnage was a symbiotic alien monster who could graft himself into another being. He possessed most of the powers of Carnage, including clay-like shape-shifting, super strength, and deadly claws. 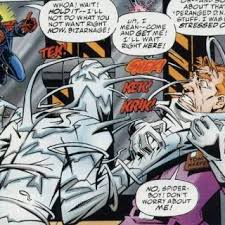 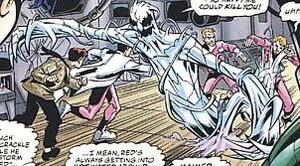 Retrieved from "https://villains.fandom.com/wiki/Bizarnage?oldid=3700791"
Community content is available under CC-BY-SA unless otherwise noted.