Bizarra is a villainous and imperfect clone of Wonder Woman.

Bizarra was captured by Metallo who wanted to rule all over the Bizarro world but was freed by Bizarro. Bizarro explains that Bizarra started out as a beautiful baby who turned into an ugly clay statue.

When Bizarro III found himself infused with radiation from a blue sun, he developed the ability to replicate himself as well as create other "Bizarro" lifeforms based upon likenesses of people from Earth. He used this power to populate a cube-shaped planetoid dubbed Bizarro World within the blue sun star system. One of the many duplicates that he created was a Bizarro version of Wonder Woman. Bizarro Wonder Woman, working alongside her Bizarro confederates Batman, Flash, Green Lantern and Hawkgirl, sought to save Bizarro from Bizarro Doomsday by dropping their hyperbolic headquarters on top of him.

Three months later, the citizens of Bizarro World learned of Bizarro Clark's true identity and Bizarro returned to Earth to seek guidance from Superman's adopted father Jonathan Kent. He broke into the Kent home, abducted Jonathan and brought him back to the Bizarro World where he encased him inside of a crystal chamber. Superman soon learned of the kidnapping and traced Bizarro's path back to Bizarro World.

Bizarra was touted in an episode of The Super Powers Team: Galactic Guardians voiced by actress B.J. Ward, who also voiced Wonder Woman. Bizarro decides that his world of Bizarros needs more heroes than just Bizarro Supermen. He takes a duplicator ray to Earth and makes Bizarro duplicates of Wonder Woman (referred to as Bizarro Wonder Woman), Firestorm and Cyborg. Planning on taking them back to protect Bizarro World, Mister Mxyzptlk convinces Bizarro to train his new friends on Earth, which causes havoc for the real Super Powers Team. 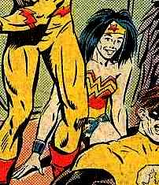 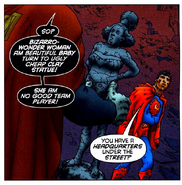 As seen in All-Star Superman 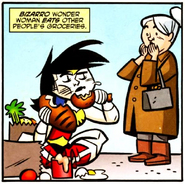 As seen in DC Super Friends

As seen in the Super Friends TV series