NOTE: This article is about the incarnation of Bizarro from the Arrowverse. The mainstream version can be found here: Bizarro.

Skills of a kryptonian but reversed to Kara's abilities:

Bizarro is an antagonist in the first season of the superhero TV series, Supergirl. She is a perfect doppelganger of Supergirl, created by Maxwell Lord to defeat the Girl of Steel. While battling her, Bizarro becomes disfigured and gains opposite powers to Supergirl.

In order to be able to kill Supergirl, Maxwell Lord has brain trauma patients with zero chance of recovery delivered to his laboratory where he alters their DNA to turn them into a mirror version of Supergirl, albeit under his control. Six of the experiments are failures, but the seventh woman delivered to him is more promising. Lord approaches her comatose body, promising to help her, and she awakes from her coma with solid black eyes. It is later shown that this girl is turned into Supergirl's form, albeit with disappearing black eyes, and given Kryptonian powers, with heat vision and and super breath being flipped to freeze vision and fire breath. Lord later reveals that he did this by using some of Supergirl'S DNA which he got from the arm of Red Tornado. During the process, D.E.O. director Hank Henshaw breaks into Lord's laboratory and finds the woman, but is unable to save or help her as she is still comatose.

After succeeding in the creation of his own Supergirl, Lord grooms her into starting to hate the real Supergirl, claiming that she is evil. The false Supergirl, named Bizarro by the media, attacks Kara when she is about to save a group of civillians, but stops when she realizes that Supergirl is saving the people. Bizarro returns to Lord, claiming that Supergirl is not as bad as Lord claimed, as she was helping people. Lord convinces her that sometimes, things that seem to be good are in truth very bad.

Bizarro eventually attacks Kara in her human disguise during Kara's date with Cat Grant's son. She drags Kara to a abandoned cliff outside the city where the two Supergirl's engage in a battle. Kara, who is convinced that Kara is no villain but a victim, tries to reason with Bizarro who does not react at all. D.E.O. agents soon appear, starting to fire their kryptonite bullets at Bizarro. The kryptonite somehow degrades her and disfigures her face. After loudly exclaiming her hate for Kara, she flies off again. She returns to Lord, who tells her that Supergirl made her a monster and, would he be in her place, that he'd kill everyone Supergirl loves. To do so, Bizarro kidnaps James Olsen. She brings him to an abandoned warehouse to lure in Kara. While there, Olsen manages to alert Supergirl. With a formula created by the D.E.O. which is the exact opposite to green kryptonite, Kara heads to the warehouse and engages into a fight with Bizarro. While the fight distracts Bizarro, Alex shoots the substance at Bizarro who falls to the ground immediately. The wounded Bizarro is brought to the D.E.O. where she apologizes to Supergirl before she is put into artificial coma until the D.E.O. can find a way to save her. Supergirl seemed upset over it and felt bad for Bizzaro.

It is presumed she is still in the coma, because when the Red Daughter attacked the white house, Alex Danvers said she checked to see if it was Bizzaro. 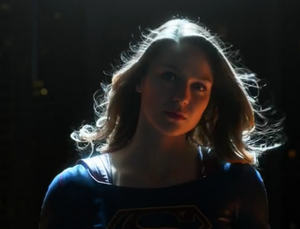 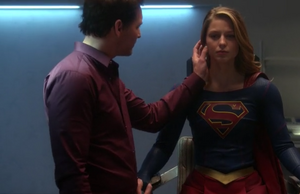 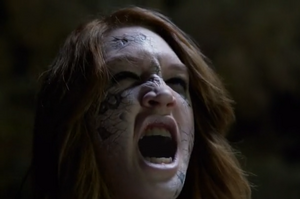 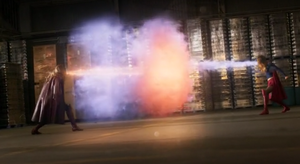 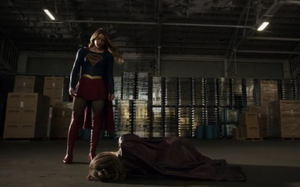