Chairman of the Provisional Supreme Council

Get revenge on Aoba (failed)

Bizon Gerafil (in Japanese: ビゾン・ジェラフィル, Bizon Jerafiru ) is the main antagonist of Buddy Complex. He is a First Lieutenant, Junior Grade-ranked pilot in the Zogilian Republic.

Bizon is generally calm, confident, and loyal. He, along with his Valiancer unit, are fully devoted to the Zogilia Republic and its cause. Towards his companions, he has shown genuine care for their well-being and sacrifices. In spite his rank, he is not above the chain of command, as he does what he is told. Nevertheless, he is also not so close-minded when it comes to decisions he disagrees with.

When in battle, however, Bizon becomes very arrogant in his and his teams abilities. He has no problem insulting or directly attacking his enemies He also leads his team directly into battle, with a tactical mind and without any worry for the opposition's abilities.

Because he was a childhood friend of Hina, he is determined to take down the white Coupling Valiancer for all the problems it caused to her. Upon recognizing Aoba as the pilot of the new-type he absolutely wanted to kill him, he even brushed away Hina because she would not move from his range. He has been extremely irritated to not be able to kill Aoba when the occasion came twice. He has shown to be very protective to Hina, especially when Aoba is concerned. It was revealed he loves her. His hatred for Aoba becomes obsessive as Hina showed interest in him.

After Bizon changed his name and became chairman, his personality became very crazed and vengeful; he was willing to sacrifice anyone and anybody to get his revenge. He was even willing to commit suicide and destroy the Earth to get his revenge. Aoba mentions Bizon was also very prideful; all his actions were to protect his ego and pride.

Bizon was a close friend of Hina Yumihara since childhood. The two have been friends in the Zogilian military for a long time, and he has developed feelings for her.

He was deployed as a leader of the assault team to capture the XV-7001 Luxon and XV-7002 Bradyon Valiancers. At the moment his team had the high ground, Aoba Watase ended up in the cockpit of the Luxon, and coupled with Dio Junyou Weiberg's Bradyon. Their combined power turned the tables against Bizon's attack force, forcing them into retreat to the mothership, the Trident, where Bizon and his comrades were addressed and reassured by Lieutenant Colonel Alfred Gallant that there was still a chance to capture the new Valiancers and defeat their enemy once and for all.

Bizon is among the attack force targeting the Cygnus and attempting to capture the new Valiancers a second time. With their tactics, his squad was able to handle the Cygnus's Valiancer team, until Aoba sortied in his Luxon. Joining Dio and the rest of the Valiancer team, Aoba was able to help his team hold off Bizon's squad. When he noticed Aoba trying to establish contact with Hina, Bizon aggressively set his course to Aoba, only to get obstructed by Lee Conrad. After Aoba gets attacked by Hina after a failed attempt to try and reunite with her, Bizon then helps her retreat with the rest of the attack force.

Aoba was Bizon's primary rival. Because of her interest in the former, Bizon has harbored vendetta against Aoba. Over time, Bizon's hatred towards Aoba would grow, because of the latter's interference in the former's plans. Even for 70 years, he still greatly despised Aoba.

The two were childhood friends and have been friends during their times in the Zogilian Military. He has developed romantic, though unreciprocated, feelings for Hina. Because of his interest in her, he developed envy towards Aoba for being her the target of her interest. 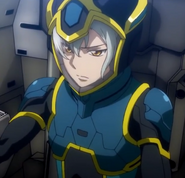 Retrieved from "https://villains.fandom.com/wiki/Bizon_Gerafil?oldid=3971965"
Community content is available under CC-BY-SA unless otherwise noted.