Help Superman rule the world at all costs.

Defeat the Insurgency and anyone who stands in the way (both failed).
Defeat Brainiac (succeeded).
Help Superman restore the Regime (in Batman ending, failed, in Superman ending, succeded).

Like most incarnations of the character, he is the former wizard champion Shazam that was corrupted by its power and the ruler of Kahndaq, but he joined Superman's One-Earth Government regime because it resembles his own government. He is classified as a Power User and uses magical powers derived from the Gods of Ancient Egypt.

He was voiced by Joey Naber, who also voiced Shazam in the same franchise.

Teth-Adam was raised as the son of the legendary Ramesses II. When he reached adulthood, he approached the wizard known as Shazam, where he was given the powers of the Egyptian Gods (the representatives being Shu, Heru, Amon, Zehuti, Aton, and Mehen.) This gives him the ability to harness them upon saying the magic word "SHAZAM!" Since then, Adam lived within his new form to maintain immortality, going on to rule his own country, Kahndaq. Adam has also used his powers for evil, but only to defend his country. To the chagrin of Shazam, he contacted his new apprentices, the Marvel Family (led by Billy Batson as Shazam) to stop Adam's evil ways. This ended up resulting in a lifelong rivalry between the two, spanning multiple years.

Black Adam fought several members of the Justice League in Kahndaq after a country fired a shell into his domain. In a frenzy, Black Adam went on a killing rampage and destroyed the town he believed the shell was fired from. He ripped off Cyborg's arm before being apprehended by Wonder Woman and Superman. Diana bound Teth-Adam with her Lasso of Truth in order to ask Adam if there was a way for him to stop killing people. Adam said that nothing will stop him, and told Shazam that he was choosing the same path as Adam: he will bring peace to his world through fear. Diana forced Adam to say his magic word, Shazam!, changing him back into Teth-Adam. He survived the transformation, but cannot speak his word to change back to Black Adam after Diana covered his mouth.

Black Adam appears alongside the alternate Wonder Woman to confront the duplicates of their Green Lantern, Green Arrow, Aquaman and Diana in the Batcave as they attempt to retrieve a kryptonite based weapon to subdue Superman. Adam tackles the duplicate Wonder Woman when she briefly lets her guard down at the sight of her doppelganger. When the Insurgents brought Black Adam to the ground, he unleashed a lightning shockwave leaving only Oliver standing. Ollie proceeded to defeat Adam, and he left the base.

Much later, Adam appears alongside Superman and his gathered forces to battle Batman's Insurgency at Stryker's. During the battle, he works with Hawkgirl to attack the duplicate Green Lantern but chooses to chase after Lex Luthor when he reveals his betrayal. Adam is knocked unconscious by one of Luthor's missiles during their chase, and falls onto a nearby sidewalk.

Black Adam next appears in Superman's Fortress of Solitude, proclaiming anarchy cannot be allowed to spread when he learns of the people's insurrection. Adam is called to Superman's side when the Man of Steel declares his intentions to attack Metropolis and Gotham. Adam watches Superman murder Shazam.

Black Adam is next seen attacking Gotham, and is about to crush Aquaman under a car when the duplicate Superman intervenes. Though Clark tries persuade Adam to return to Kahndaq, Black Adam chooses to attack Superman instead, even lobbing cars at him. Despite his claims of equaling Superman's strength, Black Adam is defeated and frozen in place by Clark's freeze breath.

Black Adam is immune from prosecution when the Regime fell, allowing him to bide his time, rescue Wonder Woman from Themyscira, and train Supergirl, a Kryptonian he found conserved in her space ship, away from the prying eyes of Batman. This isolation also allowed Adam and Wonder Woman to hide Superman's crimes from Supergirl so it would be easier to turn her against his enemies.

Black Adam watches Brainiac's ship enter Earth's atmosphere using his crystal ball, only for Supergirl, terrified of the ship, to demand they go find Superman immediately. During Brainiac's invasion, Black Adam enters the Red Sun Prison with the fallen members of the Regime, hovering over the pro-Regime protesters outside the prison. Adam sabotages the prison generators with his lightning bolt before Blue Beetle and Firestorm confront him at the Power Center and knock him out. He recovers in time to join Wonder Woman, Supergirl, Cyborg, and Damian Wayne in charging Superman's cell.

As soon as Superman restores his powers in his Fortress, Adam requests to be allowed to return to Kahndaq before Brainiac locates him despite his magical protection. He leaves the room so Superman can talk to Supergirl in private, only to blast her with lightning minutes later to stop her from escaping the Fortress and the Regime. She angrily accuses him of lying to her about the evil of the Regime, which Adam dismisses out of his belief that evil is decided by those with power.

Supergirl defeats Black Adam and then her cousin, but further conflict is interrupted by the acceleration of Brainiac's attacks on Earth. Scared for his homeland, Black Adam speaks urgently about the need to return to Kahndaq.

After the alleged death of Superman, Black Adam flies to Metropolis alongside Wonder Woman to meet with Batman and the other heroes. With all scientific options exhausted. Adam forwards that a magical solution may be needed to solve the problem of Brainiac's invincibility. With help from Aquaman, Adam formulates a plan to channel the Rock of Eternity's magic into the Trident of Poseidon and strike down Brainiac's shields, opening him up to normal attack.

Aquaman and Adam arrive in Kahndaq to open the gateway to the Rock of Eternity through a powerful release of magical energy, alerting Brainiac to Kahndaq's location. By the time the gate is fully open, Brainiac has already sent two brainwashed heroes (Green Arrow and Black Canary), a horde of gorillas, and a spaceship to stop the two monarchs and devastate Kahndaq. The monarchs subdue Brainiac's forces and are surprised to reunite with Blue Beetle, who is revealed to be a puppet of Gorilla Grood when he attacks Adam the second he starts channeling the Rock of Eternity's magics. The kings beat Beetle and kill Gorilla Grodd.

Black Adam, with little time to spare, sits in front of the Rock of Eternity and surrounds himself with electrical magic, before invoking the magic of "Shazam" and shouting a wave of magical lightning into Aquaman's trident, leaving him vulnerable to Brainiac for the first time.

After Brainiac's defeat at the hands of both Superman and Batman, Black Adam sides with Superman once more, believing he can control the ship. Adam grabs Supergirl from behind and pulls her away from her cousin before she can help Green Lantern in his battle with him. Adam smiles as he pumps two streams of electricity at Supergirl, before turning his hand to fire one of the streams at Batman and board the mortal off the ship. He dangles Batman above Gotham City before letting him drop to the concrete. Unwilling to surrender, Adam engages in a losing battle with Batman and is defeated, making him vulnerable to prosecution in America.

Black Adam possesses superhuman strength, speed, stamina and invulnerability on par with Superman himself, as well as the power of flight and a significant ability in magical manipulation, as Adam is capable of using his magic beam in various ways other than those of that Billy can make, shaping him into lightning bolts that he can conjure from his hands, orbs for protection or throwing, he can even shape him into a cage around him that he can transform into a larger lightning bolt. 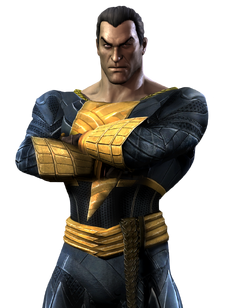 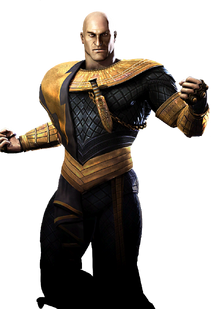 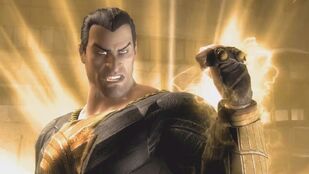 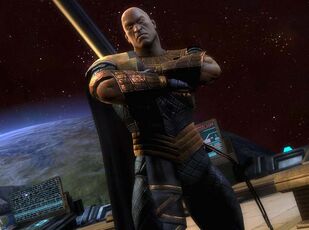 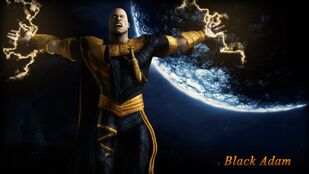 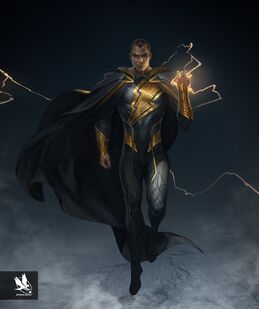 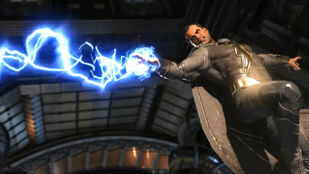 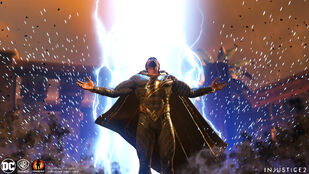 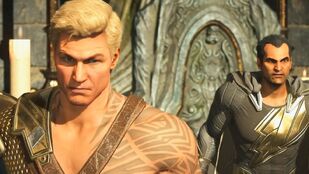 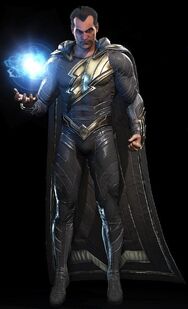 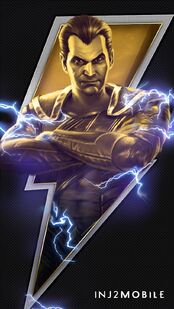