The Black Beast of Argh (also known as Black Beast Of Caerbannog) is a minor antagonist in the 1975 satirical film Monty Python and the Holy Grail.

His vocal sound effects were provided by Ian Crafford.

He is a legendary beast who awaits and consumes anyone who enters the cave guarded by the Rabbit of Caerbannog, where the last words of Joseph of Arimathea can be found carved inside. He is briefly seen when he is revealing his face on a cave that King Arthur and his Knights of the Round Table pass during the journey for an enchanter that will guide them for the cave that guarded by Rabbit of Caerbannog.

As the horrendous black beast lunges forward, escape for Arthur and his gang seems hopeless, when suddenly, the Animator suffers a fatal heart attack. Upon such narration, the scene switches to an animator who keels over and falls to the ground dead, and as Arthur and his gang escape, the beast stops and dissolves, ceasing to exist. The cartoon peril is no more. The quest for the Holy Grail now continues.

The monster obviously behaves much like other terrifying man-eating monsters such as Dinocroc or Supergator, where all of them are relentless in the pursuit for their prey, particularly humans. It is unknown whether he also rivaled the Rabbit of Caerbannog or not considering the fact that they are man-eating beasts.

The beast's appearance is obviously reptilian, albeit only having two legs, with numerous eyes and teeth, brown hair on his head, and a pair of horns. Though the depiction supposedly showed him as a terrifying black beast, he instead is depicted as a hilariously ugly green monster. 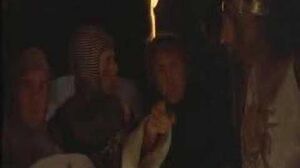 Monty Python and the Holy Grail black beast of Arrrggghhh
Community content is available under CC-BY-SA unless otherwise noted.
Advertisement