Stop the Zombie Plague and save humanity (failed).

Continue using the cloning technology for food supply (succeeded for a while).

Blackagar Boltagon, also known as Black Bolt, is a recurring antagonist in Marvel Zombies. He along with many other heroes became a flesh-eating zombie after a zombified Sentry appeared and caused the Zombie Plague.

Little is known about Black Bolt's life before the zombie plague occurs on Earth-2149, but it can be presumed is most likely the same as his Earth-616 counterpart.

While the infection has started to spread, Black Bolt received a call from Nick Fury to join the resistance aboard the S.H.I.E.L.D. Helicarrier, planning a strategy to stop the plague. Fury tells the remain uninfected heroes it looks like the of the world and everyone should be on the same team.

Black Bolt, along with other heroes returns to the surface and tries to kill the zombies. Sadly, he and other heroes are overwhelmed and turned. After Beast and Mr. Fantastic found the remain humans in Latveria and the surrounding area, Black Bolt and a huge horde of infected heroes head off to get inside of Castle Doomstadt.

While trying to break through the magical defenses, Black Bolt and the other zombified heroes are surrounded by the re-animated corpses of the Deadite Legion. However, the reanimated corpses were unable to defeat the horde as they still had their abilities.

When Earth-1610 Reed arrived on Earth-2149 and meets Magneto, Black Bolt and the other zombified heroes found them. Trying to capture the living flesh, Black Bolt is presumably blinded by Earth-1610 Invisible Woman when the Fantastic Four and Magneto flee, with a surviving pocket of humanity, heading to the Baxter Building to use the teleportation machine in order to transports to the Ultimate Universe. Later, Black Bolt is seen with the others, waiting for other zombified heroes to come back after trying to devour Magneto.

Black Bolt and the others look up to see Silver Surfer, quickly flying up to catch him. They manage to catch the silver stranger, only for them to be knocked away by the Hulk, trying to eat the Silver Surfer but fails to try to devour him. Afterward, Colonel America, Luke Cage, Wolverine, Hulk, Giant Man, Spider-Man and Iron Man were able to devour Silver Surfer and got cosmic powers, they tested out their new abilities and fried the zombies, but Black Bolt was able to survive from them.

At some point, after the Zombie Galacti group left Earth, Black Bolt formed an alliance with the crime lord Kingpin. The partial necrosis of his vocal cords had left him capable of speech and possibly unable to generate quasi-sonic screams, and also he was in fact extremely verbose, much to annoy Kingpin. After their cloning technology was destroyed by Machine Man, Dr. Strange summoned manna in trying to sustain the others. While eating and showing disgust at the taste, he tries to ask Kingpin about it, only to see him devouring his wife, falling into depression.

Hulk was banished to another planet by Black Bolt and other members of the Illuminati. However, he and Medusa along with other Inhumans were infected by Giant Man and attacked Hulk and the Warbound when they traveled to Attilan to exact revenge against the members of the Illuminati. His fate is unknown, but he was presumably was killed in previous battles that led to humanity's extinction in his reality.

Black Bolt along with other zombified heroes are seen attacking Screw Ball and his friends and later fights the Marvel Apes. His fate is left unknown. 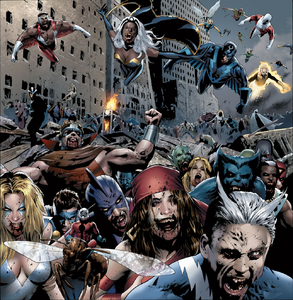 Black Bolt and other zombified heroes chasing after survivors. 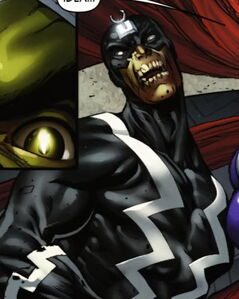 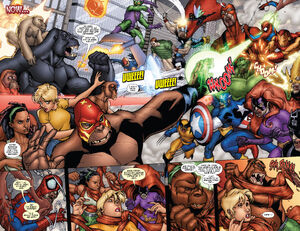 The Earth-21050 zombified heroes and villains attacking Speedball and his group.