Leader of the Black Cross Army

Dominate the world.
Destroy all of the Super Sentai.

He is a mysterious figure who is the mastermind behind the Black Cross Army's attacks, drawing a cult-like reverence from his followers. He possessed a vast array of powers and was known as the "Machine Monster" for his seemingly invincible nature. His true identity was not known, even among his highest-ranking generals, and he would adopt several forms throughout the series. Ultimately, the Black Cross Führer would be revealed in the final episode to not even be human, but instead a sentient alien machine construct whose true form was the Black Cross Army's flying headquarters, the Black Cross Castle.

Despite his defeat at the end of the series, the Black Cross Führer eventually returns as the main antagonist of Gokaiger Goseiger Hero 199 Great Battle, now going by the name the Black Cross King, where he returns from Hell to get his revenge against the Super Sentai and brings back Brajira of the Messiah, Yogoshimacritein and Hades God Dagon as his servants in a revived Black Cross Army. He also formed an alliance with the Space Empire Zangyack to ensure they would not get in the way. At the end of the movie, the Black Cross King unveiled his ultimate form, a gigantic dragon-like monster known as the Black Cross Colossus.

In Himitsu Sentai Gorenger, he was portrayed by Mitsuo Ando and Nobuo Yana. In his return in Gokaiger Goseiger Hero 199 Great Battle, he was voiced by Akira Kamiya.

The Black Cross Fuhrer led the Black Cross Army in subversive campaigns all across the world in order to subvert the existing powers so the Black Cross Army could take control. When the EAGLE defense group opposed his plans, the Fuhrer sent five of his Masked Monsters to each destroy a different EAGLE base and massacre everyone inside.

In spite of the Gorengers' continued interference, the Black Cross Army's campaign of terror continued on. However, things changed when the stars aligned with the Cassiopeia constellation, causing the Führer to become weakened by cosmic rays from Cassiopeia. Unperturbed by this, the Fuhrer ignored the advice of his right hand man Commander-in-Chief Golden Mask and face the Gorangers himself to prove that he could overturn destiny, ordering that a challenge be issued to them for them to come and battle him. The Gorengers arrived at the scheduled spot for the confrontation, and the Fuhrer ordered that his men not interfere in the battle, choosing to take on all five Gorengers himself. In the fight, the Führer was able to overpower all five Gorengers and deliver a decisive defeat to the team. After incapacitating the team with his "Black Cross Spark" attack to the Gorengers, the Black Cross Fuhrer had Golden Mask bring him the Black Cross Sword so he could use it to deliver the killing blow. As the Fuhrer attempted to stab Akaranger however, he was suddenly weakened by the Cassiopeia constellation. It would turn out the five Gorengers were prophecized to defeat him, with each of their names possessing part of the word "Cassiopeia". While the Fuhrer's minions brought him back to the base Golden Mask faced the five Gorengers, but was overwhelmed by them and defeated. Before dying however, Golden Mask sacrificed himself to transform into a golden rainbow that stretched to and revealed the location of the Gorenger's base. Not concerned with the loss of his second-in-command, the Fuhrer had the Black Cross Castle go on a bombing run to where the Gorenger's base was marked, destroying it and leveling the entire city in the process.

Not willing to give up, Tsuyoshi Kaijo approached the Black Cross Army claiming to want to surrender and deliver a gift to the Fuhrer, but when he was brought inside the base he opened the briefcase carrying the "gift" to reveal a set of lights arranged in the pattern of Cassiopeia, exposing the Fuhrer's weakness to the constellation. For his defiance, the Fuhrer had Kaijo tied up outside and set to be executed, but his teammates showed up and rescued him. After defeating his Zolders, the five Gorengers battled the Fuhrer once more and drove him away with their "Cassiopeia" Five Star. The Fuhrer retreated inside his base, but the Gorengers pursued him there and prepared to finish him off. However, the Fuhrer then revealed himself as an alien machine and assumed his true form as the Black Cross Castle to go on another bombing run. In a final push the Gorengers sacrificed Varidreen to board the Black Cross Castle and rammed their Gorenger Machines into different critical areas of the flying fortress before flying off using their Birdies, causing the Black Cross Castle to explode and putting an end to its reign of terror.

The Fuhrer eventually returned, using the hatred of past defeated Super Sentai villains to revive himself as the Black Cross King. He appeared before Warz Gill and the crew of the Gigant Horse to form an alliance with the Zangyack Empire, telling them that once he destroyed the Super Sentai, Earth would be theirs.

The Black Cross King later appeared before the Goseigers and Gokaigers. He revived three of the Super Sentai's past enemies, Brajira of the Messiah, Yogoshimacritein and Hades God Dagon to defeat the two Sentai teams. After the three were defeated, the King used the Ranger Keys he stole to create an army of past Super Sentai teams to defeat the Gokaigers and Goseigers. When the Keys were also defeated, the King grew giant, but was destroyed when the spirits of past Sentai created the Super Sentai Bazooka and fired it at him.

The Black Cross King eventually returned as a member of Dai-Zangyack. He later appeared as a member of the Shocker-Zangyack Alliance and, in the final battle, he could be seen fighting VulEagle and GingaRed.

After the "Chou Shocker Taisen" stage was triggered in the Game World, the Black Cross King was one of the past villains spawned from the Game World to cause havoc in the real world.

The Black Cross Führer possesses a wide array of abilities. He is highly intelligent and incredibly skilled in both magic and science. He is also capable of altering his form at a whim, including disguising himself as someone of either gender. While normally operating from behind the scenes, the Führer is incredibly strong and skilled in combat, being able to take on and defeat all five Gorengers at once. He also secretly possessed the ability to transform into the Black Cross Army's floating base, the Black Cross Castle.

In Gorenger, the Black Cross Führer was portrayed by Mitsuo Andō from the first episode to episode 55, who also played Professor Gill in Android Kikaider and Führer Geisel in Inazuman Flash. After Mitsuo Andō had to leave the show due to health issues, he was replaced by Nobuo Yana from episode 56 to the finale in episode 84. In the Himitsu Sentai Gorenger: The Bomb Hurricane, his female human form is played by Chiyoko Kazama.

In his return as part of Dai-Zangyack in Kamen Rider × Super Sentai: Super Hero Taisen, he was voiced by Hideyuki Hori, who previously voiced Great Sword Man Zubaan in GoGo Sentai Boukenger and also voicing the King's Black Cross minion, Baseball Mask, in the movie as well. 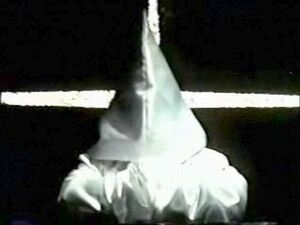 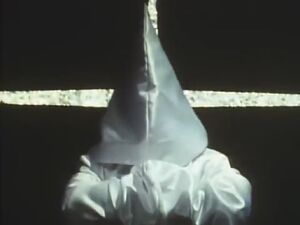 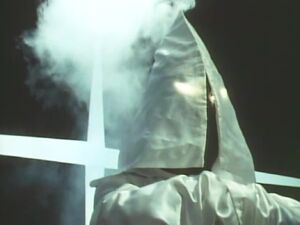 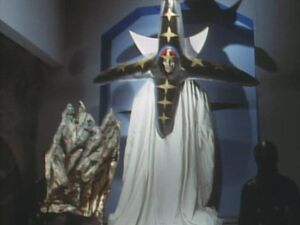 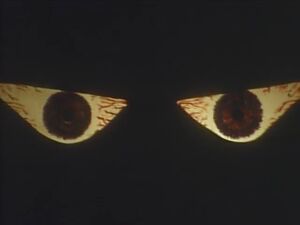 The eyes of the Black Cross Führer seen for a brief moment in episode 37.

The Black Cross Führer in disguise as the "Mysterious Beauty" in Himitsu Sentai Gorenger: The Bomb Hurricane. 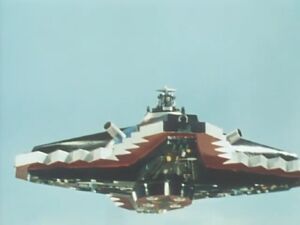 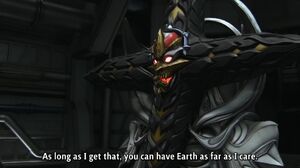 The Black Cross King negotiating with the Zangyack Empire. 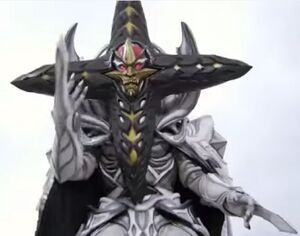 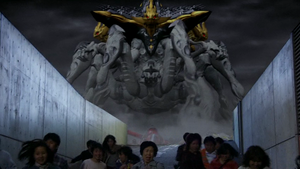 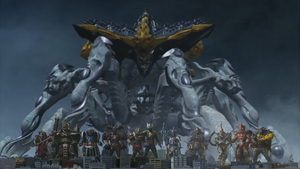 The Black Cross Colossus and his army of revived villains.