Protect and serve the Medicci Mafia.

Female Enforcer
Black Dahlia is a ruthless assassin and the killer of the "Fishbone Gang", and a recurring antagonist in the 2012 indie game Skullgirls. She sliced up Ms. Fortune and left her to die. She is also seen during Peacock's story mode protecting the head of the Medici mafia, Lorenzo Medici.

At least one of her legs is robotic, and her right arm has also been replaced with a giant gun-arm. She's been in the killing business for decades, but beyond that, not much else is known about her. It is suspected that she is quite old, hinted at by her love of doilies.

Black Dahlia, the Medici Mafia's top ranked assassin, has more than enough experience to make up for her age. She killed the entire Fishbone Gang, cut Ms. Fortune to pieces, and put countless other hits under her belt for Vitale. With the younger Cerebella becoming the boss's new favorite, Black Dahlia may be jealous enough to pursue the Skull Heart for her own selfish purposes as a DLC character.

Black Dahlia patiently waits at the Medici Tower stage until Vitale gives her new targets. Although infamous across the Canopy Kingdom, there are no known photographs of Dahlia's true face; she's far too arrogant to show her scars. With no fear of getting caught, she wears her preferred murder weapon as a prosthetic arm and uses it as often as possible to launch a variety of high-caliber round, tear gas canisters, and grenades. She would gun down Noel, Hol Horse, and Chris Redfield just to make a point. Black Dahlia also pioneered the Medici assassin art of fighting with concealed bladed weapons, so there is no telling what other implements she has concealed in that silky dress.

Her name is a reference to the unsolved murder of Elizabeth Short, nicknamed The Black Dahlia.

While B. Dahlia was revealed to be one of the characters that fans could vote on to become a new DLC character, ultimately she was beat out by other characters. For the record, Black Dahlia made it through the first round of voting, but was eliminated in the second. 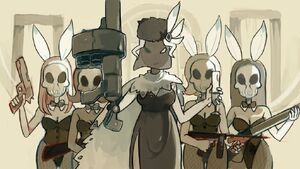 Dahlia's gang on the way to his mission. 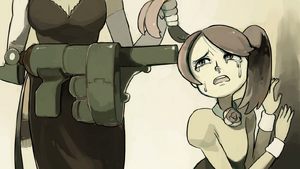 Dahlia prepares for shooting Sienna in the head.
Add a photo to this gallery

Retrieved from "https://villains.fandom.com/wiki/Black_Dahlia?oldid=3698031"
Community content is available under CC-BY-SA unless otherwise noted.