Black Death is an antagonist in Kick-Ass 2. He is a leading member of the group of supervillains known as Toxic-Mega C*nts and personal body guard to their leader, The Mother F**ker.

He was played by Daniel Kaluuya, who also played W'Kabi in Black Panther and Michael Fry in Psychoville.

The Black death comes to be after Chris D'Amico (now the supervillain The Motherfucker) attempts to train and become a better fighter and is severely beaten by his brutal sparring partner. Chris then instead pays the man to work for him who now becomes the supervillain "Black Death". He and many other criminals join the Mother F*cker's gang, becoming one of the following founders and selected as one of the Mother F*cker's personal bodyguards.

Black Death is later seen with the rest of the Toxic-Mega Cunts when they raid Colonel Star and Stripes hideout. He watches as Mother russia brutally snaps the Colonel's neck, Black Death is then, presumably, one of the members responsible for decapitating and defiling the Colonel's body. After this he along with Genghis Carnage, The Tumor and Mother Russia escort The Motherfucker to the house of Kick-Ass's love interest and fellow superhero, Night Bitch. Black death stands guard while The Motherfucker attempts to rape Night Bitch, however the cops show up in force, Black Death and Genghis Carnage watch as Mother russia slaughters all of the unfortunate responding police officers, as both men felt they were not paid as highly as the giant villainess.

He is also present During the final battle at The Motherfucker's evil lair between the Toxic-Mega Cunts and Justice Forever. Black Death is seen as one of the villains guarding The Motherfucker along with Mother Russia. Hit-Girl rushes the trio of villains, Black Death steps in and attempts to kill her. After a brief battle he misses with a punch which is caught by Hit-Girl who then turns his hand around and shoves his own finger through his left eye and into his brain ending his life in seconds. 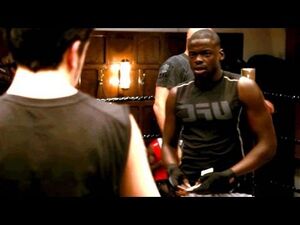 The man that will become "Black Death" after being hired by Chris D'Amico to join the Toxic-Mega Cunts. 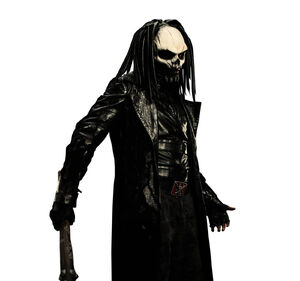 Black Death, with the rest of the Toxic Mega-Cunts raiding Colonel Stars and Stripes hideout.

Guarding his boss in the Villain's lair. 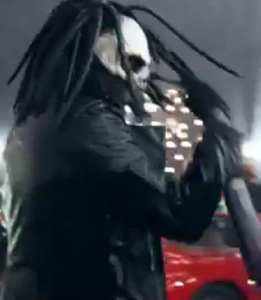 fighting Hit-Girl during the final battle between Heroes and Villains