Leader and hive mind of the Black Arms

Use the Chaos Emeralds to release a gas all over the Earth that will paralyze all non-Black Arms creatures and allow his race to eat the Earth's population.

Coerce Shadow into joining him.
Kill Dr. Eggman and destroy the Eggman Empire.
Kill Shadow the Hedgehog and his allies (all failed).

He is the sinister leader of the Black Arms and the eldest of his species. The Black Arms are Black Doom's own spawn and appear to operate with an insect-like hive intelligence, seemingly preventing any attempts to challenge Black Doom for leadership. He claims that the Black Arms have visited Earth for at least as far back as 2,000 years. It is currently unknown just how much of an effect he has had on Earth's history, although the bird-shaped ruins in Glyphic Canyon and Sky Troops are revealed to be flying temples transported to the planet Earth by Black Doom over two thousand years ago to be used as weapons.

He presents an almost religious front and shows little respect for humanity due to its sins against each other and the planet Earth. In fact, his philosophy is little more than an egotistical justification for his own dark and evil deeds. He wants to enslave the humans (and likely everyone else on the planet) and use them as food for him and his army. He is one of the two creators (alongside Gerald Robotnik) of Shadow the Hedgehog, as well Shadow's biological father and arch-nemesis.

He was voiced by Ryūzaburō Ōtomo in Japanese and Sean Schemmel in English.

Fifty years prior to the game, Black Doom formed a sort of alliance with Gerald Robotnik. He and Gerald created the Ultimate Lifeform, Shadow the Hedgehog, in order to expand Gerald's research and help Black Doom retrieve the Chaos Emeralds. Shadow was created from Black Doom's blood. However, Gerald realized the threat that his new alliance presented to Earth and secretly planned to use Shadow and the newly built Eclipse Cannon to destroy the Black Comet when it made its next regular fifty-year visit. However, soon after the events detailed in Sonic Adventure 2 occurred and Gerald's initial plan was forgotten as he sunk into grief and madness.

Black Doom appears at the beginning of the game as a hologram projected by Doom's Eye (his third eye) to inform Shadow that "the day of reckoning" will soon be here. Black Doom uses Shadow throughout the game in order to retrieve the seven Chaos Emeralds for him. He ordered his army to attack six major cities around the world in search of the emeralds and in order to weaken Earth's defenses. He continuously pressures Shadow to denounce the home he has made on Earth and swear allegiance to the Black Arms and their goals.

Black Doom is often tries to accomplish this by trying to manipulate Shadow into believing that no good can come from the continued existence of humanity, offering to tell him about his past, and even goes so far as to put Shadow into a recreation of what happened to him on the Space Colony ARK to better justify the evil humans are capable of. Black-Doom's plans included the taking of the ARK for his nefarious desires. Once the ARK was taken over by the Black Arms, Black-Doom took control of the Eclipse cannon and used it to destroy Central City. He did this so that it may be used as the site for the Black-Comet to root in with the planet.

When Shadow gains all seven of the Chaos Emeralds, presumably gaining the seventh one by defeating Black Doom at the Black Comet, Black Doom steals them and reveals that he needed them all to amplify his Chaos Control to full power so that he can warp the Black Comet to Earth. The comet's own velocity was not fast enough, and so he needed the Emeralds to perform a mass Chaos Control so that he could root the comet to Earth and use it to unleash a paralyzing nerve gas on the planet's population to make them food for his Black Arms spawn.

Shadow's inherited genetics from Doom makes him the only other creature on the planet capable of resisting the effects of the gas. Retreating to his inner sanctum at the very center of the comet, Black Doom defends himself from his advancing offspring with a perimeter of his most elite Black Arms soldiers, but they were all defeated. When Shadow reaches him, Black Doom finally reveals the truth of Shadow's parentage but is soon after interrupted by a fifty-year-old transmission of Gerald from the Space Colony ARK, accidentally activated by the Chaotix Detective Agency.

The transmission reveals to the world Gerald's secret plan to destroy the Black Comet and gives Shadow the resolve to defeat Black Doom. Before he can attack, Black Doom teleports outside and transforms into his most powerful form - Devil Doom. Shadow uses the left behind Chaos Emeralds to transform into Super Shadow and give chase. The two engage in a final battle in the red sky over the rooted Black Comet. Super Shadow is ultimately able to defeat Devil Doom, sending him tumbling down to the city below. After Devil Doom's death, Super Shadow used Chaos Control to teleport the Black Comet back into Earth's atmosphere and lets the ARK's Eclipse cannon destroy it.

Black Doom is depicted as a highly ruthless, sadistic, manipulative, and power-hungry tyrant. He has a misanthropic view towards humans, believing them to be the cause of the destruction of their own planet. Black Doom never shows any affection nor sympathy towards anybody or anything, including his own army and his creation, Shadow. He gladly took the life of his own army to destroy Central City, said city he had chosen as the site for the Black Comet when it teleported down (via Chaos Control). Black Doom carries the Dark Lord persona and committed horrible atrocities throughout the story, such as attacking six cities and killing millions, torturing the humans and having his army feed off of them.

Doom's plans for Earth extend much further than simply controlling it. His main goal is to take control of the planet and have him and his army feed off the humans, which he states is a great energy source for him. According to Black Doom, once he takes control of the planet, the humans will never see the sun again and the planet will cease to be blue. It seems as though Doom wants to conquer Earth to bring himself a step closer to conquering the entire universe.

While claiming to have Shadow's best interests at heart, Black Doom cares nothing about him and is only interested in his power. He manipulates the black hedgehog into serving him, but Black Doom's evil nature had caused Shadow to see him as the ultimate enemy in the last story. Doom sees Shadow as a gateway to the Chaos Emeralds and believes that his power would make a fine addition to his ranks. Doom often orders Shadow to perform missions that would benefit his cause to overtake the world, such as destroying human data servers so information can't be transferred over among the humans, awakening magic temples to be used as weapons, and even trying to assassinate the President.

Unlike other villains from the Sonic series, Black Doom completely lacks a sense of humor. He was also arrogant and had stated several times that he not only rules the universe, but is the strongest being in the universe as well (as well as claiming to be immortal). His arrogance proved to be his downfall since he left the Chaos Emeralds with Shadow after warping away to transform into Devil Doom. During the battle with Super Shadow, he admits that he has underestimated the Emeralds' power.

Black Doom is fought as the final boss if Shadow completes the hero mission of Final Haunt, Cosmic Fall, or GUN Fortress (however, Black Doom's battle in Final Haunt is presumed to be the canon final battle before Devil Doom). Black Doom attacks with Swift Strike, an energy blade that strikes near the ground and bounces off a surface it hits. This cannot hit Shadow if he is standing on a platform. He can also shoot two fireballs, or five meteors, which can be avoided either by moving or by hiding behind a platform. To damage him, Shadow must either jump onto a platform once Black Doom is done attacking and use a Homing Attack on his head or else grab a gun from a crate and shoot Black Doom in the head with it.

After three Homing Attacks or quite a few gunshots, Black Doom will teleport. This holds true even if Shadow uses Chaos Control to slow time. Black Doom will eventually teleport after several seconds even if Shadow does not attack him, or only gets one or two hits on him. The more damage Black Doom takes, the more he will attack in succession, attacking as often as three times when half of his health is depleted, and four times when he is near defeat.

Black Doom took this form after the truth behind Shadow's creation was revealed. As the Black Comet was invading Earth, Shadow used the Chaos Emeralds to transform into Super Shadow and fought Devil Doom. Once hit with enough Chaos Spears, Devil Doom fell to his death, expressing shock at how a supreme being and immortal life form could be defeated.

To defeat him, Super Shadow must use Chaos Spear on his eye. The best way to do this is to charge Chaos Spear until Shadow says "Chaos", then get near Devil Doom's eye and fire. Whenever it is hit, Doom's Eye will move from one of Devil Doom's two heads to the other. Shadow must find which head has the eye on it and attack it. If any rubble or orbs are between Shadow and Devil Doom, Shadow is likely to attack them instead of him.

Sometimes Devil Doom will teleport using Chaos Control, which he always does if Shadow gets close enough to dash into him. When he reappears, he will often raise rubble. Among the rubble are balloons, which contain rings to help Shadow maintain his Super form. Dashing into him to make him teleport and then raise the rubble with balloons is a good way to obtain more rings if Shadow is running low.

If the fight goes on for long enough, the gas from the Black Comet will enter Earth's atmosphere and paralyze everyone below (though this does not affect the battle, and there does not seem to be a time limit). Just over eight minutes in, Eggman will confess that Shadow is not an android (as he would claim in some paths Shadow can take in the game), but the same Shadow from Sonic Adventure 2, and that he had one of his robots rescue him from the fall. Near ten minutes, Devil Doom will do an evil laugh at Earth being taken over by the Black Comet, although the battle will still go on. 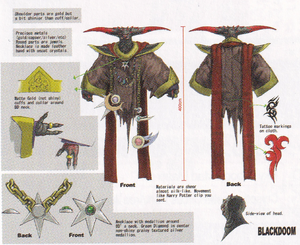 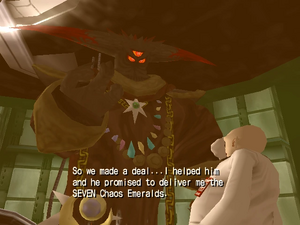 Black Doom in the backstory with Gerald Robotnik. 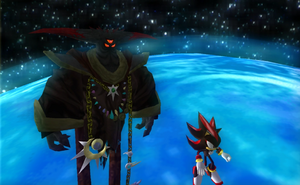 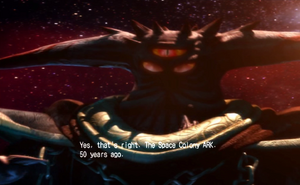 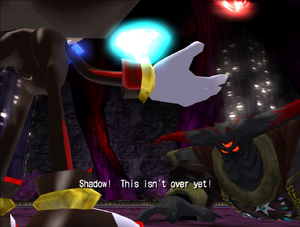 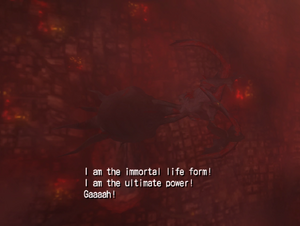 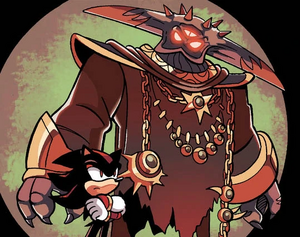 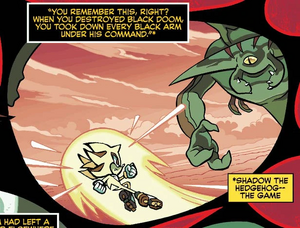 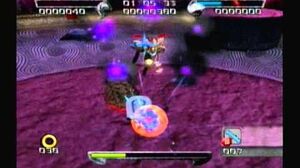 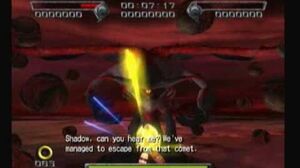