Kill anything that comes near him (failed).

The Black Dragon Kalameet, or Kalameet for short, is the secondary antagonist and an optional boss of the Artorias of the Abyss DLC for Dark Souls.

Kalameet is one of the known surviving Ancient Dragons beside Seath the Scaleless and the Stone Dragon in Ash Lake thanks to its ferocity and great powers. He was regarded as the bringer of calamity due to his power alone. The mightiest knights of Anor Londo who managed to slaughter most of his kin dare not to challenge him out of fear of his wrath.

During the Chosen Undead's visit to Oolacile via time portal created by Manus as seen in the game's DLC, the player briefly encountered the dragon where he swoops in for the bridge in front of him/her out of blue, silently stares at him/her before flying off. He then flies off to an area not far from where the player encountered the corrupted form of Knight Artorias, in a pit surrounded by waterfalls. Kalameet will spray the whole area with black flames should the player dare to enter the pit until they die or manage to escape.

Later, when the Chosen Undead unlocks the tower containing Hawkeye Gough, if the player has encountered Kalameet in the waterfall pit beforehand, Gough will ask the player if they seek to defeat Kalameet. Should they agree, he will shoot a great arrow straight into one of Kalameet's wing, permanently grounding him. This will allow the Chosen Undead to fairly face Kalameet in battle.

Even with a crippled wing and his large size, Kalameet is a very agile opponent, breathing flames that can cover a large majority of the arena. His most dangerous move is when he stands on his hind legs and emits a bright shine and screech from the gem on his head. If the player is in front of him during this attack, they could be lifted into the air and be cursed under the "Mark of Calamity", in which they will take twice the amount of damage for a minute.

Should the Chosen Undead prevail, they slay the vicious dragon and end his days of spreading calamity. He drops the Calamity Ring, which serves no purpose other than placing the player under a permanent Mark of Calamity. Afterwards, Gough will praise the Chosen Undead with Lord Gwyn's blessing and give them his greatbow now that his days of sniping dragons are done.

Following Kalameet's death, the Dragon Knights of Dark Souls II used scales from his amputated tail to construct weapons and armor. In Dark Souls III, his fossilized body was found and preserved in the Dragon-Kin Mausoleum of Archdragon Keep, gifting the player a Calamity Ring if they perform the "Path of the Dragon" gesture in front of his corpse.

Kalameet is a large black dragon with multiple spines coming from his back. His face is slender with the center implanted with an eye-like red gem that shines bright when Kalameet marks his opponents with calamity. 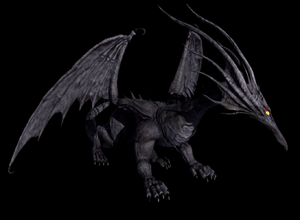 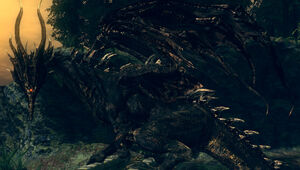 Kalameet on the Royal Woods bridge. 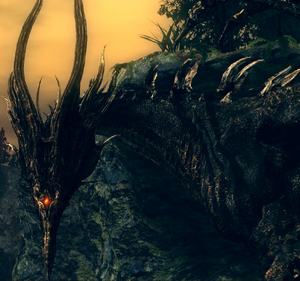 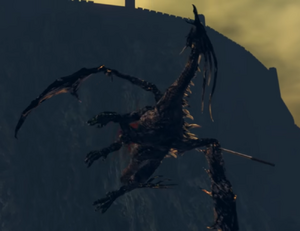 Kalameet having his wing crippled by Hawkeye Gough's great arrow. 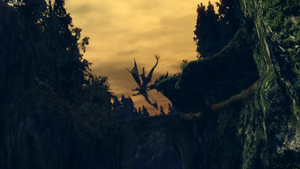 The wounded Kalameet plummets from the air down to his lair. 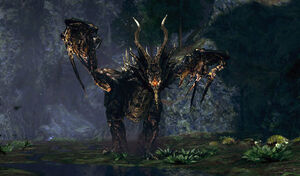 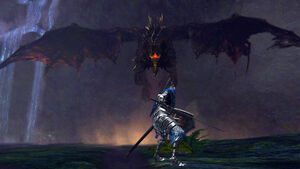 Kalameet charging at the Chosen Undead in Artorias' armor. 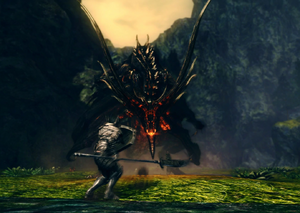 Kalameet marking the Chosen Undead with the Mark of Calamity. 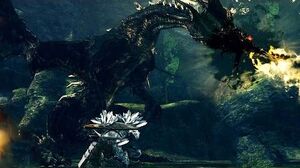 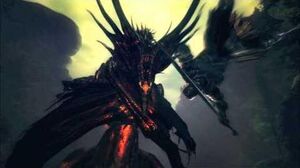