Black Ghost is an enigmatic arms-dealing organization serving as the main antagonists of the Cyborg 009 franchise. Their technology is among the most advanced on Earth. They seek to start wars around the globe so they can make money selling their weapons to both sides of the conflict.

They are responsible for abducting the people who would eventually become the 00 Cyborgs. However, the cyborgs were able to escape with help from Dr. Gilmore, a former Black Ghost scientist who turned against the organization, and from then on dedicated themselves to fighting it.

Black Ghost has existed since World War II, though its exact foundation is unknown and it likely has been active prior. Cyborg 009 vs. Devilman suggests that Black Ghost was formed from the merging of multiple multinational corporations post-World War I. It is even hinted that Black Ghost may have played a role in the Holocaust.

Since its inception, Black Ghost has enticed many scientists to come work for it. While some, like Dr. Gilmore, were deceived into joining it, others, like Dr. Gaia, became members of the organization for power. The organization garnered massive profit from selling weapons to rival sides of a conflict, forcing the other side to also buy their weapons in order to match up. With the dawn of the Cold War, Black Ghost was able to exploit the tensions between the two countries to sell its advanced weaponry, expanding its influence across the globe.

Black Ghost would soon begin development of its 00 Cyborg line, planning to bring about a new age of warfare fought exclusively by cyborg soldiers. To gather test subjects for the line, Skull sent operatives of Black Ghost across the globe to kidnap people. These included Ivan Whisky, the voluntarily given up infant child of Black Ghost researcher Gamo Whisky, Jet Link, a New York gang member and fugitive, Francoise Arnoul, a French ballerina, Albert Heinrich an East German citizen who attempted to flee to West Germany, Geronimo Jr., a Native American laborer sold out by his boss, Chang Changku, a Chinese chef who attempted suicide, Great Britain, an actor from England, Pyunma, a slave in Africa, and Joe Shimamura, an orphaned boy framed for the murder of a Catholic priest. In the Cyborg Soldier anime, it is specified that a time gap existed between the creation of the first five cyborgs and the later four models in the 00 line. Cyborgs 001-005, produced in the 1960s, possessed design flaws that Black Ghost was unable to fix with their current technology at the time, and were put in stasis until technology became more advanced. They were thawed out in 2001, and Cyborgs 006-009 were added to the 00 line.

However, it was by this point that one of the scientists working on the project, Dr. Gilmore, had a change of heart and decided to help the cyborgs break out of the Black Ghost laboratories. Ivan used his psychic powers to have 009 awaken prematurely and guide him out of Black Ghost's base to join the rest of the cyborgs. From then on, Black Ghost began dedicating their efforts to either recovering or killing the 00 Cyborgs, sending out several of their newer cyborgs to fight them.

In the 2001 anime, the organization was seemingly brought to an end when the 00 Cyborgs infiltrated one of Black Ghost's main bases and defeated Skull before blowing the base up. Despite this, the 00 Cyborgs would encounter remnants of the organization from time to time, such as Dr. Gaia and his Mythos Cyborgs or the Monster Island Scientists. Eventually, the 00 Cyborgs discovered that they had not defeated the organization, but simply pushed it farther underground, both figuratively and literally, as the Black Ghost had set up shop in the underground Yomi Kingdom, using the kingdom's people and resources to further the completion of their ultimate weapon, the Demon Statue. The previous rulers of Yomi were a race of lizardmen called the Zattan, who had enslaved Yomi's other native race the Pu'Awak, but Black Ghost were easily able to drive them out and reduce them to near extinction with their army of robotic infantry.

After encountering Helen, Princess of the Pu'Awak, the 00 Cyborgs discovered Black Ghost's operations and were led underground by Helen and her sister Vena. The 00 Cyborgs defeated Van Vogt, the Black Ghost operative overseeing the development of the weapon, but were unable to prevent the statue's takeoff. However, Cyborg 001 was able to teleport 009 inside the statue. The heroic cyborg found himself face-to-face with Skull, who had somehow managed to survive his previous encounter with the cyborgs, and the true leaders of Black Ghost, three gigantic brains. 009 and Skull engaged in a brutal and combative battle that ultimately ended when the brains killed Skull to prevent him from causing any internal damage to the statue with his ultimate attack. This didn't stop 009 from shooting the interior and causing the statue to begin to explode. However, the Black Ghost brains told 009 that they were only a "cell" in a network of Black Ghost and that, as long as there is evil, Black Ghost would continue to exist in the universe.

Black Ghost appear as the main antagonists of the 1966 Cyborg 009 movie. Their leader at first appears to be Beagle, but he is revealed at the end of the movie to be a subordinate of a mysterious entity calling itself the "Black Ghost Leader".

Black Ghost appears as a major faction in the 2007 Skull Man anime, where they operate under the front of a multinational company known as Brain Gear (with the company's initials BG hinting at the connection). They are partnered with the Otomo Concern and are interested in the Skull Man suit for its tremendous powers.

Van Vogt appears as an executive of Brain Gear under the alias "Alucard Van Vogt" along with his secretary Helen and Dr. Gamo Whisky. Brain Gear is also shown to have in its arsenal a series of five highly advanced cyborgs known as the SIRKS, which each resemble 002, 004, 005, 006 and 008 of the 00 Cyborgs.

At the end of the anime, Hayato Mikogami, the second Skull Man, is taken over by the Skull Man suit and transformed into Skull. After being taken in by Brain Gear and undergoing further cybernetic enhancements, Skull takes his place as leader of the Black Ghost organization, pledging to embody their goals.

Black Ghost appear in Cyborg 009 vs. Devilman in the form of Dr. Adams Teufel and his High-Teen Number Cyborgs. They are responsible for allowing Atun to manifest on Earth by providing him with the body of Seth to possess.

The ending of the movie also foreshadows the "Underground Empire of Yomi" arc of the manga, which features the 00 Cyborgs' final battle against Black Ghost.

The first episode features a flashback to 009's final confrontation with Black Ghost in the inside of the Demon Statue. It is later stated by the cyborgs that, despite Black Ghost's claims of eternity, they were eventually able to track down and destroy every last bit of Black Ghost.

The basic infantrymen working for the Black Ghost organization. They resemble SWAT commandos and wear helmets that cover their face above the nose. They carry various firearms, but their main weapons seem to be tommy gun-like semiautomatic rifles. They can commonly be seen guarding Black Ghost installations or being sent out to fight the 00 Cyborgs. They also pilot several of Black Ghost's more advanced military vehicles, such as tanks and airplanes.

Black Ghost Soldiers appear as the main combatants of Black Ghost in most Cyborg 009 media. In the anime Cyborg 009: The Cyborg Soldier they make few appearances after season one as they look to have been replaced by the V2 Cyborgmen and Van Vogt's cyclopean robots.

Squads of BG Soldiers were sent out to stop 009 and the other 00 Cyborgs when they broke loose and attempted to escape the Black Ghost facility. Due to the cyborgs' advanced technology, the soldiers did not fair well against them and most ended up retreating.

Several more Black Ghost Soldiers were seen manning Captain Zanburozu's ship during the mission to recover Cyborg 0013's brain. In addition, Zanburozu also gave Dr. Beruku a new recruit soldier to assist him in his mission, hoping that the trainee would be able to learn something from the doctor.

Many Black Ghost Soldiers served under an unnamed Black Ghost Commander at a Black Ghost compound in the Antarctic. They were presumably killed in the destruction of the compound.

Black Ghost Soldiers also piloted Commander Farej's stingray-like ship during his mission to capture the 00 Cyborgs. When Farej brought them back to the Black Ghost headquarters, dozens of BG Soldiers could be seen guarding the base. These soldiers later fought against the 00 Cyborgs when they infiltrated the base.

The Black Ghost Soldier corps appears to have been disbanded some time after the 00 Cyborgs destroyed the Black Ghost HQ, possibly due to the disorder the destruction of Black Ghost's main base had caused.

Robotic versions of basic Black Ghost soldiers. They appear to be significantly more competent than their human counterparts, yet they fare just as well against the 00 Cyborgs.

They appear in the first few episodes of the anime to oppose the 00 Cyborgs during their escape from Black Ghost. When the 00 Cyborgs broke out of the Black Ghost facility, Robot Soldiers were sent to kill them alongside regular Black Ghost Soldiers. Both sets of infantrymen were unable to hold off the nine cyborgs and were fended off by the cyborg team.

The rest were presumably destroyed when Skarr detonated the explosives inside the facility.

Giant Robots produced by Black Ghost that tower over normal humans. They were deployed against 009 when he attempted to escape a Black Ghost facility. Despite their superior strength, they were unable to defeat the cyborg soldier and were all destroyed by him.

Robots resembling large dinosaurs that were sent to stop the 00 Cyborgs from escaping in the Dolphin after they infiltrated Commander Skarr's factory. They were capable of firing missiles from compartments in their mouths. 004 and 009 managed to fend them off, with them presumably being destroyed when the facility collapsed after Skarr detonated it's self-destruct system.

Robots resembling rhinoceros beetles, the 00 Cyborgs encounter them at the facility containing the Black Falcon prototype. They tower over regular humans and are equipped with razor sharp metal claws. In the anime, they are under the command of Commander Skarr.

Snake-like robot soldiers manufactured at an abandoned Black Ghost factory on a remote island. The factory was discovered by Cyborgs 005, 006 and 007, who unintentionally re-initiated the production of the Snake Robots when they turned on the facility's generator.

They are equipped with metal tentacles on either side of their body, each containing a laser gun at the tip.

Cycloptic robots under the command of Van Vogt that appear in the "Underground Empire of Yomi" arc. They are capable firing lasers and incapacitating people with a sticky elastic substance they emit from their chests.

The Cyclops Robots were used by Van Vogt to drive the Zattan out from the Yomi Kingdom, allowing Black Ghost to take control of the underground society.

Cyclops Robots were soon seen patrolling and guarding the Yomi Kingdom. A squad of them caught sight of and captured Dr. Gilmore and Cyborgs 006, 007 and 008, presenting them to Van Vogt so he could determine what to do with them. Soon after another squad incapacitated Cyborg 004 and Vena. 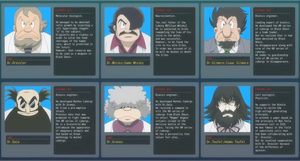 The scientists of Black Ghost. 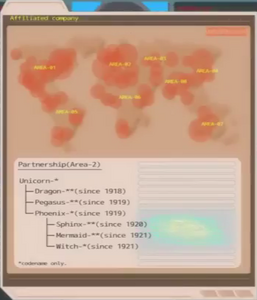 A map of Black Ghost's network of affiliates.

The executive board of Black Ghost in the manga.

A meeting of Black Ghost's benefactors. 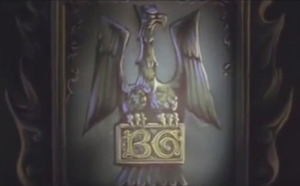 The logo of Black Ghost in Cyborg 009: Monster Wars 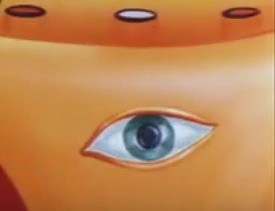 Eyes seen around the base of Black Ghost in the 1966 Cyborg 009 movie. 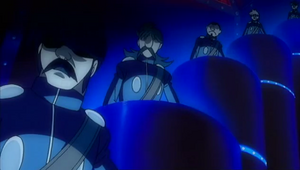 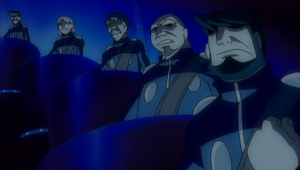 More members of the council. 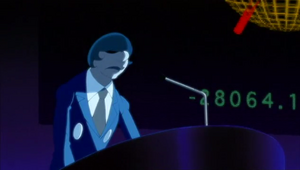 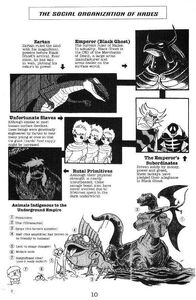 Hierarchy of the Black Ghost occupation of Yomi. 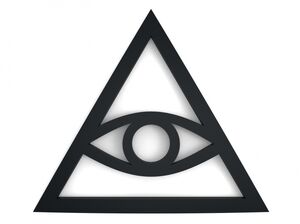 Retrieved from "https://villains.fandom.com/wiki/Black_Ghost?oldid=4176560"
Community content is available under CC-BY-SA unless otherwise noted.