Driving people to insanity or criminality.

Destabilize humanity so it can take over the world.

The Black Goo is a conspiracy theory revolving aroud a supposed demonic entity that is blamed for many paranormal events - almost always of a malevolent nature, the entity itself is said to be a tar-like mass of black goo with sapience, its origins are considered to either be Satanic, extraterrestrial or a form of artificial intelligence depending on the conspiracy theory at play.

The Black Goo is popularized in 1990s culture via the Purity virus from the hit sci-fi TV show The X-Files and derives its name from the Chemical A0-3959X.91-15 substance in the lore of the famous Alien science fiction horror film franchise (which is also simply known as "Black Goo").

As can be expected from a conspiracy theory so connected with mass culture as a whole it is often seen as a hoax, a publicity stunt, or delusion - though it does have a small following that believe the entity to truly exist, some go as far as claiming media depictions of Black Goo (such as in X-Files and Aliens) is all part of the entity's larger plan to desensitize humanity to its presence and prepare them for a future dystopian takeover,

The Black Goo is a mysterious and evil entity that causes victims to become sick, drives them mad or corrupts them into performing every manner of criminal activities - often it is said to emit the smell of sulphur and moves of its own accord - the entity is said to actively take interest in the corruption of those around itself and is linked to either a demonic conspiracy to take over the world or aliens, who also wish to conquer the world : some theories also speculate it as a rogue artificial intelligence akin to the Grey Goo, or a secret weapon utilized by the Illuminati.

The Black Goo is often said to emerge from cracks in the earth but there are also disturbing reports of Black Goo falling from the sky as "rain" or even arriving via space - some have even claimed to witnesses Black Goo materialize out of seeming nothing, wherever it does arrive sickness and unease follows : often when it falls from sky it causes animals and people to get sick and if it washes up on beaches it may cling to skin and cause both mental and physical injuries, to more skeptical minds, these phenomena suggest Black Goo is a pollutant of some description, which is given "malevolent intent" by people's ignorance or panic when encountering such strange phenomena.

Of course on a more symbolic level Black Goo is likely used by many in the conspiracy world to symbolize "big oil" and government greed, which they blame for many (if not all) misfortunes in the modern world.

The most common crime that the Black Goo seems to incite victims into committing is acts of murder, with many who come across the substance claiming that it was influencing their thoughts towards homicide or other acts of extreme violence. 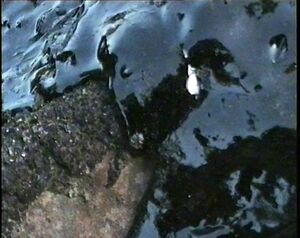 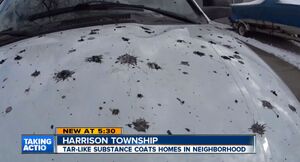