Black Guards are minor antagonists in the 2010 Disney film Tron: Legacy. They are the upgraded version of the original guard programs. They often operate in teams of four.

Black Guards are the commando elite of CLU's forces and also serve as his personal guard. They are a deadly force to be reckoned with, as they are prepared for any mission with their advanced fighting skills and their sheer numbers. After Rinzler, they are the most vicious programs on the Grid.

The Black Guards originated as the Grid's security forces, commanded by Tron, who were either coerced or rectified into their current form around the time of CLU's coup. Rumors hold that no more than thirty Black Guards are on the Grid at one time, but numbers of these elite troops seen in Argon City alone suggest that at least at one time, there were many more.

Black Guards have red-orange circuitry and jet black helmets that leave no part of their faces exposed. They are well equipped for combat, regularly wielding light grenades and identity discs; many are trained to wield more specific baton-generated weapons, such as staffs or swords. Their batons, usually equipped with multiple weapons and vehicle templates, are stored on their forearms, and the two halves can also separate to form a pair of nightsticks. Grenades are arrayed within easy reach along the guards' thighs.

Black Guards commonly uses recognizers for transportation, and on occasion will air drop from these aircraft using dorsal Tron chutes attached to their backs. Many Black Guards can use their batons to provide personal transportation by generating light cycles or light jets.

In TRON: Evolution and TRON: Uprising, the guards are able to deploy personal riot shields.

Before CLU's coup, the Black Guard existed as a white-circuited security force under Tron's command. They first appeared in their current form when CLU and a team of Black Guards with red circuits ambushed Tron and Flynn, with Dyson, the guards' commander, watching from the sidelines. Tron was able to defeat all of the guards easily but was brought down by CLU.

Guards who refused to join CLU's cause willingly, such as Reeve, were forced into service through rectification, which, as described by Dyson, leaves little of the original program's personality. Many, however, chose cooperation over rectification. The unmasked guardsman who aided Beck is an example of a Black Guard with enough of his own will to violate orders for the sake of others.

The guards assisted CLU in the Great Purge, hunting and killing every ISO in the streets. Some of them fought Anon, a prototype system monitor program who was assisting the ISOs. According to Quorra, it was mostly thanks to the Black Guards that CLU won the war against the ISOs.

By 2010, CLU had long since taken complete control of the Grid, and the Black Guards continued to serve as his personal guard. They were dispatched to recapture Sam Flynn at the End of Line Club, sparking a chaotic fight which also involved rebellious patrons taking Sam's side. The rebels were easily overpowered and, despite Quorra's interference, the guards' superior numbers had her and Sam outmatched until the timely arrival of Kevin Flynn. The User's power interfered with their processes so that the club patrons could gain the upper hand, though Quorra was injured before he could intervene. A lone guard was able to snatch the identity disc from Kevin's back as the three escaped, but Castor derezzed him from behind and confiscated the disc instead.

Four more black guards accompanied CLU during his subsequent visit to the End of Line Club. After witnessing the conversation that transpired between Castor and Clu, they planted light grenades in the club before abandoning it and Castor to their fates. A team of four guards also accompanied CLU and Rinzler in their pursuit by light jets of Quorra and the Flynns, which culminated in a dogfight over the Sea of Simulation, during which all four guards were derezzed.

Sora encounters four Guards after chasing a Recognizer. They demand that he state his handle, but Sora does not understand what they meant and introduces himself. However, Sora's name is not recognized as a handle, and he is categorized as a stray program. The guards grab him and pull him towards the Recognizer, but Sora breaks free and escapes.

On Riku's side, some Guards find Riku and categorize him as a stray program. They begin to force him onto the Recognizer, but he brushes them off and boards willingly. When Riku is forced by CLU to participate in the Light Cycle races, the Guards attack him but are easily defeated.

In both TRON: Legacy and Evolution, a team of four guards was seen to attack Tron during the coup in which CLU took control of the Grid; Tron easily defeated the Guards but was brought down by CLU. In Uprising, there were eight Black Guards, and though Tron fought skillfully, he was seen lying helpless with many wounds after the battle was lost but before CLU struck the final blow, leaving unclear whether it had been the Black Guards or CLU who had wounded him so severely. 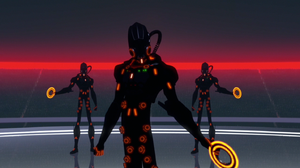 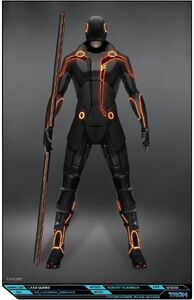