Destroying everything in its path

Black Hole is the sentience force of chaos that shall swallow all the worlds. The main antagonist of Pretty Cure All Stars DX3 and the one responsible for creating Fusion and Bottom.

Dusk Zone, Dark Fall, Nightmare, Eternal, Labyrinth, and the Desert Apostles, after they were defeated by Pretty Cure, their evil energies drifted through space, where they met and united. They were then reborn as an almighty, all-devouring power. The cures struggle to defeat this during the course of the movie as it is the ultimate evil. 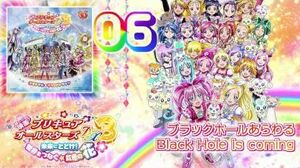