Villains Wiki
Register
Don't have an account?
Sign In
Advertisement
in: Hegemony, Possessed Objects, Evil from the Past,
and 16 more

Rule the world in darkness (failed).

The Black Jewel is the main antagonist of the Gamecube game, Wario World. It is a sentient jewel that Wario collected prior to the events of the game, where it turned Wario's castle into its own domain.

In its dormant state, the Black Jewel appears as an enormous, pear-shaped, purple-colored jewel. When its awake, the jewel develops a single eye with a purple iris and four pink tentacles on its bottom.

Judging from the game's prologue and its only quote, the Black Jewel enjoys bringing torment and misery to others. However, it is quite lethargic, as it lets its minions do all its dirty work while it usually sleeps (of its own accord) in a safe location, only choosing to take action if it has no choice. It is also quite arrogant, which proved to be its own undoing.

The Black Jewel has the ability to absorb energy from the greed of others. Once fully powered up, it has the power to warp reality to its liking and turn inanimate objects into living creatures under its command. In battle, the Black Jewel can shoot deadly lasers and fireballs from its eye and create shock-waves across the ground. It is quite tough, as it took Wario several hits to finally destroy it.

In the game's prologue, it explains that long ago, an evil black jewel fed on the greedy wishes of people, turning their desires into power. Using this power, the Black Jewel created several evil spirits that terrorized the world and all the good creatures that lived on it. However, the mystical Spritelings from the Sacred Forest were able to overpower it with their magic, rendering it dormant. They then hid the evil jewel deep within their ruins, where it remained for many years.

But then, centuries later, the terrible treasure hunter, Wario discovered the ruins and was able to find the Black Jewel within it. Not knowing of its dreadful power, Wario took the jewel back to his private castle and placed it with a chest within a room filled with other treasure chests. There, it was able to constantly feed on Wario's greedy energy while it slept within its chest.

Upon reaching full power, the Black Jewel then finally made its move. As Wario sat on his throne and laughed about his amazing treasure horde, a sudden earthquake occurred, shaking up the whole castle and causing Wario to tumble from his seat. The Black Jewel then bursted from it chest and assumed its true form. Wario was then forced to watch as the jewel began rearranging his palace to a strange dimension and turn all of his hard-earned wealth into terrible monsters.

When Wario comes to, he realizes what had happened and becomes filled with rage, vowing to retrieve his treasure and destroy the Black Jewel completely as revenge. However, the jewel had hid itself away within a much bigger chest than before that was indestructible. Even Wario's impressive strength was nothing to it. In order to get to the jewel, Wario would have to travel to each of the different areas in the dimension and pound his way through thousands of enemies until reaching the main boss of said area, defeating them and retrieving one of four massive keys in order to unlock the chest. Wario would also have to rescue the Spritelings, who attempted to subdue the Black Jewel again after it reawakened, only to end up imprisoned in boxes scattered across the dimension.

Upon approaching the chest after the last key is found, Wario is greeted to the sight of the Black Jewel emerging from its slumber. Frustrated at how far Wario had gotten, the jewel decided to eliminate Wario personally, destroying the dimension they were in and creating an arena for them to fight in. It also entraps the Spritelings within crystals surrounding the arena to watch their savior die in front of them. But this action proves to be its downfall, as by freeing the Spritelings, Wario can allow them to attack the jewel, making it dizzy and allowing him to use one his special suplex moves on it. After several moves on it, the jewel will begin crying in defeat before exploding into millions of pieces, ending its threat once and for all.

Despite the Black Jewel being destroyed, it did not restore Wario's castle (likely the jewel destroyed the dimension they were in to keep this from happening the case of its demise as a final act of spite), and Wario was left inside an empty realm. However, he was then approached by the Spritelings, who were grateful to Wario for destroying the jewel and thanked him by building him a new castle to live in. 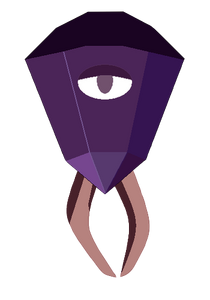